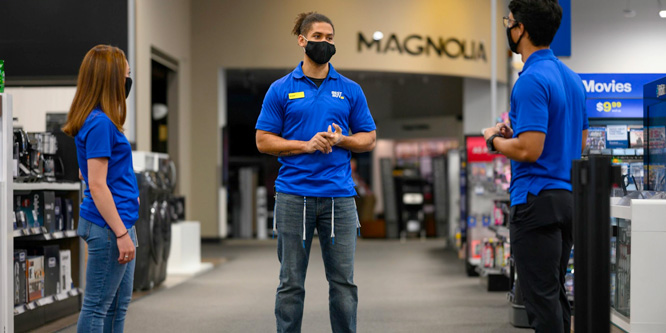 Best Buy is laying off an unspecified number of associates in stores across the country in what is widely seen as a cost-cutting move after the chain last month lowered its annual sales and profit forecast.

The retailer did not quantify the number of workers that would be affected by the layoffs as it responded to The Wall Street Journal, which broke the story, and other media outlets.

“We’re always evaluating and evolving our teams to make sure we’re serving our customers,” Best Buy said in a statement. ‘With an ever-changing macroeconomic environment, including customers shopping more digitally than ever, we have made adjustments to our teams that include eliminating a small number of roles.”

The chain did not specify how cutting front line workers would result in improving or maintaining its customer service levels.

Best Buy last month cut its forecast for the second quarter. The company now expects that its same-store sales will fall 13 percent compared to a 19.6 percent gain during the same period last year. The retailer now expects that its operating income for the year will come in around four percent. Its previous guidance expected results in the 5.2 to 5.4 percent range.

Following the forecast, Best Buy said that it would “continue to actively assess further actions to manage profitability going forward.” It’s not clear from the reporting if the latest job cuts are part of those actions or if they were in the chain’s plans at an earlier time.

Also unclear is how the latest job cuts will affect morale on Best Buy’s front line. The company, which was frequently lauded near the start of the pandemic for looking after its workers, came under criticism after it laid off store associates at a time when federal stimulus checks and changing consumer behavior were working in its favor.

The chain’s own workers took issue with a lack of transparency around layoffs and other actions such as cutting staff hours. Morale took a hit as associates, who had been praised for their work during much of the pandemic, found themselves blindsided by the move. The Journal reports that layoffs at the time became known internally as “the snap,” a reference to the Thanos character in “Avengers: Infinity War” who erased half of all life in the universe with a snap of his fingers.

DISCUSSION QUESTIONS: How should retailers calculate cost savings versus the cost to morale when cutting front line workers? Do you expect that more retailers will cut store-level jobs before the year is over?

Please practice The RetailWire Golden Rule when submitting your comments.
Braintrust
"Best Buy was one of the big winners when the pandemic hit, and it’s not surprising that they’re now making more adjustments to make their financial targets."

13 Comments on "What will store-level job cuts mean for Best Buy’s front line and bottom line?"

It’s always sad to see people lose their jobs, and especially front-line workers. It’s a fine line to balance the impact on morale vs. business results – unfortunately, business results will almost always win. Best Buy was one of the big winners when the pandemic hit, and it’s not surprising that they’re now making more adjustments to make their financial targets. While the consumer is back and strong, there is still plenty of uncertainty and churn, so I do expect to see more retailers make expense reductions.

Cutting workers in response to decreased sales is an absolute necessity for any retailer to survive. We will see much more of this as small retailers have to cope with decreased demand over the holiday season, and immediately after. Retailers have to first worry about the survival of their business, then worry about customer service before worrying about morale. We are in a tragic position with so many open jobs and so few workers willing to work them. This is a unique scenario for the U.S. that we have to address in a direct way for our open market system to continue to survive.

We spent the weekend at Best Buy (shopping for kitchen appliances), so this is very top of mind. Cutting for the sake of cutting is never a good idea, especially when the ability to re-hire these people at some point is questionable (because of labor shortages). That said, could you cut some people at the store I was at? You bet. We had a great salesman on round 2, not so much on round 1.

Down 13 percent after being up almost 20 percent? Of course they are trimming payroll. Retailers have to flex with business conditions, both up and down. The real question is how, and with what level of transparency and humanity.

SGA expenses (employees) are normally one of the biggest line items in any P&L, and during periods where revenue falls short of expectations, management’s initial move is to cut associates. It stinks for morale, for in-store relationships and can tarnish the overall customer experience. Management should do everything they can to curb expenses in other areas of the business before eliminating jobs but for most companies, cutting roles is the norm. Unfortunately, given the current financial dynamics we’re seeing in the market, more jobs will be on the chopping block before end of year.

Employees want hours, they couldn’t care less about morale or creating a spirit of happiness. It is all transactional at retail. Best Buy needs well informed, trained personnel to help the shopper with smart TVs, appliances, high-end music components, smartphones and car stereos. The Blue Crew or Geek Squad agents likewise provide a valuable service, assuming they take the item in need of repair which has not been the case for a laptop nor a printer in the past. Best Buy needs to be profitable in order to satisfy shareholders, no surprise there. You hit the proverbial slippery slope when the store has zero buzz, you have to wait for way too long to get some advice and that leads to customers abandoning the physical store in favor of online purchasing. Let alone ordering an Arris modem three times through the channel and having all three attempts fail to deliver. Not a happy picture. And pay $199.95 for their TotalTech membership? Nope.

Best Buy’s job cuts, which come off the back of its previous warning that sales had slowed, is yet another example of a retailer reshaping itself to a new demand environment. Electricals, which is Best Buy’s area of focus, has been particularly hard hit as it requires not only cash but confidence to buy many of the big-ticket items. Against this backdrop of declining sales, Best Buy needs to retool its operations so that it is not overstaffed and pressuring its bottom line. As long as this is done without too much of an adverse impact on customer service, Best Buy should be fine.

As I have noted many times on this forum, retailers too often see front-line workers as an expense rather than an asset. While I don’t support the idea of a company being charitable and keeping workers they don’t need, one must wonder if they have looked hard at any other part of the company first.

Here is my question. When operating profits were up 20 percent, did they hire new people? Not likely. A 20 percent uptick versus today’s 13 percent drop still gets them positive results two years ago. Maybe the profit pressure has nothing to do with the front-line workers.

Of course, there will be cost cutting and workers who lose their jobs suffer the consequences. To ensure that the current level of sales is not overly impacted by low morale (there’s no escape), retailers need to look at the stores and their workers holistically. What can retailers do to motivate their current employees? Perhaps staff doesn’t want to hear about the “why” for cutting frontline workers. However they will be interested in “how” the retailer makes sure they don’t keep looking over their shoulder but instead focus on the customer and sales.

Every retailer has to make adjustments to their store operations, including frontline staff, as their sales rise and fall. The question becomes, are they adjusting with a short-term lens, or a long-term view?

For Best Buy, are they looking ahead to the holiday shopping season and asking themselves if they will be able to hire any additional staff at that time and train them to be effective/productive versus the ongoing cost of keeping existing staff. It’s curious they are reducing staff right at the end of the back-to-school season.

Best Buy’s product assortment leans to items that have long lifecycles with consumers — you won’t find consumers buying a new laptop or TV, or even a smartphone, every season or every year, and often less frequently than every 2 years. The pandemic caused a surge in sales of these items for Best Buy, but now most of those consumers do not need to refresh those devices. It would be interesting to see if these cuts are occurring in Geek Squad vs purely sales floor staff.

Labor is a big part of the cost in retailing and as forecasts show declining sales, you have to make the tough decision to make the cut early, whether it is store or headquarters staffing. The key is the why — did BBY overstaff expecting a rebound in store shopping after COVID or to cover for short staffing due to staff absentee from COVID? In either case, if the revenue shortfall is expected, they will have to cut costs.

Watching costs in a challenging environment is smart but for me always brings to mind the old adage that you can’t save yourself into profitability. If you have too many store people the real problem is you don’t have enough customers.

Braintrust
"Best Buy was one of the big winners when the pandemic hit, and it’s not surprising that they’re now making more adjustments to make their financial targets."