Will a robot chip away at Chipotle’s labor issues? 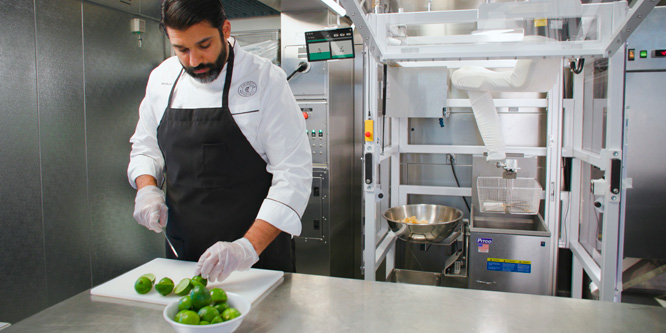 While ingredient scooping and burrito rolling remain in the hands of human staff at Chipotle for now, tortilla chip-making duties at the chain may soon be managed by robots.

Chipotle is beginning to pilot an artificial intelligence-based tortilla chip-making robot named Chippy, first in its innovation hub and then in select locations, to determine the value of a potential nationwide rollout, according to USA Today. Chippy is capable of automatically mixing tortilla chip ingredients and frying them, replicating tasks usually done by staff. The robot is a product of Miso Robotics, a startup which is also responsible for the hamburger-making robot Flippy 2 currently being piloted at White Castle.

Though picking and packing robots have quickly become common fixtures in the grocery world, moves to automate food preparation in the quick service restaurant (QSR) space have proceeded more slowly. Still, a number of robotic food prep solutions have been introduced to restaurant kitchens over the past few years.

For instance Creator, a restaurant known for its fully automated robot chef, reopened in summer, 2021 with a new iteration of its technology that allows visitors to customize their order via app, The Spoon reported.

More food prep robots appear to be on the way, as well. Startup Hyphen said that it will be deploying its salad preparation conveyor belt robot, Makeline, to five markets within the next two years, according to TechCrunch.

Restaurant robots have also been appearing in the front of the house.

Bear Robotics has deployed its robot Servi, which has so far rolled out food to 28 million restaurant tables to date, according to The Robot Report.

Flippy is probably the most famous of the food service robots so far. Its first iteration, which was deployed in regional fast-food chain Caliburger, inspired both excitement over the futuristic technology and fears that it would result in the loss of jobs.

Similar concerns arose elsewhere in the fast food world when McDonald’s announced, in 2018, that it would be expanding its self-service touchscreen ordering kiosks to all of its locations. Critics saw the move as threatening to automate away cashier jobs.

DISCUSSION QUESTIONS: What roles do you see robots playing  in restaurants over the next five years? What will this mean for how restaurants use human labor?

Please practice The RetailWire Golden Rule when submitting your comments.
Braintrust
"Chefs will not be replaced; they will work alongside collaborative robots that perform menial tasks. As such, employees will gain more time to focus on service excellence."

"If Chipotle goes this route, though, one thing they should avoid is using androids—unless they license R2D2s, C3POs, and BB8s. But they’d pay much less for entry-level humans."

"Robots are making your phones, your computers and your automobiles. Certainly, those activities must be more challenging than anything that can be made in QSR."

18 Comments on "Will a robot chip away at Chipotle’s labor issues?"

Eventually, robots could be running all functions in a restaurant. These examples are indicative of what’s already possible. I expect to see rapid advancement of restaurant robots as the cost and availability of labor remain challenges, and therefore make the ROI on deploying this sophisticated technology more acceptable.

I’ve had my food delivered by a robotic server twice in the last two weeks. So if robots are bringing food, what’s to stop them from making food? Robots are likely the answer to labor shortages and, as long as you remember to charge them overnight, they don’t call in sick. Or post TikTok videos about bad customer behavior, steal from you, or violate the dress code. 🙂

Lol — you left out cough on your food!

At the MURTEC conference a couple weeks ago, several restaurants shared their robotics pilots and plans for the future. Most of the use cases discussed were in the front of the house such as delivering food and busing tables. Using robots for distributing food and dishes from the kitchen and back could enable servers to be near their guests at all times. This would go a long way in improving guest satisfaction.

In QSR, it might as well be all robots. It’s cheap, they pay poorly, and service is what it is.

In regular restaurants, I just don’t see it. The personal touch is important.

Chefs will not be replaced; they will work alongside collaborative robots that perform menial tasks. As such, employees will gain more time to focus on service excellence.

Here’s the reality: robotics in restaurants and retail are here to stay as the price of people goes up and the number of people who want to work these jobs shrinks. To operators it’s all about the ROI. If they can cost justify, it will happen. And that is clearly the case with self-service ordering. Restaurants and retailers need to pick the right processes and partners to make this happen or else it will be time for “Danger, danger, Will Robinson!”

Chipotle could automate their frontline order-building process, but the customer experience would change completely. In some aspects, for the better. If Chipotle goes this route, though, one thing they should avoid is using androids—unless they license R2D2s, C3POs, and BB8s. But they’d pay much less for entry-level humans than for that.

Things happen slowly here in the states. Mostly due to the sheer size and scope of many enterprises in turn demanding a huge capital expense. Go to Canada and you are handed a device to swipe your credit card or debit at the table to check out – no register or employee to man it required. Go to a McDonald’s and custom order your Big Mac with extra cheese and special sauce plus extra pickles from a kiosk plus pay at the same device. Self-service, less employees on the floor of the store and automation will significantly reduce the retail, restaurant and service industry workforce in the next 20 years. P.S. There always appears to be way too many employees working food prep at Chipotle.

Leveraging the power of robotics and automated processes is an emerging trend across the restaurant, grocery, retail, supply chain distribution, and fulfillment functions. Given the imperative to reduce the cost to serve, streamline operations, accelerate turnaround times, and optimize processes, we expect robotics to play an even more significant role for Chipotle and many other restaurant operations.

The robotics value proposition is mainly tied to those quick service restaurants that have now shifted their operating models during the pandemic to serve mobile orders, BOPIS, and curbside pickup. It is challenging to turn around orders quickly and efficiently without sacrificing quality, service, and value. It will take time to perfect this new model. However robotics do not have a place in the foreseeable future in the finer restaurants, where service, artistry, and the experience rule.

Robotics in the restaurant industry will help reduce labor costs and have a significant impact on reducing food waste and increasing customer satisfaction. Every item on the menu will always be prepared exactly the same way, and portion control will be perfect.
Overall a win-win.

Robots are making your phones, your computers and your automobiles. Certainly, those activities must be more challenging than anything that can be made in QSR.

Can we imagine an all robot QSR?

Robots are a part of any restaurant’s future because they allow for better, more improved use of our limited human resources. This helps labor issues and improves overall production, the workplace and happiness of the workers.

Automate what you can, and let humans take care of the rest. Outside of labor issues, Chipotle has faced challenges accommodating the online orders for delivery apps and pick-ups. They should be trying to streamline as much as they can or they will face a slow erosion of their customer base that’s sick of waiting 45 minutes past the promised order time.

They will be widely deployed because QSRs can”t find people to do menial tasks at low wages. Imagine that. Re: Chipotle, just hope they don’t screw up the “food show” that Chipotle has always been so good at. It’s a huge part of the experience (I’m sure Steve Ells is rolling over on his ski lift right now on this one).

Making chips and cooking a meal are two wildly different things. We’re a long way from having robots do the actual cooking. That said there are plenty of tasks that can be automated. Given the labor issues, there will be pressure to innovate in this space and add more automation to the industry.

The aspect of giving the robot a cute name seems faddish and tone deaf for both staff and customer. Imagine being told that your job has now been taken over by “Chippy,” or that the delicious fresh burrito you see in our ads is now made by an a.i. assembly line. Are there any benefits here for consumers? Are prices going down? Are those replaced workers being retrained for new and more fulfilling work? Automating processes which are time consuming for humans, or difficult/unappealing for humans is smart — but there is serious dissonance if that process drains the humanity from your business.

Love the idea that robots can take on some kitchen production tasks, which would allow employees to create more, and do more of the things they truly love or have a passion for. Cost savings and consistency will be one of the outcomes.

Best tread carefully with robots in front of house, though. Problem solving, friendly interaction, building trust and theater are best left to the human touch (I doubt anyone wants more service interactions like the voice automated phone trees we’ve been conditioned to use).

I believe robots are the best fit for performing tasks that are monotonous and repeatable in nature. And needless to say, restaurants are one such place where these factors apply. Restaurants have standardized recipes and require the least customizations. Robots can propose a few pre-decided ingredients to opt from, thereby reducing manual tasks for employees and eliminating choice paralysis for the customers. However before diving headlong into deploying robots, restaurants would need to ensure that these automation machines are used only to perform simple and uncomplicated tasks rather than straightaway leveraging them for performing mission-critical actions. Or else it might lead to change management issues and longer project duration thereby increasing the chances of failure. Moreover, I feel that technology being a threat to human labor is a complete myth. As far as restaurants are concerned, robots, in fact, will enhance the roles of employees. By deploying robots to perform mundane tasks, restaurant owners can encourage employees to move towards more meaningful responsibilities like customer interactions, where they can add more value. And also speaking… Read more »
0
|
0
-   Share

Braintrust
"Chefs will not be replaced; they will work alongside collaborative robots that perform menial tasks. As such, employees will gain more time to focus on service excellence."

"If Chipotle goes this route, though, one thing they should avoid is using androids—unless they license R2D2s, C3POs, and BB8s. But they’d pay much less for entry-level humans."

"Robots are making your phones, your computers and your automobiles. Certainly, those activities must be more challenging than anything that can be made in QSR."