Will America’s love for paper coupons ever die? 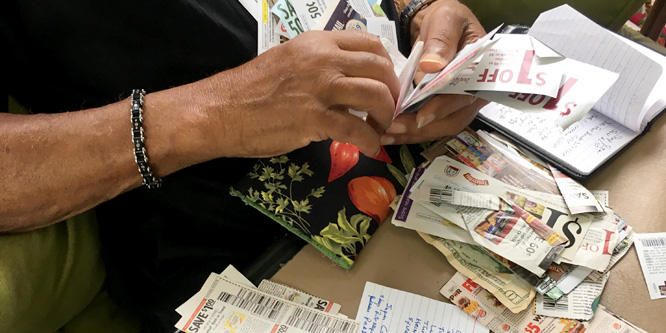 Despite a slight rise in the preference for paperless discounts, more adults still prefer paper coupons, according to the latest annual survey of coupon use from Valassis.

Fully half of adults in the U.S. prefer to get coupons in the mail, a figure that has continued to rise over the past three years. The proportion of respondents who prefer to get coupons from a coupon book found in a newspaper continues to rise as well, from 42 percent last year to 44 percent this year. By comparison, the use of paperless coupons has remained steady at 75 percent for the second year. Paperless coupon use is particularly high among Millennials (96 percent) and parents (92 percent). Parents are also the biggest users of paper coupons, with 95 percent of parents and 96 percent of Millennial parents using coupons received in the mail, newspaper, at the store or printed from their computer.

Data last year from Kantar Media showed that even as the number of paper coupons circulated had dropped by 12 percent and digital promotion offers significantly grew, the number of digital coupons available is just a small fraction of the overall total. Kantar Media’s analysis found manufacturers distributed about 34 times more print than digital coupons in the first half of 2018.

DISCUSSION QUESTIONS: What’s supporting the strong bond between consumers and paper coupons? Do you see a gradual phase to higher usage of digital coupons or a tipping point that accelerates the shift?

Please practice The RetailWire Golden Rule when submitting your comments.
Braintrust
"I wonder if it has something to do with a preference for physical things in a physical world."

"The coupon is the retailer winking at the shopper to, “go ahead, hack our system, we’ll give you back a slice of the markup pie.”"

"The paper coupon is a visible reminder, whereas the electronic coupon remains inside a magical, wafer-thin smart device or inside a laptop that may be asleep."

13 Comments on "Will America’s love for paper coupons ever die?"

The paper coupon is a visible reminder, whereas the electronic coupon remains inside a magical, wafer-thin smart device or inside a laptop that may be asleep. It is not unlike the effect that an elegant paper catalog has on the consumer. The paper coupon may die a prolonged death before it disappears.

Paper coupons are still favored by adults because of the comfort and familiarity of the use and redemption process. Adults typically are not as digitally savvy as Millennials and digital natives. People of all ages will use the easiest means to get a lower price – this is simply a case of using the path of least resistance. Perhaps brands can further incent older adults to not fear the process and educate how to collect and redeem digital coupons?

Truth be known that we like hanging on to our roots despite the benefits of technological conveniences. Paper is something you can hold, touch and take your time to read. It’s no different from handing a check to someone for $500 and yet realizing that giving them $100 in cash feels better despite it being less valuable. However, we are gradually moving away from cash and paper. It took time for e-books to catch on, and they have yet there are those who still prefer holding a book and reading it. Time will eventually change the old habits as we embrace the new. Moreover, technology will continue to improve with more 3-D opportunities providing similar experiences to that of paper products. I think 50 years from now children will be reading about the time when people used to use cash and paper coupons. We’re not ready to say goodbye to our old habits but eventually, we will.

Having watched an extreme couponer in action, it appears to be easier to have a physical coupon when using a multitude of them. Having coupons on your phone works when using just a few. Old habits die hard.

It’s interesting that the survey doesn’t signify what it means by “adults” – it cites Millennials and parents. What’s a parent? Other than Generation Alpha, every generation today could be a parent.

I wonder if it has something to do with a preference for physical things in a physical world. The ergonomics are actually sometimes better with paper. A related example … if I need to speak with an agent at the airport I prefer a physical boarding pass. No waking the phone up, unlock codes, battery levels. On the other hand, I really doubt there is a preference for physical coupons vs. discount codes in e-commerce. Simplicity is important.

Holding money (AKA “coupons”) in your hands is far more compelling than looking for them on your phone. Research needs to be highlighted that focuses on the human side of retail discounting. Although some data conflicts in the article, and although redemption has historically been low for paper coupons, they still seem to be very valuable to consumers of all ages. This will definitely continue to fade, though, as digital coupons become more convenient and intuitive for shoppers.

People love paper because the paperless marketplace is much too cluttered.

I’m sure I could cite oodles of consumer psych studies here focused on the illusion of agency/control in making a purchase, especially if you don’t feel like you have financial agency elsewhere. The coupon is the retailer winking at the shopper to, “go ahead, hack our system, we’ll give you back a slice of the markup pie.” Consumers might be getting weary of having to hack this system. Perhaps the coupon has to evolve beyond paper or phones. What could it look like for retailers to be radically transparent about their pricing in the first place?

I am not surprised that many love the feel of coupons in their wallets/purses. It is physical ownership of the deal. And according to answers we get in coupon conversations with customers and retailers, it is very strong. Not surprising that younger customers will easily support digital; that is all they have grown up with. Now I’ll date myself, I remember when ATMs had customers rebel: “I will not bank with a machine, only with a real person.” Bottom line is that digital will own customers, then the growth curve swings a little longer.

There is still a large number of people that enjoy the satisfaction of clipping coupons and seeing how much they save when they shop. It is like a game for some people. What surprised me was the increase in the percentage of people that prefer to get coupons in the mail.

Personally, I would prefer to get whatever discounts that are available to be automatically applied to my order based on my loyalty status. Making customers jump through hoops (clip coupons) segments customers into groups: those that are cost conscious fanatics and those that are too busy or don’t care about saving an extra $0.50 or $1.00 for a few items.

It’s worth looking at the whole experience not just the paper coupons; there’s a cycle of distribution and redemption that’s sometimes just easier with paper. Digital has a little work to do. I don’t think consumers “want” paper coupons — they just accept them as a known, simple experience.

Separately, Valassis conducting a paper coupon survey is kind of like cigarette companies funding cigarette studies in the ’50s and early ’60s :).

“Ever” is a long time, so I would hesitate to use that word. But so rapidly has the digital world descended upon us that it’s easy to forget that only during the last decade would this discussion even be possible. Translation: most of the world grew up with paper, and old habits die hard. And, of course, regardless of what you grew up with, a piece of paper in your (hand, pocket, etc) provides a ready reminder that a stored image does not.

Paper coupon usage is likely to decline due to the lack of access to paper coupons. Decreases in newspaper and magazine subscriptions as a source of coupons, decline of home printer sales do to mobile devices and cloud storage will make it difficult for consumers to print coupons, excessive junk mail that clutters our physical mailboxes getting tossed or shredded, cost of producing paper coupons and the fact that producing a paper coupon is just not good for the environment which is very important to the younger generation. This generation is paying by smartphone rather than using a physical credit card, so I don’t think we can count on them to use paper coupons in the future.

Braintrust
"I wonder if it has something to do with a preference for physical things in a physical world."

"The coupon is the retailer winking at the shopper to, “go ahead, hack our system, we’ll give you back a slice of the markup pie.”"

"The paper coupon is a visible reminder, whereas the electronic coupon remains inside a magical, wafer-thin smart device or inside a laptop that may be asleep."