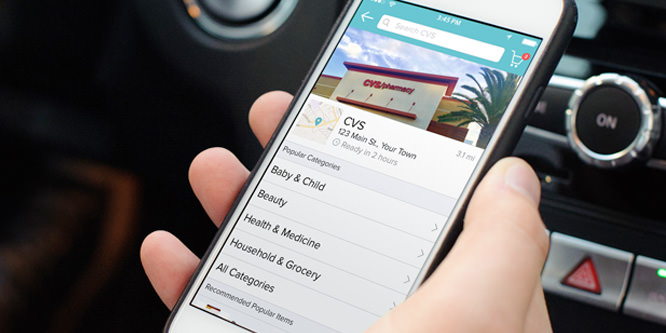 Back in April, CVS announced it was making an investment in Curbside, a third-party service that delivers online orders of non-prescription products to the curbside at no additional charge. The company introduced the service to its customers, which it dubbed CVS Express. Recently, the drugstore chain made the decision to take the program chain-wide and business, according to reports, appears to be very healthy.

The initial chain-wide launch was Sept. 22, but CVS had to push back plans a week when response to the offer was so great that it brought the system to a crawl. Having made the necessary adjustments, CVS now offers curbside pickup at its stores (not including Target locations) across the country and is offering a $10 discount on orders of $20 or more for first-time users. Curbside sends a text message to customers when orders are ready for pickup, usually within an hour of being placed.

According to the Curbside site, offering its service increases monthly visits to stores 2.6 times while increasing new customers by 30 percent. Sixty-one percent of customers who use the service make a repeat purchase. According to a Forbes article, the service is seen as a competitive differentiator against rivals Rite-Aid and Walgreens, which do not offer curbside pickup.

As reported on RetailWire in June, Target made the decision to discontinue offering the Curbside service after making the determination that it made more sense for its business to focus on internal efforts including Cartwheel, in-store pickup and ship from store for online orders.

Target’s chief rival, Walmart, has invested heavily in its own click-and-collect efforts with a particular emphasis on driving grocery sales.

DISCUSSION QUESTIONS: How do you account for some retail chains aggressively pursuing click-and-collect programs while others are remaining hands-off? Will CVS’s curbside program give the chain a substantial edge over retail rivals, including drugstores, convenience stores, etc., that do not offer a similar service?

Please practice The RetailWire Golden Rule when submitting your comments.
Braintrust
"Getting them to the store is great, but getting them inside is even better!"

"Curbside is a point of differentiation as long as others don’t offer the same service."

"Sounds like a great service for convenience if it works without long lines and wait times."

20 Comments on "Will curbside pickup drive front-end sales at CVS?"

Right now, curbside is a novelty. If many chains start to offer it, the novelty will wear off. By offering curbside delivery retailers lose the ability to generate impromptu sales but they gain the element of speed, which is important to many consumers. Each delivery option comes with trade-offs. Retailers need to chose the options that best fit their sales goals and customer needs.

Getting them to the store is great, but getting them inside is even better!

An effective click-and-collect program requires a highly coordinated and sophisticated logistical capability. Not every retailer has the ability to execute this effectively and rightly they remain on the sidelines. While the program appears to be a big win for CVS for now, I expect others will follow in time which will ultimately minimize CVS’ advantage.

The problem with click-and-collect at larger retail stores is that you still have to park the car, go inside, find the counter and the staff who will get your order. The advantage of curbside pickup would seem to be compelling in terms of convenience and saving time.

But I agree with Max on this one … right now it is a novelty. That novelty will wear off as other competitor options unfold. And for the Amazon Prime member there is nothing quite like having the goods delivered right to your door.

It will be very interesting to see how well this curbside pickup works in this winter’s raging blizzards.

If CVS gains any significant edge from Curbside, it’s a given that rivals will follow suit. However, initial results are not a good yardstick to measure long-term success. There is a novelty factor as well as the (effectively) 50 percent discount for first time orders. Further, we have to take the company’s impact statistics with a grain of salt, not knowing exactly how they were generated and based on what sample set.

Long-term — I don’t see how this program can succeed without bringing prescriptions to the curb as well. What if someone wants OTC cough syrup and a vaporizer to go along with the prescription the doctor ordered? Will they get part of the order at the curb and come in just for the prescription? Scenarios like that will meet with resistance and not bode well.

Curbside is a point of differentiation as long as others don’t offer the same service. As such, the costs involved are likely out-weighed by the benefits. However, once other retailers in the same vertical offer Curbside it will simply become a cost of doing business that the retailer absorbs or passes on to the consumer. CVS should enjoy it while it can.

Steve – good point about cost to benefit. Target must have come to the same conclusion as you.

Curbside pickup is appropriate for larger physical purchases (lots of groceries, RTA furniture, Home and Garden, etc.) Who needs curbside pickup for toothpaste, ice-cream, a prescription or Gatorade? I don’t get it.

I have always been a fan of some form of click-and-collect. This final-mile option brings customers to the retail store, allows them to collect the goods ordered online and then proceed into the store with empty baskets (a heuristic of spending) and purchase other items, planned and/or unplanned.

The CVS data supports the success of curbside and is consistent with other research from Walmart (as well as European food retailers) which reported sales as high as two-thirds more when click-and-collect is combined with in-store shopping versus in-store shopping only.

It’s very interesting to track the progress of click-and-collect at different retailers. One would expect that the service would be more popular at a retailer like Target (wide assortment, difficult parking) as opposed to a drug store like CVS (limited assortment, easy parking).

Evidently however, CVS has experienced great results with its click-and-collect test locations. CVS’ success suggests that click-and-collect delivers real value to today’s shoppers, and retailers should redouble their efforts to determine if the model will work for them.

Wow. Fifteen years ago we were talking about ways to keep the customer in the store as long as possible. Retailers are waking up to the fact that customers don’t necessarily want to be in the store at all,

This could be a big benefit to older customers who have a hard time getting around. CVS will want to mount a pretty aggressive awareness campaign, particularly for those customers.

The name of the game for the consumer is convenience so I can certainly see this having appeal. On the other hand, stores such as CVS have never been known for having a lot of workers outside of the pharmacy area. You often have to wait at the front counter for someone to show up at the register because they are multi-tasking. So adding curbside better really drive revenue or the cost for those extra employees may be an issue. Just something to think about.

On paper curbside pickup makes sense. It adds convenience, which is paramount to the shopper experience. However this initiative is not a slam-dunk. Attachment rates, or the ability to attach items to and order and build a basket, can decline due to curbside pickup. Lower AOV is likely to occur, so the retailer must make up for it through better loyalty and lifetime value.

This is another example of old vs. new retail — old retailers think about only today … how to maximize sales to the retailer. New retailers are focusing on service and convenience that drives value to the customer over time, and therefore revenue and profit for the retailer.

Suggestion — when you are bringing items out to the car, bring a few more and help the customer build their basket.

Sounds like a great service for convenience if it works without long lines and wait times. On the surface it might not seem like a good idea to some retailers as it appears to eliminate the need for the customer to go into the store, however perhaps it will drive loyalty and new customers if it works well as customers try this service for known regular goods and then go in-store on other occasions for viewing a greater selection. Time will tell.

Front end sales (the “not pharmacy” stuff in drug stores) are an incredibly important part of the business for retailers like CVS and Walgreens, but competitive pressures have compelled them to invest significantly in drive throughs that currently only allow consumers to pick up prescriptions. It is only natural that CVS would seek a solution to allow its customers that would prefer to not get out of their cars to buy from the front end of the store. I believed 20 years ago, and still do today, that drive-throughs are going to be a very important part of e-commerce logistics systems.

For years I’ve suggested curbside pickup to independent pharmacies who had physical locations that would not permit a drive-thru. In that instance, I believe combining curbside pick-up for a prescription with front-end necessities could work well (and I’ve worked with several who can prove it!).

In the case of CVS, however, I see it as a marketing novelty that will likely not translate into a significant sales lift. The convenience factor is admirable. In my view, the basket-building potential is limited.

I’m sorry, I don’t see how this can work. Unlike, say, a grocery, the average ticket at CVS — other than pharm, which is specifically excluded — can’t be more than a few dollars. Paying people to run these minimal orders outside doesn’t seem cost effective. A competitive “edge”? Only in the sense that losing money on something to gain customers gives you an advantage.

Curbside is all about emphasizing the convenience factor. For customers with limited mobility, or even those with kids in tow and there’s too much hassle getting everyone in and out of the store, curbside might be a slam dunk. I agree with others here that as soon as it becomes available across similar brands, CVS will need to continue showing its customers why they should keep coming back.

According to Walmart’s CEO, new customers are going to their stores because of online pickup. If CVS also attracts new customers, this will likely be a winning strategy.

For CVS it could make sense especially at stores where drive-thru prescriptions are offered. Lots of sick people visit to solely pick up prescriptions — nobody wants to go inside the store or make additional stops to pick up a few items when they’re sick or have a sick person in the car. Curb side would be a great benefit in these times and a good way to increase the basket size. Good service, good business — everyone wins.

Braintrust
"Getting them to the store is great, but getting them inside is even better!"

"Curbside is a point of differentiation as long as others don’t offer the same service."

"Sounds like a great service for convenience if it works without long lines and wait times."