Will dropping prices on cosmetics drive traffic to department stores? 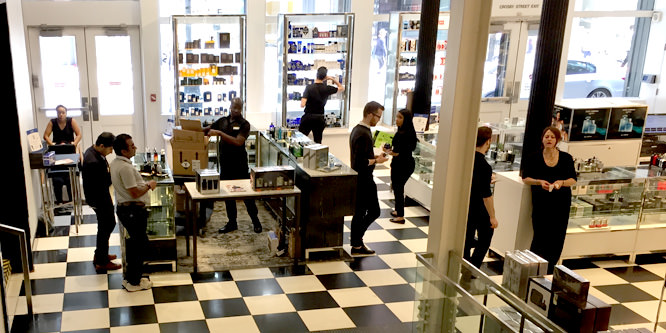 Macy’s and Bloomingdale’s have begun to drop prices on makeup and cosmetics, an area that CNBC reports is rarely involved in promotional sales, store-wide or otherwise. Macy’s has begun to offer a general discount for the products and Bloomingdale’s has offered a loyalty discount both online and in-store for the entire year. Analysts quoted in the article note that dropping prices in a category, then later raising them back to normal, is a strategy that is rarely effective.

The makeup counter remains one of the biggest draws in the otherwise battered category of department store retail. Cosmetics retailer Sephora has been a notable bright spot. The company’s store-within-a-store outlets inside J.C. Penney have been a source of ongoing success despite the department store retailer’s other struggles. A large part of Sephora’s success can be attributed to its omnichannel strategy. The company has innovated unique methods of meeting customer needs and connecting the mobile, online and in-store experiences.

In light of Sephora’s ongoing success it’s easy to see why Macy’s and Bloomingdale’s may want to try increasing the draw of their own makeup counters with more attractive pricing. But trying to compete on price could be a risky maneuver, given that it could set off the type of discount addiction the retailers have experienced in other categories without meaningfully improving store traffic or sales.

There is some indication, however, if pursued correctly, retailers could benefit from focusing on price-sensitive cosmetics shoppers. Moderately-priced cosmetics brands with a quick speed-to-market, like e.l.f. and NYX, have been touted as the beginning of a “fast beauty” trend, comparable to fast fashion in apparel.

DISCUSSION QUESTIONS: Will offering discounts on makeup provide a meaningful lift in sales or traffic for department stores? What other strategies should mall anchors be looking at to leverage their cosmetics offerings given the success of retailers like Sephora?

Please practice The RetailWire Golden Rule when submitting your comments.
Braintrust
"If discounted cosmetics brings someone into a store, there’s little to prod the person further in and up the escalator."

"For department stores to compete, they need to offer the experienced customer support who will be able to increase the value of products sold."

"I guess the question that one should ask is, is the price of cosmetics the reason we are losing traffic?"

15 Comments on "Will dropping prices on cosmetics drive traffic to department stores?"

Discounting to drive traffic is a slippery slope. While price discounting may produce a short-term sales lift (though likely at lower margins), it creates expectations with consumers that may be difficult or impossible to sustain.

While driving store traffic is critical, retailers need to focus more attention on converting the traffic that they do receive. Since many retailers still don’t track traffic or measure conversion rates in their stores, one has to wonder how many sales opportunities are missed because retailers don’t fully understand where and how many sales opportunities they are failing to convert. Before retailers start slashing prices, they should focus more attention on optimizing conversion rates in their stores.

Desperation is never a good strategy to compete — this is desperation. I can imagine last-call, slightly off-color or bargain cosmetics at Macy’s in the future.

It’s one thing to jump on the “fast beauty” train and quite another to discount for discount’s sake. Simply dropping prices in cosmetics is not the answer to anything long-term. It’s more like continuing the race to the bottom, isn’t it? Come on department stores, think about who your customer is and what they want. Then make it easy and convenient. Easy-peasy.

Shoppers who want reduced prices for what they buy will find it, perhaps online, maybe in a store — but somewhere. Going to the mall or large department store for that lower price in cosmetics doesn’t seem like a motivation that can be sustained. If discounted cosmetics brings someone into a store, there’s little to prod the person further in and up the escalator. Finally, with fewer employees in the store, the shopping experience (for cosmetics) won’t be as satisfactory as that in a Sephora, for example. I don’t see how this can be a successful initiative for mall anchors.

“The logical end to defensive warfare is surrender.” — Napoleon

The model needs to radically change. Discounting cosmetics to encourage shopping in other departments is a silly idea. You attract customers whose main interest is cost cutting. Hoping they will see something they did not intend to buy and then the retailer expects them to pay full price. What’s next?

Speaking as a former buyer of cosmetics (going back to 1980) and then as a merchandise manager with oversight of the category, the beauty business has been the last refuge of full-price selling in department stores. But the temptation to put these goods on sale has migrated from discount stores and mass merchants to those department stores — with the added impact of Sephora, Ulta and online sales. And like anything else related to price promotion, retailers will find it hard to stop taking this particular drug once they start. A long time ago, cosmetics fed off the traffic that the traditional department stores enjoyed. Then they became “headquarters” businesses in their own right given the strength of brands like Lauder, Clinique and Lancome. Eventually customers were trained to “wait for the gift-with-purchase,” just as they were trained to “wait for the sale” elsewhere in the store. Those legacy brands are aging, just like the legacy department stores that carry them. This pattern is being repeated throughout the retail industry and the entire CPG world.… Read more »
4
|
0
-   Share

Price is always a consideration, but also a slippery slope. Online retailing sets today’s prices. Omnichannel customers today are looking for seamless shopping across channels. The reason they go to stores is not for price — they value experiences in-store that they can’t get online.

The real question if you are a department store is not the pricing of cosmetics but the question of what makes Sephora successful.

Beauty may be in the eye of the beholder, however dropping prices or stocking lower-priced brands may be a short-lived tactic. My advice would be to invest in the experience and differentiation. Lower prices will lower expectations and may ultimately spiral in an unintended direction.

While easy to implement, discounting very quickly becomes a race to the bottom. Retailers and cosmetic brands should first focus on ensuring availability. Make absolutely certain that the entire product family is available to every shopper that walks across your threshold. Every shopper that doesn’t find their specific brand and shade in your store due to out-of-stock is another shopper lost — you don’t get another chance as she has already found another source.

The best way to keep customers is to ensure you have what they want; a simple rule yet apparently very difficult in practice. Cosmetic brands need to take control of their in-store merchandising experience and integrate technologies to ensure they have 100 percent accurate daily visibility of their entire at-shelf inventory and product set to minimize out-of-stocks! Save the discounts for rewarding existing, repeat customers.

To hit quarterly numbers, publicly-traded retailers are sometimes forced into pursuing tactics that boost sales in the short run without considering (or in denial of) the long-term impact on the business. This may be one of those tactics.

Discounting isn’t the answer — the customer experience is. Try makeup demonstrations in the store. Provide spa services. Install some interactive kiosks. Department stores can’t compete with drug stores by price, but they can take a page from Ulta’s and Sephora’s books and amp up the experience.

These discounts are likely to attract shoppers who come in to get the discount and then turn around and leave without shopping the rest of the store. Department stores need to be more creative and be considering more fundamental changes in order to reinvent their outdated experiences and revive their business model.

For department stores to be able to compete against retailers like Sephora, they need to be able to offer a similar shopping experience. Consumers aren’t attracted to Sephora because of prices, but because of the personalized and experienced customer service. Their loyalty program also helps retain customers as opposed to attracting one-time cost sensitive shoppers.

For department stores to compete, they need to offer the experienced customer support who will be able to increase the value of products sold.

Dropping the price of cosmetics will certainly drive more traffic to department stores; however, it is not a sustainable, long-term strategy. In China, there is already a generation of young shoppers who can live without physical storefronts because they can always find cheaper prices online. For many young female consumers, in-store cosmetics counters are simply places to test the products and verify their authenticity. Consumers who visit department stores are no longer just looking to buy things. On the contrary, they are searching for new tricks, new experiences, and opportunities to learn more.

Braintrust
"If discounted cosmetics brings someone into a store, there’s little to prod the person further in and up the escalator."

"For department stores to compete, they need to offer the experienced customer support who will be able to increase the value of products sold."

"I guess the question that one should ask is, is the price of cosmetics the reason we are losing traffic?"