Are donation requests at the checkout worth the shopper anxiety they cause? 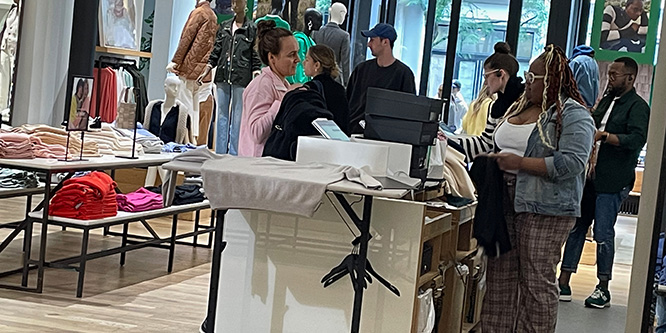 A new university study finds being asked to donate at cash registers heightens anxiety for shoppers, despite good intentions.

Interviews with 60 shoppers conducted by researchers led by Ohio University probing how they felt about being asked checkout solicitations found:

The study found such anxiety decreases during solicitation episodes when customers agree to donate, however, this occurs only when requests are made by frontline employees rather than self-checkout technologies.

Studies conducted in 2020 by Howard University found altruistic people may react negatively to point-of-sale solicitations because consumers see it as “a violation of their social contract with the retailer — a contract built on the principle of reciprocity, whereby the two parties equally contribute to and benefit from the exchange,” according to the Harvard Business Review.

Retailers could rebalance the exchange by strongly publicizing their commitment to the charity through in-store signage and by training associates as charity ambassadors, offering high customer service overall, and by making donations simple, such as rounding up a bill.

Efua Obeng, a professor at Howard University, told HBR. “Rather than haphazardly launching campaigns, retailers must strategically craft them to ensure success.”

DISCUSSION QUESTIONS: Do you see donation requests at checkout as more of a positive or negative to the in-store shopping experience? What suggestions would you have to reduce the anxiety some shoppers feel about being asked?

Please practice The RetailWire Golden Rule when submitting your comments.
Braintrust
"I think it's a form of friction but not necessarily a reason someone wouldn't come back. "

29 Comments on "Are donation requests at the checkout worth the shopper anxiety they cause?"

Even though the intention and causes are good, donation requests at checkouts are annoying. It’s a simple question that usually requires a yes or no answer, but it puts some consumers under pressure. It’s the same with any other kind of selling at registers – such as WHSmith’s constant attempts to flog discounted chocolate bars to people who don’t want them.

Overall I’d say donation requests are positive if they are done in the right way. As the survey results show, people have mixed feelings about donations at checkout. While I appreciate the retailers’ desire to support a cause that’s important to them, and to solicit their customers for support, this needs to be done in a low-pressure, light-touch way. The shopper should not be too inconvenienced by the request, and making the donation should be done very quickly. Slowing down checkout lines for any reason will not improve the shopper experience and it can hurt conversion rates. Retailers need to be careful about how they balance their philanthropic aspirations with their customers’ store experience.

I’m with Neil Saunders. Giving is good but this execution runs counter to the concept of a frictionless and speedy checkout. It can be annoying to the customer and certainly delays the process, even if only by seconds.

I’m all for making donations, but I see these donations as a negative interaction. I want to contribute, but I don’t know where the money is really going. What percentage goes to the retailer for administration of the program? Maybe educating the consumers about the program would work, but the way it is presented today doesn’t work for me.

Also, asking for donations during checkout is just bad timing. It slows down the line and turns the experience awkward in an instant. As the Howard University study found, customers already choose to do business with retailers who do good. Asking again at checkout implies that the shopper is not yet doing their share.

What is especially grating to me is the fact no one even bothers to speak to me when I am actually buying something in the store. But at the counter, when I’m ready to leave, I’m asked to be generous. There is no trust or relationship, and you’re asking me in front of strangers to give more. This is a training issue. You want to remove the anxiety and make customers feel good, it has to start when they walk in the door.

I understand the pressure of being asked to donate, it’s especially tough when every store you visit is collecting for the same charity. This tends to happen around the holidays.

The relentless checkout Q&A of “You can save 20 percent today if you get our store credit card.” “Do you have our loyalty card?” “This $5 coupon book will save you bundles later on…” and “We are collecting for ______ today.” is a lot. Sometimes you just want to pay and go.

Donation requests, if handled appropriately, should actually make the shopper feel better about the retailer. One locally owned grocer always asks about rounding up to the nearest dollar at checkout, with proceeds supporting causes like the Humane Society, Children’s Hospital and so forth. They avoid controversy and there is no shame in saying “no, thanks.”

I also feel skeptical about any study drawing conclusions from a survey base of 60 shoppers, but that’s a discussion for another day!

Taco Bell does this as well, with proceeds going to scholarships. I find it thoughtful as it keeps me from having to dig for change or stash coins somewhere afterward (probably reduces their cash-handling expenses as well.) Quickly done and never presented as an obligation – the Bell has a long relationship with education so I’m comfortable. Wendy’s should be doing this as well with the obvious Dave Thomas Foundation tie-in.

I thought this was terrific when it first started. I made several donations. Nothing huge, but I thought, “Hey, it’s for a good cause.” Now it has turned into a solicitation every single time I check out at the grocery store. Which is three to four times a week. C’mon.

I think it’s a form of friction but not necessarily a reason someone wouldn’t come back. The tech should develop and be more dynamic so that, for example, if someone says no to a donation request then they aren’t asked again for like a month and then the ask is reintroduced. This way it’s less invasive and less potentially annoying.

I agree with Neil. These “asks” at checkout are annoying and leave the shopper with the impression that everyone has their hand out. I came here to purchase some milk not to give to the chosen charity of [your supermarket name inserted here].

The U.S. is the most giving nation on the planet with regard to charitable donations. That said, I don’t like the checkout donation question. First, it disrupts the frictionless aspect of the consumer journey, and second, it’s too sterile, too generic. Donating is highly correlated to feelings, emotions, and passion about a cause. Many times consumers want to see/feel something in return like when they engage in a charitable event where both money and tangible work effort are a part of the experience. Unfortunately, the checkout question doesn’t provide any sense of this.

I don’t see yet more anxiety-inducing questions as the answer. There needs to be a short, clear blurb on what the charity actually does, with a statement that all proceeds go to the charity. The idea of training associates as ambassadors is unrealistic except possibly in boutique settings. As Bob pointed out, lavishing customers with attention after potentially impersonal or even automated exchanges up to that point would only exacerbate the annoyance.

Good point. Standing in a checkout line of four deep while being asked to support a charity you may have questions about doesn’t encourage happy giving. And if it’s a large well-known organization, sometimes customers would rather give to small non-profits for greater impact. It’s important for the retailer to provide education or advanced notice.

In the beginning I would say I found them positive, but then like so many initially good things — it got old fast. Part of it is that it seems ubiquitous and part of it is the lack of enthusiasm by checkout personnel. There is also a lack of in-store promotion. why did Retailer “A” chose to endorse Cause “B”? We don’t know. The best way to reduce the anxiety is to separate payment from contribution, maybe have a pick your charity kiosk or allow causes to solicit contributions in the same way that scouting organizations do.

While the sentiment is appreciated, the method is flawed. Aside from feeling “judgment anxiety,” there is the question of whether the money is actually going where indicated, if a handling fee is being taken off the top, and if the charity is using the money responsibly. And in grocery stores especially, if you return to shop frequently it’s incredibly annoying to be hit up every time you check out. Technology would be a better way to handle this, either through a loyalty app or QR code to allow people to confirm the charity, see how the money will be used and opt for a one time donation.

One of the uncomfortable issues not mentioned was the concern of being viewed negatively by other customers in line if the customer say no.

Businesses have been asking and supporting donations for years. The public has supported those efforts as well over many years. However today consumers have become a little resistant in giving. As one retailer told me, “it’s just our economy right now.”

These requests always strike me as self-serving (whether they are or not). Any time a marketer wants too much credit for doing good I also become skeptical. Companies should donate and give naturally and without imposing their goodness on customers. It gets stranger when the obligation is foisted onto the customer.

One of the best solutions for donation requests is tiptap. It takes the pressure off the staff and the customers too. Every now and then, technology actually works the way it’s supposed to.

People that want to donate are likely to already give regularly to their charity of choice. An “interruptive” donation request just becomes anxiety and guilt-inducing right when people are excited to get back into stores. Last week, I pretended to take a phone call outside of Walgreens so that I could avoid the “Sponsor a Child” pitch I received the week prior. :/ Yes, it’s for a good cause, but the methodology is uninviting.

Of course, donation requests at checkout are negative to the in-store shopping experience. And it reflects badly on the retailer. Surveys aside, common sense says such requests pressure shoppers, making them feel awkward, cheap and insensitive. Frankly, anyone who says otherwise on surveys is virtue signaling. Better to make such requests on the retailer’s website or via email requests.

Sorry but I find it 100% negative, with the issues ranging from purely technical (delaying the line) to equity (which cause(s) should be given exposure?) to the obvious (it’s inherently coercive). Those seeking a donation have plenty of opportunity elsewhere to solicit you. The suggestion is simple: they don’t belong there.

The best donation requests are the “would you like to round up your purchase to give to …” For customers who aren’t interested in carrying around change – which is a substantial number- this type of donation ask offers a credible value add and convenience in return for the donation.

Rushed donation requests at grocery checkout with only seconds to decide is lazy communication and execution.

One of the better customer-centric programs I experienced was an independent grocer providing valued tokens at check out, the next step to “vote” post-purchase by placing a token in a collector bin for one of the three charities. Backgrounder for each one is displayed at the bin. This program removes anxiety at checkout, and allows customers to have control over where they would like money to go rather than the retailer.

There are way too many causes and asks for consumers to make a thoughtful decision about giving (even to round-up) during the checkout process.