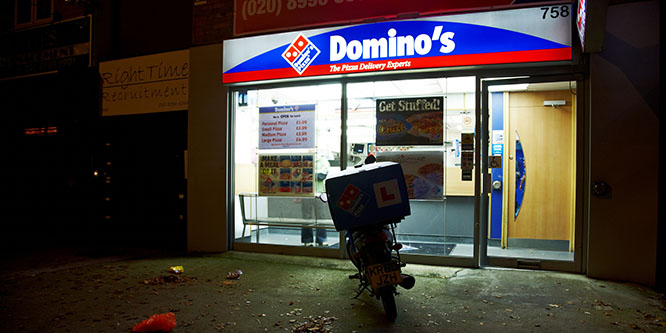 Domino’s received some ridicule for selling $30 pizzas to New Year’s Eve celebrants at Times Square, which blew up on social media because it came from Bill de Blasio, New York City’s mayor.

Responding to a New York Post article on Domino’s $30 pizzas, Mr. de Blasio tweeted, “Jacking up your prices on people trying to celebrate the holidays? Classy, @dominos.To the thousands who came to Times Square last night to ring in 2020, I’m sorry this corporate chain exploited you — stick it to them by patronizing one of our fantastic LOCAL pizzerias.”

Jacking up your prices on people trying to celebrate the holidays? Classy, @dominos.

To the thousands who came to Times Square last night to ring in 2020, I’m sorry this corporate chain exploited you — stick it to them by patronizing one of our fantastic LOCAL pizzerias. pic.twitter.com/rO6I9oYIku

The pies cost about double what a regular $14.49 large cheese pie costs at Domino’s.

Yet the responses to Mr. de Blasio’s tweet ran overwhelmingly negative. Many pointed out that Domino’s locations are locally-owned since they’re franchised. Referencing the article, a few noted that the particular Domino’s franchisee had been selling pizzas to New Year’s Eve revelers for 15 years and other local restaurants were copying the practice.

The inflated prices also weren’t seen as out of line. One response read, “When’s the last time the mayor went out for a pie in NYC? One will run you $30 on a good day, albeit it’s not Domino’s. The markup is not exactly highway robbery.”

Another read, “If the $30 was too expensive then nobody would have bought it. The market worked perfectly here, people who really wanted pizza got it despite the chaos of NYE in Times Square.”

The Post story also found those buying the pizzas didn’t mind the higher prices. They weren’t allowed to leave once they were in holding pens and many arrived early in the day. One partyer told the Post. “If he comes back, I will buy some more.”

Dynamic or surge pricing often occurs during emergency situations such as hurricanes and blackouts when demand exceeds supply and exorbitant price hikes are frequently criticized. Still, the public may be getting more comfortable with dynamic pricing with fares on Uber and Lyft linked to the supply and demand of vehicles and dynamic pricing occurring more frequently online.

DISCUSSION QUESTIONS: Was it appropriate or inappropriate for Domino’s to sell pizzas at inflated prices to New Year’s Eve celebrants at Times Square? Does the generally positive reaction indicate that consumers have become more open to dynamic or surge pricing?

Please practice The RetailWire Golden Rule when submitting your comments.
Braintrust
"This is no monopoly or cashing in on vulnerability. Completely misplaced outrage and rightfully called out."

"It’s called, “what the market will bear,” and if you’re drunk, freezing and standing around, 30 bucks is probably a gripe for about 5 minutes."

"Anyone who goes to New York City and decides that Domino’s is the right place to buy a pizza has obviously never been there before."

Context and place matters. You don’t get shocked at paying $6 for soda and $8 for popcorn in a movie theater, or 200 percent markups at theme park. The expectations are set. NYE at Times Square is even less restricting in terms of getting your own food. This is no monopoly or cashing in on vulnerability. Completely misplaced outrage and rightfully called out.

Is it appropriate or inappropriate for concession stands to gouge captive audiences at professional sports events?

It’s called supply and demand. If they’d have kept the pricing, they couldn’t have keep up with demand. Nothing here. Move on.

Dynamic pricing sits on a fine line between ethical and discriminatory. Pricing transparency will become more relevant for consumers as more retailers leverage the opportunity to increase margins; even just for a moment.

It’s interesting that the person responsible for overseeing a $90 billion budget has such a limited understanding of economics. Maybe the mayor skipped class the day they studied the price elasticity of demand? While I have different feelings about taking advantage of people in times of crisis, I have no concerns with a pizza franchise raising prices for people who eagerly volunteer to spend all day standing in the freezing cold just to see a little ball drop. For those people, I say caveat emptor – or try Ray’s!

I don’t support this type of pricing and most customers in my trade area don’t either — I was in Houston during a few hurricanes and I went out and did some price checks for standard items. I saw $27 for a 24-pack of water and gasoline at $15+/gallon. In a time of crisis (or need) people don’t need to be gouged. I realize that the Times Square price gouge is not a crisis, but I can tell you that Texas prosecuted or fined those retailers that did this to customers in a time of crisis.

Talk only gets you so far, states need to enact penalties for this type of extreme pricing. My 2 cents.

Good point, Richard. The hurricane situation is a big problem, and for those retailers who jacked their prices up on essentials like water, Karma will make sure they get their punishment in some way, as this is something people of good character should never do. The pizza incident is what it is, and you could always say no as there was no crisis to get a Domino’s pizza and if they were willing to pay, so be it. And the folks delivering these pizzas most likely were under duress just to get the job done, with the crazies in the crowd. By the way Mayor, you should be ashamed of yourself for not putting up some nice Porta Potties for these folks, as that is something essential they need — not the pizzas.

In short, no it didn’t. So long as it is open and transparent about pricing, Domino’s is entitled to charge what it wants for pizzas, and to flex prices if it needs to do so. If it is over-charging then consumers won’t use it. Frankly, I think there are far more important issues for Mr. de Blasio to focus on!

Anyone who goes to New York City and decides that Domino’s is the right place to buy a pizza has obviously never been there before.

Between 42nd Street and 57th Street and two blocks east and west there are probably over 100 pizza places that will deliver. This is NYC, why would anyone get a Domino’s pizza?

Unfortunately, this isn’t anything new. We pay more for an Uber during peak times, and we all know that a bottle of Advil that retails for $5.99 at home is going to cost at least $15 in a hotel gift shop.

Speaking of hotel gift shops, surge pricing is the latest way to increase revenue in Las Vegas casino shops. In 2019 some MGM properties stopped marking items because the price changes when consumer demand is highest. If you want to know how much something costs, you have to ask a store associate. Is it legal? Sure, but it’s not always ethical.

It’s definitely not a crisis, and it is supply and demand, sort of, but it’s also taking advantage of people who are in holding pens for many hours, waiting for the ball to drop, without even bathroom access. Sure, we know there are lots of better pizza options in NYC than Domino’s, but lots of these folks were presumably first-time tourists with little to no city knowledge and they were in holding pens without any options. A better option would be for Domino’s corporate to offer free pizza to these tourists as a PR/goodwill gesture.

The mayor needs a dose of reality. If this was done in the middle of a hurricane, flood, ravaging fire…then he’d have a point. But it was New Year’s Eve in New York City for Pete’s sake! This is a city where, on the most nothing of days, a simple sandwich costs more than feeding a family of four in most other places. The added costs of overtime pay, pizza production, delivery challenges, etc. easily justifies the increased cost.

When you have a captive audience that is limited to no other options, price gouging is a far more common occurrence. It’s completely acceptable at sporting events, concerts and Broadway shows, and Domino’s did what all other companies do when there is a lack of supply and increased demand. This is a non-story.

Then there was the year Olive Garden in Times Square was selling New Years Eve dinners for a mere $400 a head. Seems fair (hah!).

I totally agree with Bob Phibbs that this is entirely about supply and demand. It’s called capitalism and that is what has made the U.S. the most envied economy in the world. The Domino’s stores selling the pizzas are independent franchisees and employ local residents, so de Blasio is once again highlighting his limitless ignorance to the fabric of the city he was elected to manage.

It’s called, “what the market will bear,” and if you’re drunk, freezing and standing around, 30 bucks is probably a gripe for about 5 minutes. The airlines, by the way, are masters at this technique.

Apparently this is, as Edith Wharton once called it, the “custom of the country” so appropriate (that is, there are probably towns or even other situations in NYC where it would not be). Unanswered, of course, is whether or not a business could gain goodwill by NOT raising or even lowering prices for the occasion. I suspect few would.

Domino’s in NYC? The best pizza in the world is just about anywhere in the city. Domino’s was definitely wrong to gouge the new year’s crowd. The amount of bad press here is staggering. How could a chain be so tone deaf?

Perhaps a better idea would have been free pizza to gain some loyalty. Heads should roll!

The door swings both ways. As others have pointed out, elasticity of demand can mean cheaper prices for consumers as well.

Who’s to say the rational price for pizza isn’t $30, and $15 is a steep discount? Well, the buyer says so. Amazon tests prices million of times per day depending on demand, sometimes even after an item is added to the cart. Even Walmart has changed its EDLP mantra to contend with Amazon. And don’t be surprised if the price on a mobile device is less than the price at the counter.

Uniform national pricing began to wane in the 1970s. We’ve only gotten more consumer-friendly since then.

It was appropriate considering the context of the event and time. The best way to tell if it is exploitation is to ask the customers. Each of the customers in the article was very happy with their pizza since they were destined to be in the street locked in for the NYE celebration for eight to 12 hours. Unfortunately I think that this was news outlets and celebrities that were not there trying to create buzz for themselves with this non-news event.

Braintrust
"This is no monopoly or cashing in on vulnerability. Completely misplaced outrage and rightfully called out."

"It’s called, “what the market will bear,” and if you’re drunk, freezing and standing around, 30 bucks is probably a gripe for about 5 minutes."

"Anyone who goes to New York City and decides that Domino’s is the right place to buy a pizza has obviously never been there before."