Do Kroger’s chains have more to gain or lose from closing stores over ‘hero’ pay increases? 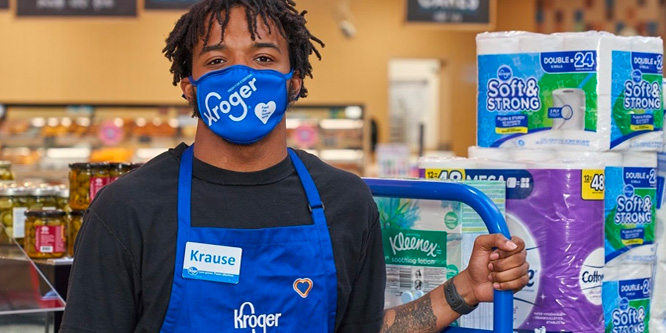 It’s safe to say that no retailer feeling forced to pay its workers $4 or $5 an hour more as a result of a local ordinance is happy with the situation. All have groused, but most have chosen to pay the temporary increases knowing that they can either bite the bullet in the short term or make adjustments, such as raising prices.

Trader Joe’s took a different approach with an announcement last month that it would temporarily raise the pay of workers nationally. The chain, which operates more than 500 stores across the U.S., bumped up its hazard pay for associates by $4 an hour. To pay for the increase in wages, Trader Joe’s chose to cancel the midyear bonus it pays its roughly 10,000 workers.

Kroger’s approach has been notably different. In a number of cases, management decided to close underperforming stores in markets where the grocery giant is faced with having to extend hazard pay to its frontline hourly associates.

Kroger’s move to close the two Ralphs and one Food 4 Less location in Los Angeles follow its decision to close two others in Long Beach — a Ralphs and a Food 4 Less — after the municipality passed an ordinance requiring Kroger and other retailers to pay $4 an hour to frontline associates for 120 days.

Kroger has criticized hero ordinances as being imbalanced because some retailers are forced to pay workers more money while other employers are exempt. The retailer pointed out that, while it is being required to pay more to its workers, Long Beach was not doing the same for its municipal employees who are in public facing positions.

The Long Beach law applies to stores with 15 or more employees run by companies that employ more than 300 nationwide.

Kroger recently reported that its 2020 same-store sales (excluding fuel) were up 14.1 percent with digital revenues jumping 116 percent. The grocery retailer announced an operating profit of $2.8 billion.

DISCUSSION QUESTIONS: Should chain retailers look at temporary pay mandates as more of a branding challenge vs. as a financial issue? How do retailers that frequently publicize the investments they make in communities not see similar opportunities when it comes to underperforming stores?

Please practice The RetailWire Golden Rule when submitting your comments.
Braintrust
"Kroger may have a valid business reason for the closings, but the negative optics outweigh the financial upside."

"I cannot help wondering whether Kroger’s decisions were made to cement a precedent for future negotiations or if they were merely opportunistic."

"Sorry, this is a naked attempt by the grocery union to embarrass the chains."

34 Comments on "Do Kroger’s chains have more to gain or lose from closing stores over ‘hero’ pay increases?"

Given that the stores were already underperforming it sounds like the hero pay ordinance may have brought forward a decision to close them rather than initiated it – especially if hero pay pushed them into the red. Shutting a store has consequences and it is not always a good look, however Kroger needs to stay on top of its store fleet and ensure that it is constantly trimming unproductive locations. Over time, the failure to do this creates a sclerotic and flabby company. As for the hero pay, I am sure it is well intended but it is wrong for local councils to intervene in the market in such an arbitrary and haphazard way: and now people have lost their jobs because of it, which is far from a great outcome.

Underperforming or not, I can’t think of a worse time to close a store with regard to customer perception. Here is Kroger’s message, loud and clear, “Our workers don’t deserve more money for 120 days for their service to you.”

If the stores are underperforming, suck it up and wait until the 120 days have passed then make the business decision.

I quite agree that it looks bad. However much of the blame needs to be assigned to local councils, which should not be setting wages. Especially so when the mandate is discriminatory and doesn’t apply to other stores like Walmart or Target. Interference has consequences and this is one of them. Kroger is not a charity there to clean up or mask a government created mess so, as bad as it looks, I can’t blame them for shutting stores that no longer work for them.

I agree with you Neil, but I also see brick-and-mortar stores as a form of marketing that needs to be managed like any other channel. They should have figured out their PR play before closing to better manage the optics, even though you are right that they are a business, not a charity.

Absolutely, Neil, I too think it is totally inappropriate for local councils to be cherry picking who pays more and who does not.

I agree that retailers need to close underperforming stores or they risk their financial futures. The question is, what pushes a retailer over the edge to close an underperforming store? If a local ordinance makes an already underperforming store even more unprofitable, then it seems to qualify as a logical tipping point. Kroger will take a bad PR hit in this particular local market, however so will the local government among local businesses. Retailers open and close all the time. In a few months it will likely be forgotten.

I’m all for rewarding front-line workers for their heroic work, but this needs to be at the discretion of the company, not government. And while there may be some positive publicity as a consequence of providing additional pay, it shouldn’t be the primary motivation – it should be about the workers. The government mandated pay proposed in California is a very slippery and dangerous slope.

It just creates bad optics for Kroger – it makes them appear unsympathetic and uncaring to the situation of their front-line workers. They should have looked at other options rather than closing one million+ facilities and causing customers to look elsewhere to shop.

This may well be an example of “the straw that broke the camel’s back” for already underperforming stores. Retailers do not have a moral commitment to operate stores that are losing money because customer are not buying enough to keep the stores open. If there is no way to balance a temporary increase in hourly rates (such as canceling bonuses), retailers may have no choice but to close those stores.

This is way worse than bad optics or bad timing. It’s deeply flawed management thinking and behavior. I have read so many positive things about Kroger’s business practices. This leaves me scratching my head.

Sorry, this is a naked attempt by the grocery union to embarrass the chains. I quote union president John Grant, “Faced with sharing their windfall with their employees, [Kroger] chose instead to destroy 250 families’ lives in the middle of a pandemic.” I have family members who have been part of unions for years but this is just wrong; it is wrong to use the front-line workers as pawns. Kroger either gives into this and fights it forever, or they hold the line with their business model and battle the press. In the end the customer and employee loses.

Kroger is going to face some big blow-back on this over time. They can say whatever they want and try to point figures at local governments, but at the end of the day when Kroger posts huge sales and earnings gains there will be questions and bad public relations. I get these stores may be in “soft markets” for Kroger, but since when does Kroger just give up, pack up and go home? Someone should ask Kroger their position on raising the national minimum wage.

This is a slippery slope that’s only going to get deeper and faster. With additional municipalities introducing “hazardous duty” bonuses, the pressure on all retailers will increase. However if perception is reality, the timing is not good.

How perplexing and aggravating. Clearly, Kroger leaders didn’t think to talk to customers before doing this. Customers see up close and personal how hard these associates are working, and they are talking with them at each visit. Does Kroger really want to take a reputation hit like this?

Why aren’t Target, Walmart or Amazon targeted? It is perplexing and aggravating to cherry pick who the union decided to make the enemy in a battle for eyeballs.

Kroger shot itself in the foot with this move. The general public empathizes with the front-line folks, and also knows that supermarkets have all seen record sales in 2020, due in part to those frontline workers. Kroger may have a valid business reason for the closings, but the negative optics outweigh the financial upside.

Record sales have not been driven by frontline workers. According to an extensive survey of UK shoppers, of those who said they were spending more, 39 percent said it was because they were having to buy more expensive brands or types of products due to the lack of choice. Some 32 percent said they had to splash out more on groceries due to not eating out anymore whilst 29 percent said it was due to a lack of multi-buy promotions, which were stopped by many supermarkets at the start of the outbreak to help manage stock levels. Another 31 percent said they were consuming more in general after finding themselves comfort eating whilst 13 percent admitted treating themselves to pricier brands or product types which is likely due to some households having more disposable income. Another 26 percent said their increased bills were due to shopping in pricier convenience or independent stores since the lockdown began, perhaps as they were looking to travel to nearby shops instead of large supermarkets. Others have been stockpiling with… Read more »
0
|
0
-   Share

I am with Trader Joe’s on this one. The message is clear, “We care about our workers who service you and therefore we care about you.”

Too often companies look at labor as a cost. It must be approached as an investment and it generates ROI just like any other asset.

That the specific actions Kroger is reacting to were discriminatory in their treatment of large/national versus small/local retailers is well established. So the current question is “who gets to decide what workers will be paid?” At the geographic level (i.e. blanket minimum wage laws for all workers and industries) that right has been granted to government. That leaves companies with simple decisions — do business there or don’t. Kroger doesn’t deserve criticism for exercising the only choice they are still able to make under any circumstances. But it is particularly odorous to do so in such a clear case of blatant discrimination. The issue for all retailers here is not public opinion, it is legal precedent.

Oh boy! Legislating what the big boys pay to their employees at the local level scares the heck out of me. And it apparently is an action that has instigated large changes to Kroger’s market presence. Did the cities up their staff’s income where staff must interact with the public? What other retailers will the cities go after? Surely there have to be more.

Bad move, bad statement. If Neil is right and the stores were underperforming anyway, this was the wrong excuse.

I’m sure Walmart is laughing because they didn’t have this foisted on them.

No retailer wants to operate stores that are unprofitable. Kroger had identified these locations as underperforming. That term covers a wide range of results. It may be that the locations’ profitability was marginal and on a downward trend. Are the optics good? No, but the issue with this type of proclamation is that this one for 120 days may be followed by another.