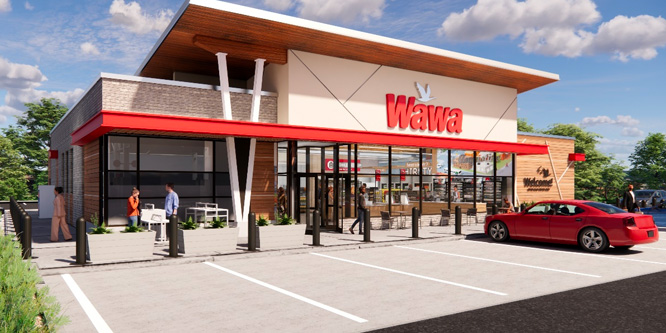 The devotion that Wawa’s customers feel for the convenience store chain has been described as cult-like, and that has inspired the business to follow its devotees into an expanding list of geographical markets.

Wawa yesterday said that it plans to launch its first stores in Indiana, Kentucky and Ohio. These locations will be in addition to its previously announced plans to move into Tennessee where it sees the opportunity to open up to 40 stores.

The store openings in the four states are part of Wawa’s strategy to move into markets where it won’t get ahead of its supply chain. Wawa is looking to open stores beginning in 2025. It said it would reveal the number of locations it plans to operate at some point in 2023.

“We have received thousands of requests over the years to spread our wings further west,” John Poplawski, vice president of real estate for Wawa, said in a statement.

“Growth means strengthening our existing markets as well as expanding to both adjacent and new markets so we can reach new friends and neighbors and welcome them as part of our extended family,” said Chris Gheysens, Wawa president and CEO. “These markets are the perfect places for Wawa to expand based on their strong business communities, their family-like atmosphere, and the confidence that our unique offer and amazing associates will be welcomed by these communities.”

Wawa is continuing to open new locations in its existing markets. The convenience store retailer in April said it was looking to expand its physical presence in the Florida Panhandle along with adjacent markets in South Alabama. It is actively scouting potential sites for new stores in Pensacola, Panama City and Tallahassee in Florida. It is doing the same in Mobile, AL. Wawa expects to open 40 new stores in these areas, with the first making its debut in 2024.

The convenience store chain opened its first Florida store in 2012 and expects to have 250 in operation across the state by the end of the year.

DISCUSSION QUESTIONS: What makes Wawa special in the eyes of its customers and how does it ensure that it carries that uniqueness into new territories? How do you expect Wawa to fare in markets like Indiana where a strong convenience operator with local ties — Casey’s General Store — is already present?

Please practice The RetailWire Golden Rule when submitting your comments.
Braintrust
"Their differentiation is strong enough that they will do well in any market they choose to move into."

"Wawa’s street presence is strong enough that it will induce trial in any market it enters."

"Oh, and the biggest winner in the Wawa expansion rush? Tastykake."

15 Comments on "How far will Wawa follow its followers?"

The customer experience at Wawa is fantastic. Their attention to detail, excellent sandwiches, great coffee, and legendary lemonade, coupled with lighting fast service, differentiate them from other companies in this space. Their differentiation is strong enough that they will do well in any market they choose to move into.

I am a West-coaster with no meaningful experience with Wawa, but I do know their customers are extremely devoted. I think the “growth by concentric circles” strategy gives Wawa every opportunity to expand their reach while leveraging that deep loyalty. I admire and respect this cautious and thoughtful growth strategy, even if it means it will be a long time until California becomes an adjacent market!

If you’ve ever been in a Wawa, you’ll remember it. From the fantastic coffee to the pastries to fresh sandwiches and to some of the cleanest locations and friendliest store associates you’ll ever meet, Wawa continues to reinforce what a fantastic experience feels and looks like. Regardless of the market or competitor Wawa faces (Casey’s, Sheetz, 7-Eleven, etc.), they’ll perform at a high level and be extremely successful.

Convenience is very much location driven. Smart retail real estate teams can ensure that Wawa will be successful in their launches. The cult-like loyalty follows continued, reliable service. Wawa sports a great coffee selection, has clean stores and many food items. Their mobile app supports the store and they quickly build seasonal specials into their store atmosphere. Competition in the c-store space is high across the board but c-stores have the highest number of stores and lowest initial store setup costs (usually) by sub-vertical in retail with smaller store footprints, reducing launch risk with plenty of consumer demand. The new locations also are in lower-cost real estate markets. Competition is stiff, but Wawa can thrive.

From what I know and hear from their customers, they don’t have to do much to expand their business and customer loyalty. I have never been to a Wawa store, but recommendations and comments from their many tribe members have me hoping that Chicagoland is on their map. If I am not a lone fan in the Midwest, it sounds like an easy slide into our marketplace. I, for one, am waiting. I think they will be a very strong competitor.

Wawa has been part of the retail landscape here in Northeast New Jersey for only a few years, but they seem to have been around for decades. That’s part of their secret charm and it will be the same as they move west. Casey’s is a great operator and because of that they may not lose share when Wawa comes to the neighborhood, but someone will.

Oh, and the biggest winner in the Wawa expansion rush? Tastykake.

I would have been happy to find a Wawa in western Pennsylvania during a recent drive, because their reputation for great execution (and food, and coffee) has traveled far and wide. They should be successful in their new markets, provided that they have a strong strategy to acquire great sites.

One parallel to the Wawa phenomenon — on a smaller scale — is Kwik Trip, based here in Wisconsin. Being privately held seems to add to both companies’ cultures of great execution and great food/coffee selections. (And clean bathrooms matter too!)

I was just about to bring up Kwik Trip — they have taken share from Speedway (former SuperAmerica that has no local charm anymore) and Holiday (now owned by Couche-Tard and clearly becoming just another Circle K). Not just the private holding, but the hyper-local focus on F&B and services, and ubiquitous branding and siting, will keep this chain intact. Wawa and Sheetz may hit a Midwest Wall; it’s just a question of on which side of Chicago that wall stands…

My limited experience with Wawa on road trips has been as advertised. I think from a real estate perspective finding the right location that has a consumer demographic with high expectations for the retail experience, but whose current options are under-delivering, will be key. If Wawa doesn’t get ahead of itself with expanding too rapidly (which it seems like they are keeping in check) and keeps its standards up, they will find success.

Wawa is the Chick-fil-A of convenience stores. Great service from people with great attitudes mixed with great product. Just look at the online reviews mentioning the quality and great taste of their coffee and food. And they are always clean. I’d love one near me!

The other question is how Wawa will fare in markets with other stores that have strong ties to the community, like Casey’s General Store. I wouldn’t build next door or across the street from a Casey’s, but if there is an under served location, why not? Wawa’s reputation is strong and it won’t take much time for it to become a part of that location’s community.

Wawa’s street presence is strong enough that it will induce trial in any market it enters. In many cases, when it enters a market it repositions the competition from be a destination to being just another c-store. The term “My Wawa” quickly becomes part of the local language.

Wawa makes the best tuna sub sandwich. Please come to Chicago! Other than Thornton’s, there isn’t a chain that provides the type of welcoming, clean, high quality food options.

George’s story is rather vague on the “level of success it has achieved in Florida,” other than to imply that because it has 250 stores it must be doing well. I’ll take the middle road here, so to speak: I think it will be successful, but not as successful as it is in its home territory. Cult status is hard to maintain outside the original disciples, and while there are national standouts — like Trader Joe’s — that have made the leap, there are plenty of others which, for whatever reason(s), have stayed regional. And though I’m not intimate with the details — “Bible Belt c-stores” is one Jeopardy category I missed — I would have to think there are entrenched local versions they’ll be competing against.

Wawa has it dialed in and will do well in new markets, regardless of where. Any time a retail brand commits to their core, takes the extra time to plan backward from the customers view, how they sees and feel the experience, from products and service, to the small touches, they win. Differentiation matters for growth.

Braintrust
"Their differentiation is strong enough that they will do well in any market they choose to move into."

"Wawa’s street presence is strong enough that it will induce trial in any market it enters."

"Oh, and the biggest winner in the Wawa expansion rush? Tastykake."