Is tipping out of control? 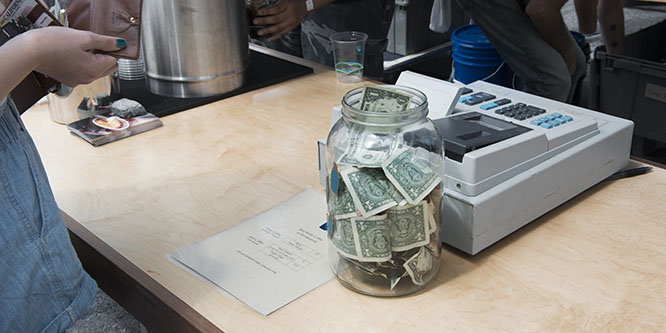 Consumers were eager to tip in the early stages of the pandemic to support local establishments, but tipping fatigue has reportedly set in.

Newer POS technology that encourages tipping is particularly making tip requests more pervasive. Payment through touch-screen tablets often offers tip options of 15, 20 or 25 percent – or “no tip.” Similar tipping options are offered when paying through mobile apps. In some cases, the minimum tip on mobile POS starts at 25 percent.

The screen query adds “more anxiety and social pressure into the tipping decision,” according to a New York Times article exploring tipping fatigue, versus the old-fashion tip jar.

This development is not simply a result of the pandemic. A 2018 article from Today was already wondering whether mobile payment systems were “guilting customers into paying those gratuities.”

Whether tipping is necessary for takeout is also a widely debated topic on social media. Critics note that most workers are at least making minimum wage and wonder if it’s fair to low-wage workers in other industries. Around delivery, confusing surcharges for service fees that are separate from optional tips to delivery personal are also feeding tipping fatigue.

The Wall Street Journal reports on recent data from Square that suggests that inflation and the “return to normal” are leading people to be less generous in tipping, particularly at establishments where there is no waiter or waitress service.

In a penned article for New York Magazine in response to a Times’ article on tipping fatigue, Ashley Wells, co-owner at Los Angeles restaurant All Time, said she recently instituted a 20 percent gratuity on takeout orders because takeout requires more staff and “more complex logistics” than dine-in and she has to support her staff.

DISCUSSION QUESTIONS: Has tipping become excessive and/or confusing? What’s your feelings on tipping for take-out, tipping food establishments where wait staff is earning a full wage and tipping in addition to delivery surcharges?

Please practice The RetailWire Golden Rule when submitting your comments.
Braintrust
"Tipping has always been one part appreciation and four parts psychology. Mostly guilt. The ethics discussion should really be part of every POS implementation project. "

"...as we move to a more cashless society, the old-school tip jar may be emptier than usual."

13 Comments on "Is tipping out of control?"

The challenge with tipping these days is that we now face a decision we didn’t have to concern ourselves with as the POS systems force customers down this path. Takeout, convenience stores, and other retail experiences where customers didn’t have to provide a tip create a somewhat awkward customer journey with unnecessary friction.

While customers may welcome the advanced innovations that touchless commerce, Apple Pay, and Android Pay offer, the closing of the transaction seems to always end with the 15-20-25% tip for a service that was never really substantial enough to warrant a tip. However as we move to a more cashless society, the old-school tip jar may be emptier than usual.

The appropriate model here enables the customers via the POS journey to opt-in for a tip for a good customer experience. The default tipping POS model only creates more confusion and friction.

Tipping is a relative experience. It can be based on local mores, on the quality of the service, on a person’s frugality, and on the mood of the patron that day. Many who have waited tables in an earlier life feel for the servers and tip above the generally-accepted (in the U.S.) 15 percent of the total, while 20 percent of the total that includes taxes is probably excessive. The fact is that 20 percent is easier for most patrons to calculate without resorting to a calculator and so, we over-tip.

Tips are discretionary and the customer should always be given a choice of the amount they wish to give, including on POS. Anything else is assumptive and, in my book, that is rude. If I were faced with an option of 25 percent or more only on a POS I would give nothing via the machine and perhaps tip in cash instead.

You are much nicer than I am in these situations, Neil. When I’ve run into the 25 percent and no option POS I pass, but I will also tell a manager why I’m passing. And adding a gratuity without telling me up front would guarantee no tip and likely no return business. If Ms. Wells in LA wants to up her prices to reward her staff for takeout orders, that’s fine – but to tell me I have to tip 20 percent is a no-go. And my son works in a restaurant where he is tipped only on to-go orders, so I’m sensitive to that.

I believe tipping for service is appropriate, but tipping options on mobile payment systems are getting obnoxious. I can easily calculate the tip/service equation in my head without a RSST (Restaurant Suggested Server Tip). Perhaps we should move to the European model and pay servers a living wage with no tip, or a fairly standard minimal tip in some places.

After all, tipping has always been one part appreciation and four parts psychology. Mostly guilt. The ethics discussion should really be part of every POS implementation project. There seems to be no end to the tricks of the trade like figuring the tip on the tax-included number and now adding a 22 percent option to push the 20 percent one to the coveted middle choice position. A 25 percent tip built into the system? Fuggedaboudit.

I have no problem with tipping. I do have an issue with “assumed” tipping. For me, it depends upon quality of service (that could be a smile and hello), but expected tipping for run-of-the-mill experiences, not so much. And that applies to literally any environment where there is an opportunity for tipping.

It absolutely is. I really don’t like buying a cup of coffee at a counter and being prompted to pay 15, 17, or 20 percent. And then having to dig through the prompts to find 0 percent. Tipping is supposed to be discretionary. New app based POS systems are bypassing that idea. As a customer, I’m not so fond of explaining that there’s a difference between a waitperson bringing me what I want, making recommendations, inquiring about my satisfaction, and working to ensure my overall satisfaction during a meal, and walking up to a coffee urn with a cup and filling it. Just sayin’.

Make it stop. Seriously, stop. No cans, tip jars, bowls with signs that say “college fund.” I honestly don’t think this tipping trend just started. I can’t park a car, carry a bag, or even buy a coffee without looking for singles or coins to add to some guilt vessel. It is up to employers to pay their employees the right wages for their business model that allow for them to retain strong talent. Doing your job should not be tip-able. We have lowered the service bar to not spitting in our food but tips should be rewards for above and beyond service. These new POS systems might as well just add $5 to your bill and divvy-up the receipts to all of the staff at the end of the day. Between the “round up for charity” and add a tip option to the check out terminal, the tipping trend is not about fatigue, it is about disgust.

I was in a fast food restaurant the other day and the tipping options STARTED with 15%. There ought to be an industry-wide discussion.

Similarly, I was at a coffee place and the options started at 15% … for giving me a cup of coffee that I must pay for already. The result was 0%. Tipping is not automatic … it is for real service.

The key here is understanding which service positions mandate tipping. I am always reminded that TIPS stands for To Insure Prompt/Professional Service. With the exception of large dining reservations (8 or more) which often include a tip (usually 20%), I am not in favor of mandated or suggested tips. However, growing up as a first mate on a fishing boat, I learned to appreciate the value of tips and tend to tip heavy. My wife reminds me that “real men tip big.” Whether fully deserved or not, most of the folks affected by tips could use the extra $$$ more than most tippers.

Miss Manners says, if I may be so presumptuous as to borrow from (and perhaps misquote) her, that people should be decently paid and tipping should be voluntary … and rare.

The real world has never quite lived up to that, at least here in the U.S. but I think there was a basic understanding that tipping was expected in certain areas — valets, full service restaurants, etc, or to people who rendered extraordinary service, regardless of where they were. The key word here is extraordinary service. So yes, it seems to have strayed from the norms … at least the old ones.

Braintrust
"Tipping has always been one part appreciation and four parts psychology. Mostly guilt. The ethics discussion should really be part of every POS implementation project. "

"...as we move to a more cashless society, the old-school tip jar may be emptier than usual."