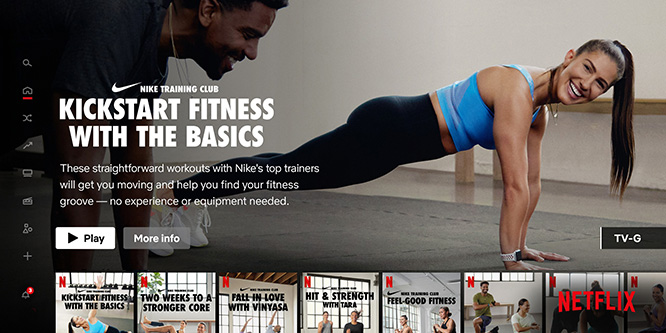 Those Netflix subscribers with a New Year’s resolution to get in shape can now pursue their fitness goals using exclusive content from one of the biggest names in athletics.

Nike has partnered with Netflix on an initiative called the Nike Training Club, which consists of an initial 46 videos of exercise content that are now available on the streaming platform, according to Deadline. The entire series will feature 30 hours of “motivating exercise sessions” and is available in multiple languages.

RetailWire confirmed that the Nike Training Club content on Netflix is broken out into segments with titles like “10 Minute Workouts,” “20 Minute Workouts,” “Bodyweight Burn” and “High Intensity Training,” each of which contain multiple short episodes. The series offers an array of different types of guided exercise, such as cardio and yoga.

The branding of Nike’s new Netflix series is not only consistent with, but overlaps that of its own apps. The brand has a mobile app named Nike Training Club, also known as NTC+, which offers health related content, tools for setting health goals and advice from wellness experts.

The partnership comes as Nike has been touting its “culture of innovation” as key to its continued growth, Consumer Goods reported. Nike has focused both on selling products and building customer loyalty via its popular mobile apps. The company does not appear to be going it all alone, however, as it has also discussed the value of its partnerships with such retailers as DSG, JD Sports, Zalanado and Topsports as part of its recent successes.

Other recent news about Nike and its plans for partners, at least in terms of the sales channel, have painted a slightly different picture. Over the past four years the brand has cut down on its number of wholesale partners by 50 percent.

The launch of Nike Training Club on Netflix also comes as speculation continues about Netflix’s plans to expand the types of content it offers.

Last May, Netflix told The Verge that the company was working on a livestreaming feature for stand-up comedy specials and other live content. Such a move could make Netflix more competitive with Disney Plus.

DISCUSSION QUESTIONS: What value will Nike derive from its content relationship with Netflix? Do you see other brands develop similar relationships with streaming services in an effort to better deliver content through their own apps and ecosystems?

Please practice The RetailWire Golden Rule when submitting your comments.
Braintrust
"Nike will reach new consumers and fuel growth by bringing the gym to our homes."

"Another great way to drive loyalty while providing accessibility to a great workout."

"It is a brilliant move. When you have the resources and the brand likability plus a partner with the reach of Netflix – perfect match!"

I absolutely love this collaboration with Nike and Netflix. It checks so many boxes for cross-brand alignment, customer engagement, going where customers gather (virtually), etc. The only way to make it better is to livestream classes in real time, which sounds like it could eventually be an option.

Nike will strengthen the loyalty of its customers with this added service (especially if it’s free) and hopefully drive them to do everything Nike.

Nike will reach new consumers and fuel growth by bringing the gym to our homes. More brands will work with streaming services to deepen engagement among their desired audiences.

This is brilliant, but especially for Nike. The accessibility of Netflix as a workout platform will bring new users to the training app/loyalty program. Additionally, as Netflix minimizes the number of people on an account, this is a new incentive for people previously on someone else’s to subscribe.

Curious to see their customer marketing approach to get subscribers to try it out. As a consumer, it sounds efficient for sure that I could access quality home workouts from something I already pay for, but the conditioning has been “Netflix and chill” for so long. Netflix will have to change that consumer association with its product, which is an interesting challenge.

This is great partnership and extends Nike’s method of athletic inspiration beyond just its shoes and apparel. It gets to the heart of fitness and overall health improvement. With Netflix’s 2022 subscriber count at roughly 223 million, think about the good that Nike can deliver to its aspiring athletes who are looking for anything from quick five minute hotel workouts to 60 minute intense cardio/weightlifting programs. Really cool stuff.

It is a brilliant move. When you have the resources and the brand likability plus a partner with the reach of Netflix – perfect match!

Nike is beaming themselves into the home gym through one of the most powerful channels into the home. And they are doing it without having to go into the hardware business. Which they can still do, but in the meantime, this is brilliant.

Partnerships are the key to winning the hearts and minds of brand lovers. You can’t have a more sound strategic alignment than Nike with Netflix. The Nike lover with the Netflix home subscription creates a synergy that supports direct-to-consumer sales and provides value-add content to support retention strategies.

As someone who has exercised for over 50 years, I still find motivation difficult. During the pandemic, there was a multitude of exercise videos of every flavor. I tried this and that and quickly quit. When I talked to others who attempted video-led exercising, most have quit — but that is all exercising.

I don’t believe there is any downside to Nike’s effort. Others are already in this space, and more will join. However I question how much value it will create.

As predicted, Netflix was just getting started in strategic partnerships when it hooked up with Walmart. The cool thing about Netflix is that it can move in many directions (content, product, proprietary content), allowing the platform to differentiate its partnerships. Nice move!

Both Nike and Netflix are winners with this collaboration. Nike wins by being able to offer its workouts and products into people’s homes without the cost of creating its own platform. Netflix wins by securing content they didn’t have to create. Both win by the revenue this will generate for them.

Great points Steve! It is an excellent example of win-win partner collaboration. Netflix has been challenged to keep its customers loyal and adding new content and features should help with retention. And for Nike, creating more brand loyalty by engaging with them virtually will help as they pare down their wholesale business.

Like the other panelists, I love this idea. There seems to be no downside for either party. I see this as an opportunity for Netflix to create channels and begin to tier content more and charge accordingly. Potentially Netflix-Nike can test some more creative things; interactive commerce, connected fitness — figuring out where else Netflix can go.

While YouTube content is abundant, it does seem to make sense for brands to partner with streaming services in order to grow their audiences. I love watching Teton Gravity, Patagonia, and TNF content on their YouTube channels but would equally enjoy just searching it up in Netflix/Apple+, etc.

Lots of fun things to explore when smart brands/businesses get together.

Great thinking! What a powerful way to keep the Nike name in front of millions of eyeballs, offering a value-added content experience (workout videos), and aligned with another HUGE brand. If I worked for a competing sports company, I might be thinking, “Why didn’t we think of this?”

Nike has always been on the cutting edge of innovation and this latest initiative is no different. Consumers will absolutely engage with this content and Nike will now be top of mind every time people interact with the streaming classes. They don’t mention Nike including ads for their products, but there will likely be product placement and suggestions for enhancing your workout using their products. Another great way to drive loyalty while providing accessibility to a great workout.

Nike Training club has been around for a long time. There is an app for it, so Nike already has content with distribution. Stating the obvious, putting this content on Netflix increases distribution and eyeballs for Nike. The streaming services are going to continue to look like the network models of old, with the exception of you need to pay for the internet access as opposed to (going to the way way back machine now) over the air access.

So yes, I see this continuing to happen. It would be interesting to know the economics of the relationship and how one would forecast the value of it. My guess is the number of new Netflix subscribers signing up because of the Nike content would be a number between 0 and 1, since it has already been available. Perhaps with the addition of workout videos and games in addition to movies and shows makes Netflix a bigger “player” in the “tech household hub” that people have been bloviating about for years.

Braintrust
"Nike will reach new consumers and fuel growth by bringing the gym to our homes."

"Another great way to drive loyalty while providing accessibility to a great workout."

"It is a brilliant move. When you have the resources and the brand likability plus a partner with the reach of Netflix – perfect match!"