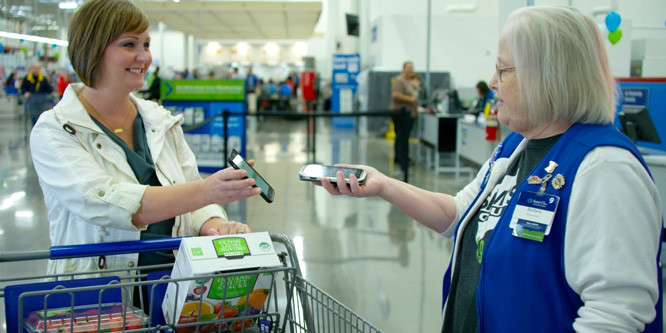 Jamie Iannone, CEO of SamsClub.com and executive vice president membership and technology, writing on a company blog said the new club in the Lower Greenville neighborhood of Dallas, TX is intended to help Sam’s improve the shopping experiences it offers its customers.

The new store, which measures 32,000-square-feet compared to the typical 100,000 to 150,000-square-foot club, emphasizes the use of tech with digital signage throughout the store and cashier-less checkouts using Scan & Go.

The club, which will carry between 1,000 and 2,000 SKUs, will offer self-serve returns, home delivery options and same-day pickup for online orders.

Sam’s has been expanding its club pickup service this year. At Shoptalk in March, Mr. Iannone said the service had been added to 60 clubs with plans to have 100 completed by the end of the year. While Sam’s has offered pickup for years, the new version includes access to the full assortment of merchandise at the club, an enhanced mobile app and a designated area adjacent to the club’s entrance for pickups, which can be completed in as little as 30 seconds.

In other Sam’s news, the retailer has opened its first repurposed e-commerce fulfillment center in Memphis, TN. It is part of the chain’s plan to open a regional network of similar facilities that will offer quick and free shipping (for most items) to club members. Earlier this year, Sam’s closed 63 of its traditional clubs with the announcement that it planned to convert some of them into warehouses to handle fulfillment of online orders.

DISCUSSION QUESTIONS: What do you think Sam’s Club intends to do with its new smaller format? Do you think management is looking to move into smaller stores or is it primarily focused on migrating learning from the Lower Greenville club to its traditional warehouses?

Please practice The RetailWire Golden Rule when submitting your comments.
Braintrust
"Just like superstores, club stores are going to have to figure out how to move into markets with smaller formats."

"OK, this makes sense. But put a different name on it. Sam’s is Sam’s."

"Bottom line? Giant club stores are overwhelming, confusing and — unless you’re the octomom — highly avoidable by going to a smaller competitor. "

Smaller-format, high-tech stores seem to be a disconnect with the warehouse “club” model. Given this apparent disconnect, it’s more likely that the new smaller store format is more of a laboratory to test ideas and identify process/services that could be applied in traditional warehouse stores than a standalone concept.

It seems odd that a club store would make a significant move into smaller stores, so it’s likely that this is more of a learning lab. Sam’s Club’s move to open “Club Junior” (if we can call it that) indicates a shift in focus to be more concerned with the shopping experience, and a continued move away from the business member.

Well. There are two, count them two empty shells of Walmart Neighborhood Markets within 10 miles of my house. So on the one hand I do think that, just like superstores, club stores are going to have to figure out how to move into markets with smaller formats, because you can only build so many warehouse stores on the edges of cities or centrally adjacent to several towns before you run out of good locations.

On the other hand, Walmart — and I’m going to just lump Sam’s together with that for now — has never managed to figure out smaller formats. And to have to be a member to buy anything, without the range of a warehouse store behind it, kind of changes the math on the value proposition of the membership, too.

I’m not one to dis experimentation — I think testing different assortments in a small format location is a very good idea. But I’m not holding my breath for this particular company to figure it out.

Nikki, I agree with all your points and I too applaud the discovery that can come from the experimentation. Consumer insights from such projects are often too abstract and the experiment lacks the agility for improvement in-situ. It takes a different kind of leadership and extraordinary executive sponsorship for such stores to find their own legs.

The whole concept suggests that Sam’s is confused about its purpose in life! Grab-and-go quick fixes are growing, but that is more the province of traditional grocers than warehouse clubs. Indeed, this seems to stray onto traditional Walmart territory.

There are some worthy technology initiatives in this, but it seems to me that Sam’s still needs to sort out its core proposition and reason for existence!

Good on Sam’s for testing a new model. I have to wonder what the plan is — Sam’s Club is holding its own (for now) against Costco. Perhaps they don’t know either?

There’s value in having a captivated club member who is willing to pay for a yearly subscription. Perhaps it’s time for Sam’s to be something else that their membership wants them to be besides more “club?” (less “club?”)

Perhaps they pivot from “club memberships” to a loyalty-based subscription model? This way they can downsize their inventory in-store while reordering people to reorder replenishable items online.

The idea of the loyalty-based subscription is right on track! I hope Sam’s is reading these posts!

Amazon Amazon Amazon! There, I said it. This surely smacks of a heavily influenced response to both Amazon Go and amazon.com’s thorn in Walmart/Sam’s Club’s side.

The whole industry is moving to better technology integration and more nimble/ better-targeted stores. Streamlined SKUs and cashierless or automated checkout is not especially an Amazon original, but given the other tit-for-tat Walmart jabs (did anyone say Marc Lore?), I think there’s a theme here. In fact, it’s kinda-sorta a mashup of Amazon Go, Amazon lockers, and Walmart.

Nevertheless, it has potential to be a winner if the execution is carried off well. It’s also an indicator of the next wave of changes coming to a retailer near you.

OK, this makes sense. But put a different name on it. Sam’s is Sam’s. It means something. It doesn’t mean this. I think they are breaking the rules of Branding 101.

This smaller format approach appears to be in direct conflict with the club business model. Sam’s, Costco and BJ’s build their business on collecting membership fees and generating high per-location sales volumes based on a large variety of products at lower per-unit prices. They were designed to draw customers from longer distances than traditional retailers.

As others have noted this may be a learning lab to see if they can find a way to penetrate smaller markets or enter markets where finding the large lots their traditional format requires is not possible. I noted the announcement didn’t mention the site offering fuel. The lower cost of fuel has been a larger draw for club stores and is the reason some members join. It also has proven to drive trips as most consumers still fill up their vehicles once a week.

Bottom line? Giant club stores are overwhelming, confusing and — unless you’re the octomom — highly avoidable by going to a smaller competing grocery chain.

Sam’s Club’s small-format model will make their store accessible to customers who don’t want to deal with the excess square footage and abyss of inventory at large club stores.

The new format will save customers time and energy. If advertised right, I can see this initiative bringing new customers to Sam’s Club and helping the chain retain relevance when Gen Z starts doing their own grocery shopping.

I hope Sam’s is wanting only to learn from this experimental store. Walmart tried opening a small format store in our neighborhood years ago — and it flopped. It had nothing that we expected from Walmart and appeared to be trying to be something Walmart isn’t.

While experimentation is good, retailers must grow along the directions their brand allows. If Sam’s hopes to suddenly undo all the brand equity they’ve built over the years as a “warehouse store” with small format stores, then they’ve got some hidden problems that should concern the market.

Hopefully management knows that their road to success is to embrace what they are — not attempt to reject it.

The concept of a smaller format is a good one, especially if the goal is to expand the market in terms of location and demographic. Millennials and Gen Z are not prone to love the shopping experience in larger format stores. With Walmart, the value proposition is very strong so this will continue to lure in shoppers. However, the goal in today’s retail landscape is to create multiple touch points with the customer. Offering a smaller concept store including ready-made meals and fresh goods for the quick grab and go is a great way to reach their existing market and expand to the younger markets who favor convenience and value. The problem is the membership fee. These smaller-store customers may not see the value of a fee with this type of format when there are already other retailers that offer similar concepts for free. Also, I agree with Professor Detroyer about the name — it MUST be different. As Warren Buffet said, “either hold a rock concert, or a ballet; but don’t hold a rock… Read more »
2
|
0
-   Share

Hopefully this will not become a distraction. They first need to work more on the large store format. Give shoppers a choice between Costco and Sam’s, Costco is the winner. They need to figure out how to beat Costco and not dilute their focus.

I guess I’m missing something, but this makes zero sense to me. A warehouse club is about purchasing items in bulk. For an individual you picture a purchase filling up someone’s storage room for months, so I don’t see the place for “grab-and-go” meals. Are there really that many big picnics people need to cater?

Indeed, my admittedly grumpy take on most of these “smaller format” concepts is that they’re the end result of market saturation. Not so much a good idea as “what else can we try?”

Trying out smaller footprint stores is an important strategy consideration for large-format retailers who want to get closer to more shoppers in densely populated areas. Big boxes need big territories and most of the prime locations are taken.

When the path to growth by expansion is near the end, a retailer must devise a plan for survival. There are two main choices: Grow same-store sales (really hard); or add another retail concept that captures different shoppers and/or trip types (really risky).

Can Sam’s cram a “load-up-the-SUV” membership club concept into 32,000 square feet and a small parking lot? Is the Sam’s brand extensible into an alternative merchandising format? Mr. Iannone and his team may be trying to learn the answers to these and related questions.

Braintrust
"Just like superstores, club stores are going to have to figure out how to move into markets with smaller formats."

"OK, this makes sense. But put a different name on it. Sam’s is Sam’s."

"Bottom line? Giant club stores are overwhelming, confusing and — unless you’re the octomom — highly avoidable by going to a smaller competitor. "