Should retailers prepare to serve customers in ‘post-car’ suburbs? 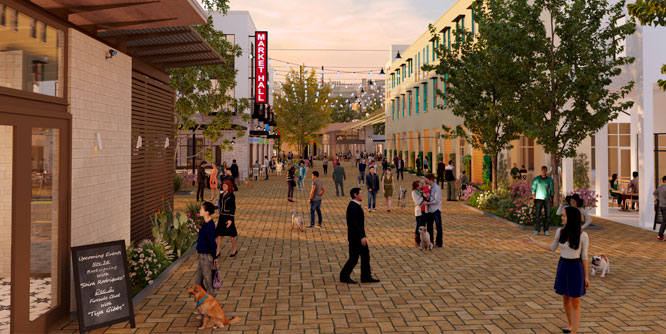 Tempe, AZ, is putting the finishing touches on a planned car-free community built to let its 1,000 inhabitants live — and shop — without owning cars.

The 17-acre community, called Culdesac, will open later this year, according to ABC 15. A vendor called Archer Bikes, which offers bicycle sales, repairs and rentals, recently closed the deal on the community’s final retail spot. The addition is consistent with what the article calls the community’s “post-car” ethos.

Towards the end of the 2010s, there was a growing buzz about retailers partnering with developers to work on concepts that would meet the needs of Millennials who were moving to the suburbs but were seeking city-style walkability.

Walmart in 2018 launched a website called Walmart Reimagined, which featured concept renderings of a store that would function as the “town center” of a community, offering entertainment areas, restaurants, outdoor spaces and health services.

In response to media enthusiasm, a representative of Walmart clarified to the Arkansas Gazette that the project was only in the exploratory stages and that the images on the website were meant to demonstrate possibilities, not plans.

Around that time there was, however, news of retail-anchored, walkable suburban developments cropping up in Arizona, Florida, Massachusetts and Texas.

Demand for such mixed-use suburban areas could accelerate with trends in homeownership. A study from Zillow found that since July 2021, suburbs have been growing faster than cities, GlobeSt. reported.

Even within cities commonly thought of as walkable, planners are considering changes to reduce reliance on cars.

A new plan backed by New York City mayor Eric Adams means to reduce the use of street space in NYC that is taken up by cars by 25 percent, according to Electrek. The initiative comes after COVID-19 forced the city to open up a significant portion of the city’s street to pedestrian use, which demonstrated how such a concept could work in the long term.

Please practice The RetailWire Golden Rule when submitting your comments.
Braintrust
"Ideally, retailers would be involved in the planning stages of these concepts. This would allow them to rethink their entire experience versus just plopping down a store."

20 Comments on "Should retailers prepare to serve customers in ‘post-car’ suburbs?"

Living, working and shopping in a car-less environment. Sounds like a re-invented mall! Let’s go!

Mixed use developments are certainly appealing and I can see more of them popping up. That said, I do not believe in a post-car society. It is simply not desirable for quality of life. Taking the example of Tempe, the video shows people cycling around in suits. In Tempe where today it will reach 105 degrees and we are not even at the peak of summer! Quite absurd. I cycle for leisure in Arizona and it is absolutely punishing during the late spring and summer, even in exercise gear. And what if people want to visit Target, do their grocery shopping at anywhere other than the small urban market that seems to be part of the community, or visit the local mall? To be fair, Tempe is a student town so this may be more suited to younger, non-family residents but I cannot see many people getting overly excited about ditching their cars – unlike the CEO of Lyft who is one of the co-founders of this venture and will no doubt be hoping it… Read more »
5
|
0
-   Share

Agreed Neil. Environment will be key.

There are many changes coming to our communities – the result of technology advances, climate change, increased energy costs, etc. In every community we have consulted with in the past year, these changes are being discussed not just in context of retail, but relative to the entire master planning process for the community. Typically it takes years, if not decades, to bring master plans to fruition, but the conversation is happening more broadly than it may otherwise appear.

Maybe your company should be renamed ‘mondofuori” (world outside). 🙂

I am wondering how merchandise gets into the stores in such an environment, if trucks are not allowed. Drones that lower the product vertically from the sky into a rooftop might work. Not so for pianos, furniture, and white goods…

Hi Bob, I didn’t notice anything on the Culdesac website indicating that they were quite that rigid about vehicles — the concept seems focused on limiting private vehicle ownership. But your observation does raise an interesting point for future developments of this kind — could innovations in last-mile drone delivery technology realistically manage delivery from suppliers to retailers? How much of the inventory process, from a robotic fulfillment center down the line, could be completely automated?

Oh please let it be so! Remember the first couple of months of the pandemic when people in LA could actually see the San Gabriel Mountains (which are right there)? A land of no cars, especially fossil fuel driven ones, is the first step to real green. Besides, work from home will make this even more possible and perhaps even necessary/profitable for retailers.

Town center communities that offer comprehensive services, shopping and entertainment within walking distance sounds like an appealing concept. While it isn’t for everyone, these car-less communities will have a strong appeal to people that want a more simple and convenient lifestyle. It is somewhat similar to some retirement communities where many residents commute around the property in golf carts.

I can definitely see communities like this becoming more common — or at least I hope so. Maybe today’s mall spaces, like Easton in Columbus, will do a better job of integrating residential spaces and others, in larger cities, will follow.

Ideally, retailers would be involved in the planning stages of these concepts. This would allow them to rethink their entire experience versus just plopping down a store and then having delivery available. Imagine an IKEA concept you could live above or a fully furnished IKEA concept in which you could rent an apartment turnkey from them — and have your meatballs and a slice of cake delivered to you fresh. Better integration in the planning process will lead to better experiences for the entire community.

“How” will depend on the retailer but I could see building lobbies having mini-shops, subscription programs, basically easier access to goods and services and things being less transactional.

Lots of possibilities. However a truly post-car U.S. won’t happen in our lifetime.

Haven’t many retail venues around the country sprouted up like this, in the form of “village life” complexes, in the last last 10 to 15 years? The success of these ventures has proven that they work, given the right mix of retail content. Yes, some have condos surrounding the venture, but I haven’t seen where those living in close proximity alone support enough traffic for all retailers in the compound. It has to have food and entertainment to become magnetic enough to create constant foot steps.

This is a spin on Disney’s Celebration town or The Corners of Brookfield (Wisconsin) where people live in a condo that surrounds a Von Maur department store, upscale retailers, entertainment spaces, and restaurants. One mimics small town life, the other urban living.

Culdesac sounds fun but people still need cars. It’s not like a true urban situation where public transportation is widely available. I am not so sure that the current partners are a draw. Other than Lyft, it’s interesting that none of the current partners are national brands. Personally, I think the shine would quickly come off of an environment like this when one is faced with the same venues day after day.

Bring it on!
Several years ago, I met a developer who specifically designed apartment complexes for young people who had no desire to have cars. His buildings were built in the suburbs within walking distance of the train station. They included small retail stores, Starbucks, boutique shops, and even small movie theaters. If someone needed a car to travel, there were facilities to rent them.

For retailers, think small, think about getting to know your customers personally, and sell lots of bikes.

The former CEO of General Motors predicted that by 2030, people will no longer own cars. I don’t believe it, but it may be a trend.

One of the top benefits of living in Manhattan is not owning a car. When I turned my last one in about 15 years ago, it was a tremendous freeing feeling.

Open spaces, walkable neighborhoods, reduced dependency on cars — sounds like nirvana to me. Open space centers, especially those that can combine entertainment and other options in their development, are not only popular, but they’re also good for the overall environment and for the communities where they exist. I’ve been surprised at just how popular a well-designed open shopping center can be. I live in Minnesota, where conventional wisdom would say no one wants to shop outside in January. And yet we have great examples of several new developments in town that have an open design concept and are packed, even in winter. Retailers, I believe, need to consider smaller footprint strategies to be ready to take advantage of these new developments.

I’m lucky to live in such a neighborhood that while not a planned community (it was built out in the early 1900s) has everything we need within walking distance. I can’t imagine going back to a place where a car is an essential part of your daily life. The “village square” or main street market concept I think dates back to the Middle Ages (perhaps the discussion then was do you need a horse…) and still works today.

A post-car world may not happen in our lifetimes. However we are seeing mixed retail and residential developments sprout up across the Main Street areas of the suburbs. There have been mixed results, but we have seen a segment of the population migrate to these city-like living setups without the price tag of a studio apartment in NYC.

Additionally, several factors will prevent a completely car-free society. Accessibility and distance are challenges, as well as weather conditions. We should realistically expect a more hybrid-like living situation, where residents can shop for some items without their car, not be completely free of their vehicles.

With the advances in the electric and hybrid car operating model, we hope to be more sustainable and reduce our carbon impacts.

How is that different from, say, Tanger Outlets?

Other than the car-less environment, I don’t see the difference between this and other developments that include residential, shopping, entertainment, etc. It does create a “captured customer,” which can be a great opportunity for the retailer than can go hyper-local with their merchandise.

Most urban spaces are already built and represent the majority of retail opportunity. So while new planning is an opportunity retailer need to focus on making these areas more convenient. Better deliver with self driving electric cars, drone delivery etc is the bigger opportunity in this regard.

More common? Sure. A significant amount of the population? No.

Braintrust
"Ideally, retailers would be involved in the planning stages of these concepts. This would allow them to rethink their entire experience versus just plopping down a store."