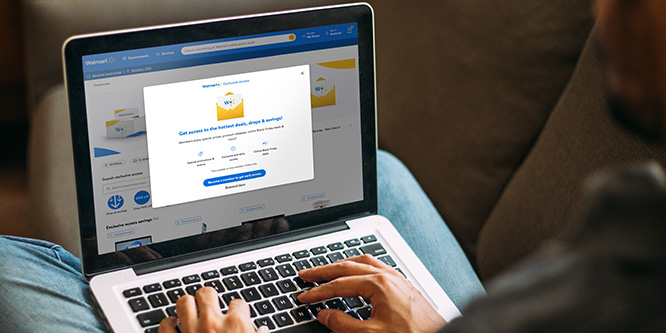 Walmart isn’t waiting on Amazon.com. The retailer has launched a special sales event that is exclusive to Walmart+ subscribers. Take that, Prime Day.

Members of Walmart+ yesterday at noon ET received online access to deals of up to 40 percent off hundreds of items, including gaming consoles, computers, tool sets and vacuum cleaner. Walmart will offer new “Black Friday-like prices” over the next two weeks on selected products while supplies last.

The retailer is running the event following its success providing Walmart+ customers early access to Black Friday deals as part of its “Deals for Days” sales promotion in the lead up to Christmas.

Walmart is offering the deal as an incentive for current members of Walmart+ to continue renewing their subscriptions that provide free grocery delivery and shipping on online orders, plus gas and prescription drug discounts.

The retailer is also looking to add new subscribers with a free 30-day trial offer. Estimates have put the number of Walmart+ members between 11.5 million (Consumer Intelligence Research Partners) and 32 million (Deutsche Bank).

Walmart CEO Doug McMillon declined to provide a subscriber number on the retailer’s recent earnings call. He did speak, however, about the company’s value proposition as a strength in inflationary times.

Mr. McMillon said that Walmart is prepared to help its customers because its managers do a good job of keeping costs under control and because the company has been dealing with inflationary pressures in Latin America and other places where it operates stores for years. This experience, he said, will help in the U.S.

Walmart reported that its U.S. online sales in the last fiscal year rose 90 percent over a two-year period. The retailer, which generates 60 percent of its business from grocery, is focused on Walmart+ members who spend more than non-members.

The retailer launched the subscription program in 2020 and later added perks such as discounted prescription drugs. Annual subscriptions cost $98 a year compared to Amazon Prime, which recently announced it was raising its yearly fee to $139. Walmart has not indicated if it plans to raise its subscription fees.

DISCUSSION QUESTIONS: Will Walmart’s current Walmart+ sales event be successful in attracting large numbers of new members to the service? Does Amazon’s recent decision to raise its Prime subscription rate provide an opportunity for Walmart?

Please practice The RetailWire Golden Rule when submitting your comments.
Braintrust
"While Plus and Prime are two different animals today, maybe Plus will get there one day."

"Amazon Prime has a much more compelling offering because of its entertainment content."

The success at specifically attracting new customers will likely depend on the products featured. Walmart has done an excellent job at building its brand portfolio, including national, exclusive, and new private brands to also attract new customers. These strategies combined are sure to catch the attention of new customers. I myself purchased some of the new Bonobos collection, which was a Walmart, acquisition some time ago. The ability to offer last-mile fulfillment from stores is also sure to make an impact on top of Amazon’s raised prices. Now is the time to strike, it seems.

Spending $98/year to get the value proposition (savings and early access plus convenient delivery) is expensive for the Walmart customer. The rule of thumb is to provide DOUBLE the value of the membership cost to retain the Year 1 member acquired. Offering a special shopping day creates word of mouth, but for members they should expect savings EVERY business day. Walmart+ membership churn will be 50 percent or higher year-over-year. Amazon Prime has a much more compelling offering because of its entertainment content.

Sure, the event will have success. One key is to make sure there are not a lot of outs. And the most important thing to consider in the construction of these events is that customers will expect the events to surface throughout the year – only bigger and better. So the bottom line is, when one company hits a promotion out of the park, expect all the others to jump in. Great prices on desired products always work, if they have adequate inventories to please the shopper.

Good points Rich. This is a “me too” approach that is emulating Amazon’s Prime Day events, as these have proven to work. Walmart+ is a smart strategy, however the challenge is competing with the value of Amazon Prime. Walmart+ will appeal to loyal Walmart customers but it may be a hard sell for customers that already have Amazon Prime.

This is the exact reason I feel strongly that holiday-based buying will become less and less relevant. Retailers need to be able to push promotions when it makes sense for their inventory status, and consumers will buy when prices are low. I also see this as the future of loyalty – providing really enticing incentives to engage with brands ongoingly.

When you run “Members of Walmart+ yesterday at noon ET received online access to deals of up to 40 percent off hundreds of items…” how does that get you new members?

Walmart has done a great job of building its online business. The Plus benefits are real and I suspect will generate significant loyalty. The Walmart shopper base can not be matched. Focus on getting those shoppers into getting into the Plus column. When someone comes in for a prescription, buys gas or checks out, give them a flyer and a 30-, 60-, or 90-day deal to sign up.

While Plus and Prime are two different animals today, maybe Plus will get there one day.

Walmart seizes an opportunity for its everyday low price leadership to stand out as inflation and Prime fees rise. As retail giants compete to woo us, consumers win.

Prime is the ultimate service as it provides so many perks to members from content to free delivery to special deals and offers, and loads more besides. It is well worth the fee, which is why so many people are members. Walmart+ is a reasonable scheme that is useful for regular Walmart shoppers, but is devoid of any bells and whistles. If Walmart wants to ramp up membership it needs to add more features and make the program much more attractive. Low hanging fruit has already been picked, expanding the audience requires better and bolder thinking – and this sales event is a start.

Amazon taught the whole world, retailers and customers alike, a very powerful lesson with Prime. The abundant and obvious value of the Prime membership fee. The depth and breadth of product and service offering. So Walmart is going to school on Amazon’s lessons. Sales and discounts are table stakes these days. Let’s see how creative Walmart can get with the Walmart+ program.

Once one experiences Prime, how can one drop it?

Bring it on, Amazon! It seems now that we have reached the bottom as far as speed of delivery is concerned, retailers are returning to the old incentives of price and promotions to drive traffic both in-store and online. Walmart is certainly taking it to Amazon and the pressure is well and truly on to see who can push the hardest. There is little doubt that other major retailers like Target will also join in, making it great news for the consumer.

I personally worry that Walmart, Amazon and all the other followers are overly leveraging these “special events,” which over time dilutes that value of each event. We have already witnessed a shift away from core holiday times like Black Friday and I worry we are just “spreading the peanut butter.” These events may drive short terms boosts, but haven’t proven that they drive sustainable year over year retailer growth versus just redirecting spend at a lower margin. Plus, now the executives will be stuck having to figure out how to comp this spike next year.

Braintrust
"While Plus and Prime are two different animals today, maybe Plus will get there one day."

"Amazon Prime has a much more compelling offering because of its entertainment content."