Where does Gap go next as CEO Sonia Syngal departs? 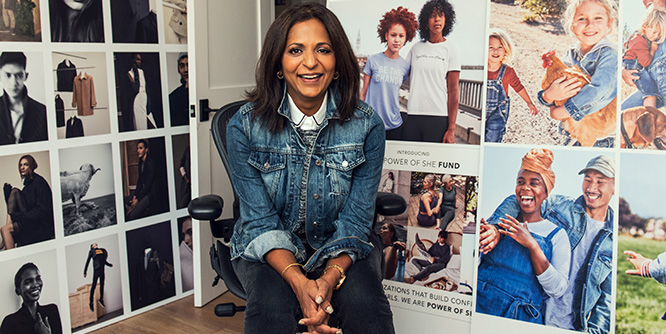 Sonia Syngal is out as CEO of Gap Inc.

Ms. Syngal, who stepped down from her position and from the board, effective immediately, will leave the company after a brief transition.

She thanked the company’s employees, co-founders Doris and Don Fisher and Gap’s board in her departure statement. Ms. Syngal talked about leading the company through a time of “unprecedented challenges.”

Bob Martin, executive chairman of the board, will replace Ms. Syngal on an interim basis as president and CEO until a permanent successor can be found. Mr. Martin has decades of retail experience including serving as CEO of Walmart’s international business.

“We are thrilled for Haio to bring his authentic leadership style to the team, backed by a strong track record of delivering growth through challenging times at complex global organizations,” said Mr. Martin in a statement. “Particularly in this environment, Haio’s sincere customer empathy, operational excellence, and passion for product and marketing innovation, will fuel Old Navy’s competitive strengths on its path to $10 billion, rooted in fun, family, fashion and value.”

The retailer has had a tough time of it in 2022. Its first quarter same-store sales were down 14 percent year-over-year with store sales falling 10 percent and online dropping 17 percent. Gap posted a net loss of 44 cents a share during the period.

Things are not looking bright for the second quarter, either. Gap said it is expecting that net sales for its second quarter will be down in the high single-digit range. It continues to deal with margin pressure as rising costs for freight and raw materials weigh on results. The company has also increased its promotional activity to optimize its inventory positions, which will have a further negative impact on its gross margins.

DISCUSSION QUESTIONS: What will it take to fix Gap Inc.? How should its turnaround strategy affect the company’s search for a new CEO?

Please practice The RetailWire Golden Rule when submitting your comments.
Braintrust
"Gap Inc. needs to revisit spinning off one of its banners to capture the value and extend the runway to recover and eventually thrive."

"I don’t know if there is a CEO who can tackle the set of 'whack-a-mole' problems at Gap, especially as it’s currently set up."

"There are times like this that shake the very foundations of companies."

12 Comments on "Where does Gap go next as CEO Sonia Syngal departs?"

There are no easy fixes for Gap. Notwithstanding the lack of consumer interest prior to the pandemic, the situation is now even more difficult as the entire apparel category, in particular, faces ongoing and persistent challenges with supply chain and increased costs. The board needs to find a CEO who has managed through tough periods and has the stamina for a multi-year recovery and re-build process. This will be heavy lifting.

Gap got lost in the myriad of apparel retailers and never figured out what they wanted to be and if they don’t know, customers don’t know and see no reason to go to their stores. I don’t know where they will go but in reality this requires a whole redo of the brand, what they stand for, and what they bring to the market. I hope they get enough time and board patience to do what needs to be done.

Gap is a company of many parts. Athleta needs an expansion strategy both in terms of geography and product mix. Old Navy needs supply chain fixes and a reinvigoration of the merchandise mix. Banana Republic needs to stay the course of reinventing the brand aligned with a more casual consumer. The Gap brand is the most problematic: it still lacks purpose, focus and excitement and needs a complete overhaul. There is a lot for a new CEO to do and, unlike Syngal, they should not be afraid of making bolder more decisive moves.

Gap’s survival requires pursuing strategic options rather than adjusting operational levers. Gap Inc. needs to revisit spinning off one of its banners to capture the value and extend the runway to recover and eventually thrive. In the past, there was consideration given to selling Old Navy; however such a spin-off would prove messy and complex from a systems and processes perspective. Gap’s corporate opportunity is in spinning off Athleta, which probably represents nearly all of the company’s enterprise value despite being only about 10 percent of sales.

Why does this company exist? What does it stand for? I know what Old Navy and Athleta stand for, more or less — but the rest of the banners? No clue.

Gap has a merchandising problem and the revolving door of CEOs doesn’t help at all. The company vacillates between being one company with shared resources and three distinct entities. It vacillates between separating channel operations and merging them. One answer must’ve been the right one, but I can’t even tell which it might have been.

How do you pick a new CEO in that kind of environment? And if you were an experienced CEO, why would you go there?

The perfect question: “Why does this company exist? What does it stand for?” The answer will not be pretty.

There are times like this that shake the very foundations of companies. Finding the ‘perfect fit’ new leader is like the old childhood game, hide and go seek. Mr. Martin apparently has decades of retail experience, including serving as CEO of Walmart’s international business. I think that makes him extremely capable of building a new team and store success. There is nothing better than absorbing the knowledge of a seasoned pro to grab the accelerator and start running.

Gap needs to rediscover and/or reinvent its personality. It became a bland, listless, uninteresting store to shop in a while ago. Their stream of negative comps attest to that. Gap made their name with brilliant marketing of everyday apparel. Notice I didn’t say ‘fashion’. A big challenge for Gap will be differentiating itself from Old Navy, so a dose of fashion will be called for. (A problem not solved by selling off Old Navy.) Or they can be the great purveyor of color they used to be. Either way, pulling out of the downward spiral into discounting and price promotions will be no easy task. Reconciling Gap + Walmart + YZY presents real difficulties when trying to craft a likeable personality.

The new GAP CEO should start with rethinking the merchandising strategy for all of its brands.

A continued focus on Athleta as it scales into more physical stores and outlets. The challenge with this brand is creating innovative product assortments and materials to set them apart from its competitors. Athleta must be run differently.

Old Navy is still trying to navigate the #bodyequality strategy and what sizes their customers actually want. Investing in digital tools to help solve the sizing and inventory management challenge should be top of mind.

The Gap is still attempting to remain relevant in a sea of more international retail players on the scene but has too many skus and needs to get away from promotions driving footfall.

Banana Republic should focus on continuing to build great menswear. All other categories are dated and uninteresting.

Retailers need to find their niche more than ever. Rethinking seasonality, number of skus and relevancy when there are so many more brands consumers can choose from.

You mean Gap bedding at Walmart wasn’t a slam dunk? Having people with Walmart experience is great for Target, not sure for apparel. Caught in an endless promotion cycle, grabbing at straws like exiting malls for freestanding stores, and several brands that have seen their better days won’t make a replacement easy.

Gap was founded more than 50 years ago. How many retailers can claim such a long successful history? Over those years, it has morphed well with changing trends. However a retailer can only do that for so long. We can name a list of newer retailers that have captured the mind of the traditional Gap customer. If it sounds like I am closing the book on Gap, I am.

I don’t know if there is a CEO who can tackle the set of “whack-a-mole” problems at Gap, especially as it’s currently set up. The revolving door of leadership at the brand and company level hasn’t helped matters for the past several years, preceding the pandemic.

Gap divisions (other than Athleta perhaps) are caught between supply chain problems, too much of the wrong inventory, the long-term decline of mall-based apparel, margin pressures, and so forth. Most of all, the core brand (Gap Stores) has lacked a clear identity for years. I’m not sure that any given “shiny new object” hired to run a division can turn this ship around.

Braintrust
"Gap Inc. needs to revisit spinning off one of its banners to capture the value and extend the runway to recover and eventually thrive."

"I don’t know if there is a CEO who can tackle the set of 'whack-a-mole' problems at Gap, especially as it’s currently set up."

"There are times like this that shake the very foundations of companies."