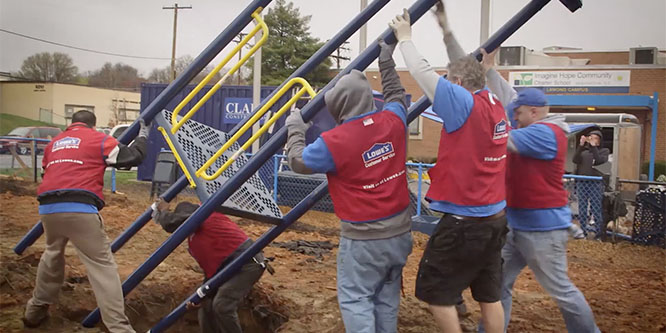 Lowe’s is eliminating “thousands” of assembly and maintenance worker jobs and outsourcing them to third-party companies.

The assembly workers handled tasks such as putting together wheelbarrows and grills for customers and constructing floor models. The maintenance workers primarily did janitorial work. The layoffs were reported to be a cost-cutting move although Lowe’s indicated it was re-prioritizing resources.

“We are moving to third-party assemblers and facility services to allow Lowe’s store associates to spend more time on the sales floor serving customers,” Lowe’s said in a statement released to media outlets.

Associates who were in these positions will be given transition pay and have the opportunity to apply for open roles at Lowe’s, although they aren’t being guaranteed the same hourly pay.

News of the layoffs was first reported by The Wall Street Journal. As of its fiscal year ended Feb. 1, the home-improvement retailer had approximately 190,000 full-time employees and 110,000 part-timers.

The news comes as retailers are facing labor cost pressures due to minimum wage increases across states and a tight labor market.

Marvin Ellison, J.C. Penney’s former CEO, has also made streamlining operations and lowering costs a priority since taking over as Lowe’s CEO in July 2018 to better compete against the home improvement space’s perennial leader and his former employer, Home Depot.

At the store level, Lowe’s has exited slow sellers, increased focus on omni-channel execution and placed a greater priority on the pro contractor business, traditionally an area Home Depot dominates.

In the first quarter, Lowe’s sales growth outpaced Home Depot for the first time since 2016, but its profit outlook for the year was lowered due to margin pressures. Mr. Ellison told analysts in May, “We made a lot of progress, but our transformation is clearly ongoing.”

DISCUSSION QUESTIONS: Will outsourcing assembly and maintenance tasks enable store level associates to spend more time on the sales floor serving customers as Lowe’s has indicated? Do you think Lowe’s is becoming more competitive with Home Depot as a result of the changes made by Marvin Ellison?

Please practice The RetailWire Golden Rule when submitting your comments.
Braintrust
"This looks more like a staff reduction by Lowe’s to improve profitability disguised as a strategic move to focus associates on sales activities."

"Something is missing from this story. How are laid-off workers going to improve customer service?"

Typically, outsourcing labor to a third-party does not cost less. The outsourcing company needs to pay their employees and mark it up to make a profit. This looks more like a staff reduction by Lowe’s to improve profitability disguised as a strategic move to focus associates on sales activities. The assembly and maintenance tasks still need to be done and it will be interesting to see if this actually reduces total costs.

Something is missing from this story. How are laid-off workers going to improve customer service?

As I understand it, our lead time if you want something assembled will go to 10 – 14 days from 3. This is not improving customer service. Neither was outsourcing deliveries or going to a national call center to manage installation services. It is all about cutting payroll and support expenses, like vehicle maintenance, insurance, other benefits.

I am not convinced that this is a move to improve customer service. If Lowe’s is laying off these staff they will not, by definition, be able to spend more time on the shop floor as the company claims. This is plain and simple cost cutting because Lowe’s needs to improve its financials and it lags Home Depot. In my view, this is not the way forward. The proper course of action is to create sustainable points of difference from Home Depot – perhaps focusing more on decorative and soft DIY – and to invest in customer service.

I don’t get the connection. This is a reduction in force, period. I cannot believe it will cost LESS for outside workers for the same number of hours, so service levels will by definition be reduced.

I thought Ellison would find a better home at Lowe’s than he did at JCP, but it seems he still believes he can cost control and “streamline” his way to success. Retail doesn’t work this way, and he ought to know better.

On the surface this outsourcing move seems like it will allow associates to spend more time with shoppers, but if these jobs were already being performed by staff dedicated to these tasks I am not sure how the customer experience changes. I suspect this is 100 percent a cost-cutting measure.

How often have you heard the line, ”We’re doing this so our store associates can spend more time with customers?” It never happens. These are layoffs, and that’s that. During his time at J.C. Penney, Marv Ellison had no “wow” moments and the chain struggled along. I see no difference with him at the helm at Lowe’s. Last year we heard and read all about the new campaign, “Do it right for less.” What happened? They never introduced it, never promoted it, and it did nothing for their business. That’s the new norm too often today; get the sound bite and news article and then do what you’re going to do. I sincerely doubt that a couple of months after these layoffs happen, we will see anything different at store level regarding the availability of store associates to assist customers.

I don’t expect these cost cutting moves to enhance customer service at Lowe’s. At one point it was positioned as a more shoppable alternative to Home Depot but that’s no longer true. Mr. Ellison also needs to invest in omnichannel, which was a big miss during his JCP tenure.

Wait a minute: if Lowe’s is “eliminating “thousands” of assembly and maintenance worker jobs and outsourcing them to “third-party companies,” how does that affect current on-floor staff? Think about it. The thing I would worry about is customers that want the item now, and assembled. what happens if the third party assembly staff is not present? Wait, now I get it: the floor person can put it together. Wait a minute, isn’t this new move about freeing the floor staff to deliver great customer service? That might be difficult when turning a screwdriver.

It’s unlikely this is anything beyond a cost reduction move. Of course, it could result in more associate floor time, though I doubt it. But I’m already seeing more associates on the floor in my weekly Lowe’s visits. The bigger thing Lowe’s needs is more store traffic.

Essentially doublespeak. A sure indication of the path ahead for Lowe’s under Ellison. History repeats itself, trying to save a sinking ship and at the same time propping up earnings always seems to be on the backs of the store level associates. Which in turn leads to poor customer service and poor customer experiences. To be continued.

I think the BrainTrust team nailed it. This is a convoluted explanation for what is ultimately layoffs and a cost reduction.

Outsourcing the maintenance and assembly functions will have little to no impact on in-store service levels. Getting some of these individuals to fill the open slot in the store might. I say might because they may be paid less and resent that fact. They will also not bring the product knowledge needed until after they are trained.

A reduction in workforce AND a reduction in product knowledge at the same time. Nothing like assembling something to get to understand and be able to advise a shopper.

All it is, is a bunch of PR talk. The jobs that are eliminated are not putting more associates on the floor to take care of the customer.

Sounds like the latest example of PR teams positioning a workforce reduction as a benefit for customers.

Obviously the answer depends on how many associates are left. If the same number as before, then “yes”; if a few less, then “maybe,” many less, then “no.” Given the reference to “formerly in those positions” it would seem to be the latter. Indeed, given that it sounds like specific in-house positions are simply being outsourced, the claim is disingenuous in the extreme.

This play is clearly a cost cutting move designed to shift costs to third party providers and off Lowe’s P&L. If this effort had been designed to increase the number of associates that are dealing with customers, then the layoffs of assembly workers would have to some extent been offset by an increase in on-floor associates, which is not the case.

Lowe’s can increase short-term earnings through this maneuver, but long-term, growth is always driven by finding and filling customer needs through great in-store customer experience.

This appears to be a smart choice — Lowe’s isn’t offering any less to their customers but are gaining flexibility by using outsourced option for these secondary services.

I think it’s still too early to evaluate Marvin Ellison’s leadership — but has made many good moves. Unfortunately, I believe his tenure will also be hurt by the Lowe’s shift to Craftsman which started well before he took the reins. It is one of those moves where a paper argument showing incredible strength could be made — yet it weakens Lowe’s, whose Kobalt brand had been known for increasing quality.

The switch from an exclusive brand developing powerful strength to an old tired brand shared with second rate retailers was a poor choice. Retailers need to be far more careful to avoid old perceptions of brand and look more carefully at the reality today.

I am enjoying the degree of disagreement here. If the disagreement is about Craftsman brand strength — let me recommend a Google Trends search on “Craftsman Tools.” Since 2004 there has been a continual decline for the brand. This is also what I’ve heard in consumer research. The clutter and harm done to the brand by Sears over the years puts it in a tough position. My summation is it’s a brand that many of us remember fondly from the 1990s (its peak strength years) and before. But today it no longer carries that strength.

These are not the in-store problems that Lowe’s is having. The company’s real problems are staff turnover, chaos in receiving and in-store warehouse, online and in-store sales systems don’t talk to each other, and a serious inability to drive register and internet inventory data upstream through the supply chain. These layoffs are short-term window dressing.

Braintrust
"This looks more like a staff reduction by Lowe’s to improve profitability disguised as a strategic move to focus associates on sales activities."

"Something is missing from this story. How are laid-off workers going to improve customer service?"