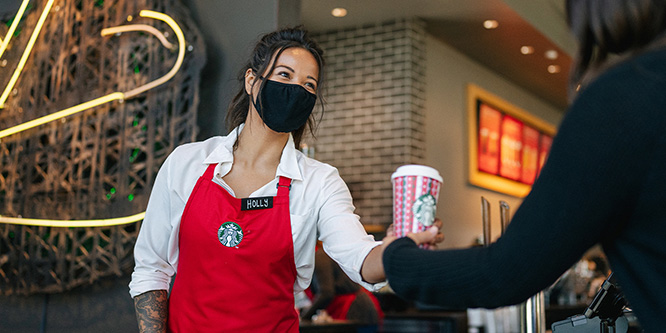 Tipping at Starbucks is as voluntary as it is anywhere in the U.S., but a new digital payment solution is now making it tough and awkward to avoid doing so. Some customers, and even some baristas, are displeased with the development.

Twitter users expressed outrage at the new point-of-sale solution, which prompts users to tip $1, $2 or $5. They must select the “No Tip” option if they want to pay only the cost of their purchase, according to Entrepreneur. Twitter critics appeared particularly irritated with the solution being implemented at the drive-thru. One angry customer pointed to the already high cost of coffee drinks at Starbucks and took the auto-demand for tips to mean that Starbucks was trying to cover up for not paying its workers enough.

On TikTok, an apparent barista posted a video criticizing the solution from the employee side, calling it “[one of the] top ten worse disasters ever to happen to human kind.” The response of the commenters on the TikTok, some from others purporting to be Starbucks baristas, are mixed. Some say the solution is slowing down the line when Starbucks already has a problem with throughput and order fulfillment speed, and that the added step is causing confusion among customers, sometimes even leading them to choose the wrong tip value. Others, however, say the solution is leading to more and bigger tips and is nothing to complain about.

Other retailers have implemented similar solutions, even as surveys are finding that customers do not like them.

A survey of 2,000 consumers by Time2Play earlier this year found that 67.7 percent of Americans felt pressured when the POS system prompted them to tip and 86.8 percent said that it made them uncomfortable.

There may even be a bit of a backlash to these types of POS solutions, as  CNBC reported that solutions that make customers tip at the point of sale are the ones customers are now most likely to ignore, as inflation and “tip fatigue” after a wave of pandemic generosity drive customers to pull back on spending.

DISCUSSION QUESTIONS: Will Starbucks’ new point-of-sale solution be good or bad for the chain in the long run? Will customers be irritated enough by things like this to change their purchasing habits?

Please practice The RetailWire Golden Rule when submitting your comments.
Braintrust
"Given that many employees and most customers are put off by this development, it’s not the right move."

"Whatever it is Starbucks staffers are making, from what I’ve seen it’s not enough. So hear hear, let’s make better happen again."

"I can’t figure out why someone working at a coffee place and other similar venues would deserve a tip."

23 Comments on "Will Starbucks’ new tipping prompt tick off customers?"

Tipping is always optional. I don’t blame Starbucks or other companies for asking for tips, and customers shouldn’t feel compelled to tip if they don’t feel it’s warranted. Since so many companies now offer tip options I doubt that it will change behaviors, but I would advise any company thinking about getting aggressive with their tip requests to be very mindful of how this impacts their customers.

Starbucks is not the only retailer implementing this. It can be irritating to the customer to have to stop and delay the checkout process to make a decision. When customers see a tipping cup, they tip at their discretion. This is no different, conceptually, than tipping on a terminal. The trend may take hold or may be resisted. Two direct outcomes are that tipping in such stores will increase, and the employees will pay heretofore undeclared income taxes on the formerly-cash tips.

Tip culture is getting out of hand. Restaurants in Las Vegas are now adding automatic gratuities to every check. This is common for large parties, but these auto-charges appear on every check. I get it, it’s to ensure the waitstaff is paid.

Asking for tips in fast food restaurants is a bit much. Consumers should be able to choose to tip at Starbucks or not. Embarrassing customers into tipping isn’t good for the brand.

The way things are going, could be.

Ever dine in Europe? 10% “conto” is common everywhere and not optional. This is a painless process and hardly obtrusive.

This is such a tough one. I think every single person is feeling this challenging economic time, even if not directly impacted. My guess is there’s more empathy for employees and a desire to tip, but there’s also far less capacity to do so given the financial situation. Given that many employees and most customers are put off by this development, it’s not the right move.

This has been around for a few years now. I find myself being prompted to leave tips at places (like Starbucks) where I would have never thought to do so. Will it anger customers? Eh, I don’t know. It’s so common now I don’t think it will. Will it generate more tips for employees? There will be some incremental increases from customers who don’t want to dig through menus to find the “no tip” option.
Will people let this get between them and their cup of Starbucks in the morning? I highly doubt that will happen in any measurable amount. If people are irked I suspect, like me, they’ll forget about it 30 seconds after the transaction is complete.

It ticks me off, but it won’t change my buying habits. However I will always choose the “no tip” option. It sounds like that alternative is somewhat difficult. Make it an easy and obvious choice.

I can’t figure out why someone working at a coffee place and other similar venues would deserve a tip. They are not providing service above and beyond what they must do.

While I agree with you, there are those customers that request some drink that has 20 ingredients and takes 15 minutes to make. Those are the customers that should tip the barista for making the drink and holding the other 50 orders up.

Twenty ingredients. That is above and beyond in so many ways.

Aren’t you already paying more than 100% premium for all the extra pumps?

The larger issue here is where does the tip button stop within different positions? Tipping used to be a reward system for a job well done at a restaurant. Now it is expanding to more and more positions — THAT is what is annoying.

I like this idea because I think the baristas deserve a shot at the extra income, just like most food service workers. I dislike it because I think the coffee and food are overpriced to begin with. Starbucks is great for the Wi-Fi and a place to hang out or meet somebody for a short while. It is not a go-to for great coffee or food.

Hmmm? I think that is what Howard Shultz envisioned. The Third Place.

Tipping used to be something that a customer did voluntary to thank their server for great service. Now more and more it is an impersonal request for money driven by technology regardless of the function the worker performed or how well they performed it.

I don’t have a problem with this solution. It’s better than the tip jar and it’s become so commonplace at other restaurants — Panera is the first that comes to mind — that the Starbucks customer shouldn’t be surprised. (That doesn’t mean you have to like it, or to give an added tip if you don’t feel like it.) As to whether baristas deserve a tip, that’s a different question — I personally feel they are offering a service above and beyond just serving a single cup of coffee.

Dick, what service are they offering above and beyond making a $5 plus cup of coffee which they have been trained to do?

I don’t hate the player, and I know people in service jobs are struggling, but the game is getting exhausting. Tip fatigue is real, and pervasive. I am just waiting for the day I see tip options show up when I tap my credit card on the self-checkout kiosk in my local DIY store, where help is notoriously difficult to find!

Pre-app, I used to tip Starbucks associates all the time (probably too much) because, of all retail employees, few are more deserving of a nice tip than them. They are constantly running to keep up. Then the app came along, which is great, especially for order and pick up, but lousy for tipping. So my take on this is: it’s about time. Whatever it is Starbucks staffers are making, from what I’ve seen it’s not enough. So hear hear, let’s make better happen again.

Prompts at point of sale are the “bane of my existence” said most Retail or F&B IT/POS/Architecture leaders. Pay with a gift card at SBX and get Stars. Want to give your barista a tip, pull a $1 out of your wallet. Remember those paper things called money? Shop the grocery store … prompted for phone number, fine I’ll comply even though the prices for groceries in Chicago are so ridiculously inflated that getting “member savings” is total BS. Then you are prompted at same POS for charitable donations, handed tickets to accumulate and get a frying pan plus asked if you want cash with today’s transaction. And let’s not forget all the prompts just to fill your gas tank — anyone running their car through the wash while it’s snowing? Enough … basta! Can I just shop the store, get my Venti Hazelnut Latte and indeed tip change or cash into the glass tip jar? Indeed, this new move is very likely intended/designed to combat SBX worker dissatisfaction with their total compensation and blunt… Read more »
5
|
0
-   Share

Braintrust
"Given that many employees and most customers are put off by this development, it’s not the right move."

"Whatever it is Starbucks staffers are making, from what I’ve seen it’s not enough. So hear hear, let’s make better happen again."

"I can’t figure out why someone working at a coffee place and other similar venues would deserve a tip."