Did Gap just learn that no good tweet goes unpunished? 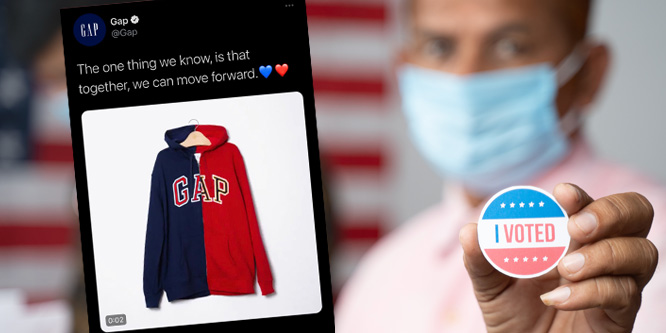 The recent and still undecided presidential election was one of the most contentious races in modern U.S. history. Even before the voting was done, there were some politicos and pundits talking about the need for whomever won the election to try and heal the deep divisions within American society.

The marketers at the Gap apparently agreed with that olive branch sentiment and sought to get a head start with a Twitter post of a hoodie, half blue and half red, with the caption: “The one thing we know, is that together, we can move forward.”

Reaction to the tweet, much of it negative, was swift. The retailer deleted the tweet within a couple of hours of its posting. The photo of the hoodie, as it turns out, was not of an actual item for sale, but just imagery to support an aspirational message.

“From the start we have been a brand that bridges the gap between individuals, cultures and generations,” said a Gap company statement published by The New York Times. “The intention of our social media post, that featured a red and blue hoodie, was to show the power of unity. It was just too soon for this message. We remain optimistic that our country will come together to drive positive change for all.”

In a speech given yesterday by Joe Biden, the Democratic Party presidential nominee offered a similar message to the retailers.

“I know how deep and hard the opposing views are in our country on so many things,” said Mr. Biden. “But I also know this as well. To make progress, we have to stop treating our opponents as enemies. We are not enemies. What brings us together as Americans is so much stronger than anything that can tear us apart.”

Mr. Biden’s belief that the rifts within American society can be healed will be tested in the days ahead as misinformation is spread about the election’s integrity and as the Trump campaign seeks to stop vote counting in the remaining states that are trending in favor of his opponent. Mr. Trump sought to declare victory after the polls closed but was widely rebuffed for trying to rhetorically circumvent the electoral process.

Gap’s social misstep follows an announcement last month that it plans to significantly cut its store count, primarily in malls, and focus even more on its digital business going forward.

DISCUSSION QUESTIONS: Do you agree that Gap made a social media mistake with its unity hoodie tweet? Should Gap do something now, beyond its removal of the tweet and the company statement, to address this apparent misstep?

Please practice The RetailWire Golden Rule when submitting your comments.
Braintrust
"Put the post back and when someone throws out a negative comment, respond back that it’s time to come together. Don’t let the trolls get you down."

"Anytime you have to explain your tweet you know you’re in trouble. For Gap – a company which isn’t exactly an influencer – this could be the final nail."

"Yes people are angry, but how can you argue with trying to unify our country? E pluribus unum!"

24 Comments on "Did Gap just learn that no good tweet goes unpunished?"

I am sure Gap’s intentions were good and the message itself is not disagreeable, in fact it is something we could all learn from. However, the post was made at an inappropriate and sensitive time and it entered the political arena as a fight is in progress. As such, it is not surprising that Gap got punched. I don’t think Gap needs to do anything beyond removing the post. This is a storm that will quickly blow itself out.

Unfortunately, someone will always find a way to twist the meaning of a message. Personally, I feel the intent of the message was very positive and non-offensive and I don’t think it is necessary to readdress the deleted tweet. Hopefully, people have more important things to focus on – like the pandemic that is now becoming dramatically worse.

I wouldn’t have pulled it. Stand for something for gosh sakes Gap. It’s as if they were embarrassed by a universal message. I hope they do nothing more except they should make the hoodie and sell it.

Put the post back and when someone throws out a negative comment, respond back that it’s time to come together. Don’t let the trolls get you down.

I don’t see this as a major issue. It just highlights how divided we are. And social media is a brutal place to try to unite.

It wasn’t a mistake. It was genuine and heartfelt and timely. We are in a highly polarized moment of hair trigger reactions. There’s risk if not certainty of provoking very energetic reactions in this environment. That doesn’t necessarily mean that well intended initiatives should be retracted or in any way apologized for. Next thing you know somebody is going to suggest something crazy like “count these votes but don’t count those votes over there.”

Politics and religion. If you want to make it a part of your culture, be ready to suffer the consequences of customers (and employees) having negative reactions, even as “down the middle” as you think you might be. That said, this sweatshirt is not really controversial even if it is political. It’s as close to having an American flag embroidered on the hoodie as you can get. Still, it’s synced up to the election, which is very controversial. Just mention the word “election” in the office and watch the difference responses you get. But I digress. What has happened is the ad has gotten the attention beyond a typical ad. It’s generating additional publicity. Good strategy most of the time and, in spite of the controversy, it appears that it is still good.

Wow. Our country is deeply messed up.

Unfortunately, unity looks a lot more like division in the design chosen. I had neither seen nor heard anything about this hoodie until seeing this thread. And my comment follows nothing more than seeing the picture. But that’s how the nanosecond attention span of consumers process these things too. Given that this is coming from a savvy social marketer like Gap, it seems almost seems implausible to characterize it as a “mistake.”

Very sad. Now in America, calling for unity in our country is punishable on social media? On top of all the traumas of 2020, COVID-19, wildfires, lost businesses, human hardship, children prevented from going to school, parents juggling a myriad of challenges (the list is long). Why are the few somehow empowered to cancel the hope for unity of millions of Americans? Why are retailers so intimidated by social media? Is good now bad and bad is good?

Anytime you have to explain your tweet you know you’re in trouble. For Gap – a company which isn’t exactly an influencer – this could be the final nail.

I would not have done it this way. But given that it is done, I would do exactly what Steve suggested. “… when someone throws out a negative comment, respond back that it’s time to come together. Don’t let the trolls get you down.”

On the product, they should have considered how raw the nerves are. There doesn’t seem to be a middle ground. Thinking it through, make the left side of the hoodie RED, the right side BLUE and have them morph into Red, White and Blue in the middle.

How raw is raw, you may ask? On Saturday my wife and I were walking the city. Someone walked by and said, “I hate New York.” My wife thoughtlessly but enthusiastically responded, “I love New York.” She got back “You must be a f*cking liberal.” Sadly, that wasn’t the end of the person’s rant. Really?!

So a tweet with a message of unification, and nothing to sell – i.e. no profiteering arbitrage to any side — was met with a negative response? And subsequently pulled? smh.

A well-intended boilerplate comment about national unity gets taken down in an hour because Gap gets some pushback? Talk about letting the trolls prove your point about the need to pull together as a country. If Gap hasn’t reposted the tweet, it should — and then the company might want to have an internal conversation about how to have the courage of your convictions.

It’s a photo of a sweatshirt and a message of unity, how can that be bad? Maybe you don’t like the sweatshirt, but you can’t not like a message about hope. Well, judging from some of the vitriol I have seen on social media lately, maybe you can.

The cardinal rule of social media for retailers whose target customer base includes pretty much everyone: offend no one. It’s clear to me from the months – no years – of vitriol from all directions that any political commentary is going to melt a snowflake somewhere.

The hoodie needed one more color. It should have been red, white and blue. Though even that might have been considered a problem in some quarters. Messed up is the order of the day.

Politics are by nature in a two-party system … divisive. I applaud Gap for trying to bridge the divide with a positive message — which I’ll note is the *exact* type of message we saw from retailers at the beginning of the pandemic (i.e. “we’re in this together”). I think the visceral response of anger is indicative of where people’s emotions are, but a negative reaction seems illogical, IMO.

I don’t normally wear hoodies, but in this case, I would buy one because this is the message everyone needs to hear and embrace.

Bob Phibbs nailed it, but I’d simply add — to Gap — stand for something or you stand for nothing. Yes people are angry, but how can you argue with trying to unify our country? E pluribus unum!

Ouch! What is that saying about good intentions … they never quite end up where you expected.

Certainly this is the right message of unity that we all need right now, but stepping into this space with anything less than authenticity is asking for it. The hoodie wasn’t even real. They should have stopped right there.

Braintrust
"Put the post back and when someone throws out a negative comment, respond back that it’s time to come together. Don’t let the trolls get you down."

"Anytime you have to explain your tweet you know you’re in trouble. For Gap – a company which isn’t exactly an influencer – this could be the final nail."

"Yes people are angry, but how can you argue with trying to unify our country? E pluribus unum!"