Is Texas messing with retailers? 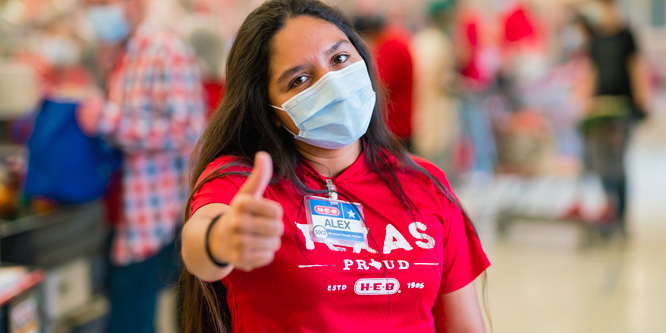 As the expression goes, “don’t mess with Texas,” but retailers are finding they may have little choice. Many retailers found themselves facing a dilemma this week after Gov. Greg Abbott announced that Texas was lifting its mask mandate in the state.

The decision by the governor made the state the largest in the nation to remove its mandate on face coverings. It took many by surprise, considering that Texas remains among the hardest hit states when it comes to the novel coronavirus pandemic and fresh concerns are being raised about four different variants, including those considered more easily spread, that have been discovered in the state by medical researchers.

Retailers have long enjoyed the hands-off approach that Texas takes to business, but this latest action has many wondering if Mr. Abbott and backers of his action have fully considered the situation it puts retail operators in. Many have had to deal with a substantial part of the population who have chosen to disregard the science when it comes to COVID-19, including those who still cling to theories that it is no more deadly than the flu or, worse, that it’s a hoax made up by Democrats and their allies.

“Tremendous strides have been made in recent weeks lowering the rate of COVID-19 infections and vaccinating seniors and other vulnerable populations, and President Biden’s announcement yesterday that every adult will have access to a vaccine by the end of May is great news,” Jason Brewer, EVP, communications and state affairs, Retail Industry Leaders Association, said in a statement responding to the lifting of mask mandates. “We should not jeopardize this progress with a premature victory celebration.”

Bill Thorne, SVP of communications and public affairs at the National Retail Federation, said retailers have the right to determine and enforce their own policies, including banning customers without masks from entering stores. In July, NRF called on retailers nationwide to establish and enforce mask mandates.

Texas is not the only state that has recently lifted mask mandates. Iowa, Mississippi and Montana also no longer require masks in public places. South Dakota has never implemented a mask mandate despite having one of the worst records when it comes to per capita spread of the disease, associated hospitalizations and deaths.

DISCUSSION QUESTIONS: Are governors that lift face mask mandates making it easier or harder for retailers to conduct business in light of the current COVID-19 realities on the ground? How do you think retailers operating in these states should respond?

Please practice The RetailWire Golden Rule when submitting your comments.
Braintrust
"NRF and others are right to back continued masks to protect front-line workers – who are pawns in the optics of the governors."

"Politics and public safety have not mixed well for the past year, and now Texas is upping the ante."

"With Texas’s highly misguided mandate, retailers have a social responsibility to keep their associates and customers safe."

43 Comments on "Is Texas messing with retailers?"

Now that there is actual national leadership from the federal government on COVID-19 measures, the states should be taking their lead from them. Freewheeling governors, like in Texas, are making it more difficult for retailers who are trying to comply with federal regulations and keep their shoppers and staff safe – the state legislation that loosens restrictions will only exacerbate the problem.

What government does and what retailers do are two completely different things. While Texas may have removed a legal mask mandate many retailers – including Target, Starbucks and Kroger – are uncomfortable with this and are still requiring customers to wear masks in their stores. That is their right and customers should respect their rules. Of course, the mixed messaging between state and private businesses is very unhelpful at this point in the crisis.

Neil, unfortunately I just read in the Houston Chronicle that Kroger (along with H-E-B) will no longer require customers in Texas to wear masks, even though it will be required of store employees.

Retailers should see this as an opportunity to step up. Ignore the Governor, enforce mask rules, and make sure shoppers know you’re doing it for their health.

This is a throwback to the spring when conscientious retailers were adopting a “no mask, no entry” policy. With no national or state policy, now retailers can be bullied. NRF and others are right to back continued masks to protect front-line workers – who are pawns in the optics of the governors.

“With no national or state policy, now retailers can be bullied.” AND THEY WILL BE!

As a retailer, good luck trying to enforce a store-only mask mandate in Texas when the governor has said it’s not needed. Without commenting on the wisdom of the governor’s decision (OK I have to, the word “wisdom” shouldn’t even be in the same sentence as his move) it puts the retailers who want to enforce mask mandates in-store in an impossible and potentially dangerous situation.

It was completely irresponsible for the governor to do what he did. Retailers and their workers will be left holding the bag. How are they supposed to close this gap left open by their elected officials? There will be many conflicts that will need to be resolved in-store and that is unfair.

We’ve already seen how much more challenging it can be for store personnel to enforce mask “rules” versus enforcing mask “laws.” Politicians in Texas are risking countless lives and making many lives more difficult with this decision.

Mask wearing should be a health and safety issue, not a political issue. Front-line workers have worked tirelessly throughout the pandemic and have suffered more than most. They need to continue to be protected. Unfortunately, empathic retailers will be caught in the crossfire.

The retailer has the right to enforce whatever rules they deem necessary for the safety of their employees and customers. If that means wearing a mask (and practicing other precautions such as social distancing, limiting number of customers in store, etc.), then that is their choice.

Anti-maskers are not a protected class. So retailers are perfectly within their rights to establish a “no mask, no service” policy. Ideally it should be the government mandating this, so that retailers don’t have to make decisions that impact public health. But the unfortunate reality is, masks have deeply divided the public. Even in my neighborhood on NextDoor in suburban Illinois – a democratic, mask-supporting community — the opinions are very polarized.

Tremendous strides may have been made in recent weeks to lower the rate of COVID-19 infections but that doesn’t mean the virus is gone. The decision to act as if the pandemic has ended is irresponsible.

No mask mandates will make it hard on retailers. Big Box stores that require masks will have better luck than smaller chain stores and independents. Retailers that require masks have been put in the tough position of enforcing store policy; we have already seen violent acts against front-line employees over masks when states deem they are mandatory. I am concerned for peoples’ safety and I am sad that the country may lose the healthy momentum we have worked so hard to gain.

Retailers with mask policies are likely to continue them in Texas (and nationwide) for the next several months. However, they’re now back in the uncomfortable position of confronting customers who refuse to comply because of a perceived “free pass” from Gov. Abbott. The ugly scenes we saw last spring and summer are going to happen again, compounded by the “COVID fatigue” that we are all feeling.

The bigger risk to retailers and restaurants is the chance that cases, hospitalizations and deaths will start to climb again in Texas and elsewhere. This will not only undo a lot of the progress being made by vaccinations, but will also lead to yet another round of closures. It doesn’t need to happen, and I hope other politically ambitious governors can restrain themselves for a little longer.

This move by Texas is premature at best. It’s irreponsible in light of everything we now know. So now the retailers have to be the “bad” guys and enforce their own mask and social distancing policies. I’m sure businesses could started a broader opening profile if there were an “and” involved. Open “and” wear a mask. Open “and” practice appropriate social distancing for restaurants. It’s extremely unfortunate that science and economics are at odds with one another here.

Unfortunately, retail has become a theater for those who want to espouse their political views. Retailers have a right to set reasonable rules for safety and conduct and should continue to execute these rules until we reach herd immunity. This latest change in policy will certainly make it harder for retailers to enforce mask wearing and, unfortunately, will bring more chaos into the aisles. We should honor our retail front-line workers, not harass them for doing their jobs.

The burden of social and economic change today weighs heavy on the shoulders of retailers because government partisanship blocks all progress. Voting is such a slow process to enact change, it feels faster to simply shop with the retailers who do the right thing, be it mask wearing, equal opportunity or environmental protection. This puts retailers in a tough spot – deciding which customers to win in a country that is almost split down the middle. I think we are going to see more retailers exit states that make it too difficult to straddle a middle line – especially when it comes to mask wearing, where everybody needs to do it to be effective. I get the concern Texas has for struggling businesses, but the struggle will remain with shoppers afraid of anti-maskers. Remember the Alamo – standing ground was noble, too many died.

We have discussed many times the challenges front-line employees have with customers who refuse to follow mask guidelines. The governor’s decision will only make it harder and more contentious. It will not be long before a retail worker is hurt by a non-complying customer.

Politics and public safety have not mixed well for the past year, and now Texas is upping the ante. Going all in to boost the state’s economy and return to social normality is commendable if you control the virus’s spread and most of your citizens are vaccinated. Otherwise, the governor is shifting the limelight from the failures over the great freeze to announcing the state’s opening on Texas Liberation Day. Retailers going against the state’s bully pulpit face the difficult task of doing right by their customers and employees at the risk of verbal abuse, if not actual assault. The politics of popularity can be dangerous.