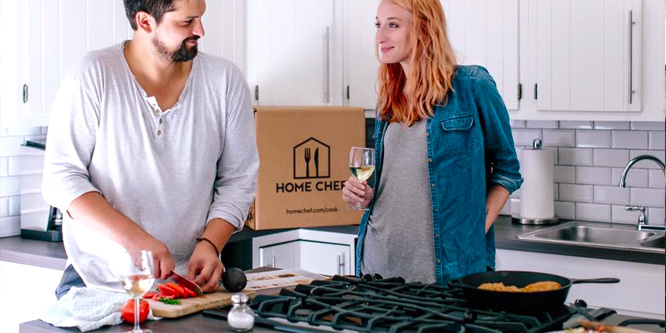 Kroger has been busy making deals. Less than a week after announcing an exclusive deal with Ocado to have the British company develop automated warehouse facilities for its business, Kroger has reached an agreement to acquire Home Chef, the largest privately-owned meal kit company in the U.S.

The deal price involves an initial payment of $200 million with additional payments of up to $500 million over the next five years if Home Chef achieves agreed-upon milestones. Home Chef, which saw its sales grow 150 percent last year to $250 million, has posted two consecutive profitable quarters. The company, which was founded in 2013 and delivers around three million meal kits a month, will become a subsidiary of Kroger following the close of the deal.

Kroger, which has developed its own Prep + Pared meal kit line for sale in more than 525 of its stores, will fold that business into Home Chef, which will now also be sold in many of Kroger’s 2,800 stores in addition to its own website. Home Chef operates three distribution centers in Atlanta, Chicago and San Bernadino, CA, putting product within a two-day delivery window of 98 percent of the country’s population.

“As one of the fastest growing meal kit companies in the country, Home Chef is poised for even more explosive growth,” said Yael Cosset, Kroger’s chief digital officer, in a statement. “We admire their focus on the customer, culture of collaboration, dynamic experimentation, and demonstrated financial success. Home Chef’s combination of culinary expertise and a customer data driven decision-making process is right in line with Kroger’s vision to serve America through food inspiration and uplift by providing meal solutions for every lifestyle.”

With the merger, Kroger and Home Chef move into a business that has been attracting attention and investments from major retailers (Amazon, Albertsons, Walmart) and consumer packaged goods companies (Campbell Soup, Smithfield Foods, Unilever). The market for meal kits, according to Pentallect, reached $2.2 billion last year, with annual sales expected to grow between 25 percent and 30 percent over the next five years.

DISCUSSION QUESTIONS: Do you approve of Kroger’s decision to acquire Home Chef? What will the acquisition mean for each company’s business? How will the deal impact the meal kit category?

Please practice The RetailWire Golden Rule when submitting your comments.
Braintrust
"This is a great move and will appeal to the next generation of shoppers and consumers for the Kroger banners."

"I guess I’m the only one who feels like Kroger is thrashing a bit, trying a little bit of everything to get business up."

"This is an easy way for mega-companies to stay on the cutting edge, by purchasing a home meal kit business."

Grocers have to diversify their procurement and distribution options, and this is another way of making inroads deeper into the home for a retailer. If the meal kit service uses data-driven behaviors and preferences to make the decisions for meal kits, then this will be even more successful. And Kroger is well known for their personalization capabilities, especially under Yael’s leadership. This is a great move and will appeal to the next generation of shoppers and consumers for the Kroger banners.

I’m with Dave. Different things appeal to different people and Kroger is taking steps in the right direction to accommodate them.

This is a smart decision. The meal kit market is growing rapidly and it is taking share from both CPG firms and supermarkets. Kroger needed a response to that, and Home Chef is a sensible great company and a good choice.

It will be exciting to see how Kroger can use its channels and distribution to expand the business.

Overall, Kroger now seems to be coming to grips with many of the disruptions in the marketplace. That bodes well for the future of the business.

Kroger seems to be following the Walmart method of buying companies, rather than developing additional revenue streams in-house. In this way, they can cherry pick the skills and businesses they want and can see a path to integrating them into the company’s business strategy.

IF this is the future (and I’m not sure it is) then it’s probably a good deal for Kroger assuming the financials made sense — we would expect they did. Kroger will give Home Chef more exposure and Home Chef will keep food dollars within Kroger, so that makes some sense. Right now, I think the meal kit category has yet to sort itself into dominant, sustainable players, so maybe not much long term impact.

I guess I’m the only one who feels like Kroger is thrashing a bit, trying a little bit of everything to get business up. I can barely remember the entire list of recently announced initiatives, but I do remember the private label apparel and warehouse automation buy.

Some make sense, some don’t, and I really hope there’s a strategy in there somewhere.

This is a great acquisition for Kroger and for Home Chef. In order for the economics to work for the meal kit businesses, they need the supply chain backbone of a food retailer. The obstacle to scaling for meal kits has been the acceptance of the masses, not the top 10 percent who can afford the premium.

Kroger has to think about how best to integrate Home Chef into their stores to maximize consumer acceptance. Streamlining the consumer’s food shopping is key to the success of meal kits. Consumers are still looking for meal solutions and this is a way for Kroger to outpace their competitors by providing this solution. If Kroger can deliver a good product at a good price that provides convenience to the customer, then this acquisition will pay off tenfold.

Overall, this is a good move for Kroger. It’s all about creating convenience for the customer. At the same time it solves a customer’s problem; what’s for dinner? And it makes total sense for someone who sells groceries to get into this business, rather than compete. As other retailers move into this part of the retail grocery/food business we’ll have what I refer to as the “Meal Kit Wars.”

I wonder if this and the Ocado move aren’t acts of desperation on Kroger’s part. Executives in Cincinnati see what’s happening between Amazon and Walmart and believe the only way to remain relevant in front of customers and, perhaps more importantly, investors is to buy their way into the digital/complete serve business. It would likely be more effective to innovate internally or maybe with the help of consultants.

Another thought is what this means for dunnhumby. After all, shouldn’t the shopper data analyzed be the service offered to Kroger to determine the best way to engage the customer? Or maybe the numbers just said to go out and buy a meal solutions company and partner with a last-mile delivery solution…

This is an easy way for mega-companies to stay on the cutting edge, by purchasing a home meal kit business. It is simply a better investment for Kroger to allow Home Chef to provide the service and place instant displays inside their stores very soon. Walmart has been buying companies for years and Kroger is following in their footsteps. Trader Joe’s may be next, with their all-organic meal kits to satisfy the higher-end foodies, and Starbucks probably will have complete breakfast kits to go. Until this trend slows down (which will be in the near future) it should be a profitable add-on for the more affluent areas.

The increase of meal kits reflects the drive for convenience and speed, much like shopping online rather than wandering around a store. People are increasingly looking for convenience and to remove the burden of “what to cook tonight.” There is also another element to this trend — it gives the retailer a chance to get customers to try new things, include new ideas and then drive repeat purchase of these items in-store. Allowing customers to be more adventurous without the risk of failure can add value to the retail experience and customer loyalty, and also lead to additional sales of higher margin none-core items, provided the retailer thinks that way and looks at their marketing, in-store display, inventory and signage. If coordinated properly this can be powerful. Grocery shopping is not seen as enjoyable and anything a grocer can do to add some fun back into the process is good news. By buying Home Chef, Kroger can short circuit the process and lead in this area. They must ensure that they make the most out… Read more »
1
|
0
-   Share

Remember the trite saying, “People gotta eat.” Certainly, Kroger is redefining itself from simply a grocery store to a provider of your grocery and fresh foods with a variety of customer friendly options. The expansion of meal kits not only is a differentiating factor in the food retail space, it is a tremendous opportunity for Kroger to expand further into the foodservice arena, offering fresh and innovative meals without the need to go to a restaurant or order from one. Think of the savings, dollars (no gratuity) and time (no need to dress and transport the kids). I believe the traditional foodservice business may have more to be concerned about when it comes to meal kits, regardless of the providers of same.

Kroger by this and other recent moves, e.g., Ocado, recognizes that the old game is over and a new one has realized significant growth in its place. Kudos to Kroger and additional warnings to those still competing only in the old game.

As busy consumers value convenience, meal kits have been a hot item for shoppers as an alternative to eating at restaurants or cooking from scratch. Nearly every grocery chain has meal kit offerings and even Amazon looks to be adding it soon. As consumer preferences change, retailers need to be agile and adapt to new customer expectations.

Kroger’s entry into the meal kit category with its Prep + Pared meal kit line has proven to be successful and the acquisition of Home Chef is a move to elevate the offering and accelerate expansion of meal kits to all of its stores. Home Chef has a good brand recognition and image, so it appears to be a smart choice for the Kroger acquisition.

Kroger has a great opportunity to meet consumers’ needs by expanding not only distribution of meal kits via its stores and online channels, it can also diversify the types of kits its shoppers want and need.

Braintrust
"This is a great move and will appeal to the next generation of shoppers and consumers for the Kroger banners."

"I guess I’m the only one who feels like Kroger is thrashing a bit, trying a little bit of everything to get business up."

"This is an easy way for mega-companies to stay on the cutting edge, by purchasing a home meal kit business."