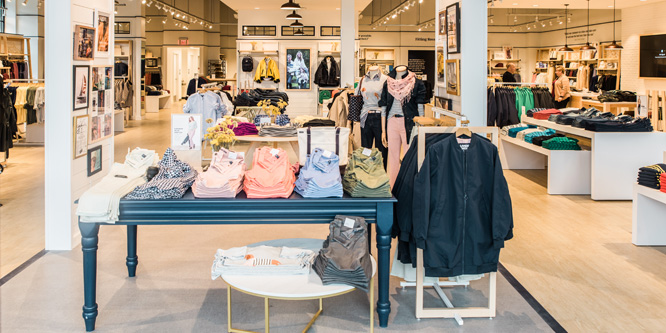 Lands’ End simply cannot do this Sears thing anymore. The outdoor-influenced clothing retailer has announced that it is closing the remaining 40 store-within-a-store locations it operates inside the department store chain, after reducing the number from 174 at the beginning of last year.

“We’re looking to exit as quickly as possible,” Lands’ End CEO Jerome Griffith recently told the Chicago Tribune. “We’re not in their [Sears’] long-term plans, and they’re not in ours.”

Lands’ End has found its footing since being spun off by Sears Holdings in 2014. The company has posted seven consecutive quarters of revenue gains and six consecutive with positive earnings before interest, tax, depreciation and amortization (EBITDA).

On the retailer’s fourth quarter and full year earnings call in March, Mr. Griffith pointed to Lands’ End digital sales growth as a significant factor in its past and future gains.

“We focused on our internal and external search efforts, improved mobile site speed and leveraged the price clarity across all platforms,” Mr. Griffith told analysts (via Seeking Alpha). “We are pleased that these efforts contributed to an increase in e-commerce sales in the fourth quarter led by double digit U.S. e-commerce sales growth.”

Lands’ End has been able to prosper over the past year because it has succeeded in attracting new customers and retaining those who regularly shop from the retailer. This is particularly true in digital commerce where Lands’ End has used a “test and learn approach” to become more responsive to the needs of its customers, according to Mr. Griffith.

“Sales on mobile devices grew more than three times as fast as the total. In fact, during the quarter, mobile traffic exceeded desktop traffic for the first time,” he said. “These efforts further paid off as our customer file once again increased double digits in the quarter, reflecting double digit growth in new customer acquisition.”

The retailer has also benefited from selling its merchandise on third-party marketplaces, including Amazon.com. Lands’ End began sales on Amazon in 2016.

The recent success of Lands’ End is not entirely dependent on digital channels, however, with the retailer posting double-digit comps for stores open at least a year in the fourth quarter. The chain opened five new stores last year with plans to open between 10 and 15 new standalone locations this year. Longer term, Lands’ End is looking to open between 40 and 60 new locations over the next few years.

DISCUSSION QUESTIONS: What do you think are the keys to Lands’ End success over the past couple of years? What will it need to do to sustain the positive arch it is currently on?

Please practice The RetailWire Golden Rule when submitting your comments.
Braintrust
"For decades Lands’ End has been predictable and reliable, and famous for customer service, and that didn’t change during the Sears years."

"It is good to see that Land’s End survived their time spent within the Sears ecosystem."

"Having led the acquisition I’m admittedly biased, but the strategy was not only sound, it was much like what is happening now with DNVBs."

My only question is why it took Lands’ End management so long to extricate themselves from Sears. Lands’ End has a following and still reasonable brand equity, notwithstanding the historical challenges it’s faced. Lands’ End is on the right track: 1.) get out of Sears, 2.) continue to build out its online business, including third-party marketplaces and 3.) open stores slowly and carefully – don’t overbuild.

And my only question is, isn’t ESL the major shareholder in Lands’ End? This is like a bizarre film from the ’50s.

Lands’ End has been successful in finding and securing a loyal audience. That’s what it takes to be successful in any business. It’s wise to pull out of Sears because Sears, unfortunately, remains a thing of the past. Sears no doubt helped Lands’ End build identity during a time when it had a customer base, but Lands’ End has successfully evolved into its own thriving business and will continue to succeed. They seem to understand the significance of maintaining a proper blend of e-commerce and brick-and-mortar. I expect Lands’ End to continue to grow and remain successful.

For decades Lands’ End has been predictable and reliable, and famous for customer service, and that didn’t change during the Sears years. The key going forward will be attracting a new generation of shoppers. It’s heartening to hear that mobile shopping is spiking.

The acquisition of Lands’ End was ill conceived from the start. Lands’ End is a brand with brand recognition and a loyal following. All the acquisition did is dilute some of both. The time for Lands’ End to extricate itself from the boring, drab, seldom-frequented Sears stores (that is a pity, too) is yesterday. Returning to its former self should not be an overwhelming task for Lands’ End. Best of luck to them.

Having led the acquisition I’m admittedly biased, but the strategy was not only sound, it was much like what is happening now with DNVBs.

The original plan was predicated on the Sears stores needing to upgrade significantly (which obviously never materialized under Lampert’s leadership), for Lands’ End to become a (mostly) exclusive differentiating brand in apparel (like Kenmore and Craftsman) and to build Lands’ End’s free-standing store presence.

What happened was new management ignored the strategy we presented to the board and opened too may Lands’ End shops at Sears, putting too much inventory in most of them and grossly under-marketing the launch. The plans to roll out Lands’ End stores were abandoned. In the meantime, Sears disinvested in store visual merchandising and staffing. And then Lampert showed up.

Obviously one can never know what would have happened, but to this day I still believe the essence of the strategy was sound. Of course I don’t possess a time machine.

Lands’ End has “stayed in its lane” from a fashion sense — which is not to be construed as “did not change styles” but rather as stayed in step with its core shopper. Fortunately for Lands’ End their shopper and the online/mobile shopper have converged in the form of a pre-Millennial demographic. You know, the ones that have money to spend and will spend it to look sharp.

Lands’ End could have been the bedrock to Sears apparel, if that was ever even possible. It’s certainly not Lands’ End’s fault that it didn’t happen. Lands’ End was the lipstick. Sears was the — well, you know. It’s not the fault of the lipstick. Lands’ End has a clear, obvious and believable brand promise. Solid quality. Fair value. No confusion. Applause for not getting seduced by what would have been an awkward quest for fashion.

Land’s End was always one of the better offers with Sears. So much so that it often looked incongruous among the awful ranges that Sears itself put together. I see no advantage to Lands’ End to partner with what remains a failing retailer. Sears brings it very little in terms of customers, demographic reach, or brand profile. Indeed, it probably damages Lands’ End to be associated with Sears. As such, it is a sound strategy to move on and focus on other routes to market.

Lands’ End’s online presence, ability to personalize offers, and maintaining quality merchandise have allowed the brand to grow while catering to a loyal customer base with a stream of relevant physical catalogs. I do not associate the brand with Sears (and haven’t for the last five years), and there isn’t a single good business argument for the relationship, however tenuous, to continue.

Bottom line, Lands’ End’s management should continue a focus on quality, increasing digital-mobile presence, and personalizing offers. Don’t dilute the brand by trying to be more for the sake of unsustainable growth. Stay with the long game.

Lands’ End still enjoys incredible customer loyalty but other players in the sensible basics space, like Duluth Trading, are ramping up. Lands’ End is smart to go the owned retail route. It’s the best way to showcase its arrays of styles and colorways. For Lands’ End, multiple purchases are the secret sauce and brick-and-mortar is the key ingredient.

Good management – good strategy. Getting out of the wake of the Sears tsunami was a huge blessing and being able to execute on its own strategy has proven to be a recipe for success. Continuing to build and execute on its digital strategy while smartly opening stores combined with a focus on attracting their next generation of shoppers will sustain the momentum.

It is good to see that Land’s End survived their time spent within the Sears ecosystem. I only wonder what took them so long to make their exit. Sears’ approach to managing (or mismanaging) so many iconic brands, including Land’s End (and Craftsman and Kenmore, etc.) still seems shockingly short-sighted. I am glad to see Lands’ End has thrived since their separation.

Having led the Lands’ End acquisition when I was at Sears it’s hard to be totally objective. But given that Sears never managed to mount a turnaround it is shocking that they hung with Sears as long as they did AND managed to survive some misguided brand pivots.

The key to Lands’ End success has always been knowing its core customer, being obsessed with quality/fit and understanding direct marketing (which started in catalogs and now has obviously migrated to the the online word).

The key going forward is to carefully broaden their audience (avoiding what I call the “customer trapeze”) and to lean into a harmonized retail experience with a much stronger physical presence (owned stores and potentially a partnership which is more on-brand).

Returning to their roots as a reliable company from which to direct order — and one with a few retail stores. Good to see. I hope they survive.

I’m concerned by the CEO quote about mobile ordering. If he thinks that’s significant, then Lands’ End has troubles. Mobile ordering is simply a different type of online ordering — not an end in itself. That means the increase he crows about is probably an across-the-industry increase.

Lands’ End (along with Zappos) has always been considered one of the most customer-centric companies in the retail industry. I am surprised it has taken this long for them to extricate themselves from Sears. Now they can use their extraordinary customer service skills to continue to build on their brand. It will be interesting to watch the progress.

Hell yes. Lands’ End is viable and has shifted well with the tides. Sears is badly aging compost that needs to join Montgomery Ward in the retail history books.

Well there’s strategy and then there’s execution. Whether Lands’ End ever belonged in Sears seems well debated here … but I doubt few would debate that the execution of well assorted, and in stock positions in-store was ever achieved, leaving the strategy stranded.

Lands’ End executed well against their brand promise even during the dreary Sears days. Their merchandise, along with their go-forward strategy, should ensure they continue to be successful.

Braintrust
"For decades Lands’ End has been predictable and reliable, and famous for customer service, and that didn’t change during the Sears years."

"It is good to see that Land’s End survived their time spent within the Sears ecosystem."

"Having led the acquisition I’m admittedly biased, but the strategy was not only sound, it was much like what is happening now with DNVBs."