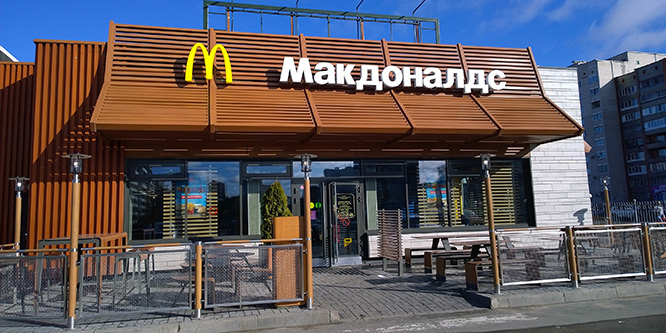 McDonald’s and Starbucks have announced a suspension of operations in Russia following that country’s unprovoked attack on neighboring Ukraine that has resulted in thousands killed and the largest refugee crisis to hit Europe since the second world war.

Reports in recent days questioned why McDonald’s, which owns and operates 85 percent of its locations in Russia, had not yet joined other U.S. and European-based companies in shutting down its operations in the country.

The fast-food giant, which employs 62,000 people in Russia, announced yesterday its decision to temporarily cease operations in the country. The company is continuing to pay the salaries of its employees in the Ukraine and has donated $5 million to its Employee Assistance Fund.

McDonald’s CEO Chris Kempczinski wrote in an email yesterday to employees and franchisees that the company has a 66-year history in Russia and that its stakeholders in the country include vendors and the millions of customers it serves every day.

“At the same time, our values mean we cannot ignore the needless human suffering unfolding in Ukraine,” he wrote. “Years ago, when confronted with his own difficult decision, Fred Turner (former CEO and chairman) explained his approach quite simply: ‘Do the right thing.’ That philosophy is enshrined as one of our five guiding values, and there are countless examples over the years of McDonald’s Corporation living up to Fred’s simple ideal.”

Starbucks, which is primarily franchised in Russia, made the decision to suspend its operations, as well.

CEO Kevin Johnson, who last week condemned Russia’s attack on Ukraine, wrote that it would not ship products to stores displaying its banner in the country. “Our licensed partner has agreed to immediately pause store operations and will provide support to the nearly 2,000 partners in Russia who depend on Starbucks for their livelihood.”

“Clothing is a necessity of life,” said CEO Tadashi Yanai.  “The people of Russia have the same right to live as we do.”

DISCUSSION QUESTIONS: Will retailers and brands that continue operating in Russia lose sales in Western nations as a result? Will those that quickly suspended operations gain brand equity points with consumers in the U.S. and other nations that support the Ukrainian people?

Public support is clearly with Ukraine, and so any brand that continue to operate in Russia faces a potential backlash, including short term sales impact. And while it’s hard to say what lasting impact these decisions will have on brand equity, some decisions can’t be decided based on public opinion alone or short term benefit — sometimes it’s just doing the right thing – which is what companies like Starbucks and McDonald’s have done.

The rapid response by some of the biggest brands in the world has to put peer pressure on those who are staying put. And (without presuming to understand the mind of the Russian consumer), the average citizen should be questioning the disconnect between the disinformation stream and the disappearance of so many household names.

In my personal view, Western brands should completely cease operations in Russia. There must be serious consequences for the barbaric actions of Putin, and making Russia a pariah state is one of them. Uniqlo’s justification is flimsy and pathetic. The Russian people are not going to be completely without apparel if Uniqlo withdraws. In any case, the Russian people simply do not have a right to live comfortable lives with nice shops while their country is slaughtering innocent men, women and children in a sovereign country. Yes, they may suffer somewhat – but the blame for that lies squarely on the shoulders of Putin, at whom they should direct their anger and opprobrium.

Yes, I think retailers and brands that continue operating in Russia will lose sales in Western nations. There are some risks for them, including the fact that the U.S. is starting to think about “buy local.”

Bigger than that, Japan is the parent company of Uniqlo and Japan’s response to the crisis has been loggy vs most other countries. So, really, it’s not a good idea.

I would expect that there will be blowback for these companies. Sentiment in the West is solidly with Ukraine.

I think it is too hard for consumers to keep track of who is still operating in Russia as we are so far removed however, I do think a brand is going to get brownie points for taking a stand. Brands have become more and more active in recent years and consumers, especially younger generations, want to ensure their dollars go towards a brand that aligns with their own values.

Operating in Russia is going to be tough to begin with now that Putin has clearly become a threat to world peace. Cancelling operations makes good business sense. The unfortunate aspect is thousands of citizens losing their jobs. Deloitte killed all projects and quoted 3,000 alone. Maintaining operations is by choice, Uniqlo isn’t going to get “cancelled” by deciding to stay open.

There should be a zero-tolerance strategy for Russia’s actions. While governments have to do everything in their power to mitigate the horrors in Ukraine and avoid a global escalation, corporations have the ability to cease their operations in Russia. Combined with the global sanctions, the mass exodus of major businesses from Russia will have severe impacts on their economy and the Russian people.

The Russian people have benefited from having Western brands presence in their country since Mcdonald’s opened their first location in Moscow in 1990. Companies such as Starbucks, Apple, and others closing shop are pursuing the appropriate socially and politically responsible strategies.

The first thing we must understand is that what we call the biggest American corporations are not American, they are global entities without patriotism for any country.

Putting that aside, the decision is a moral one. The retailers can choose to follow the moral position of the liberal countries of the world rather than of the leadership with no moral bounds at all. Those countries leading the way to deter Russian aggression had determined that the best way to do that, (short of war which is not the best) is to decimate the Russian economy and make those who hold the power strings change the leadership. Or make the citizens so upset that they take to the streets and threaten the stability that now exists in Russia.

Will retailers and brands that continue operating in Russia lose sales in Western nations as a result? Only if they realize that the brands are doing business in Russia. I would bet against the majority in the U.S. having any idea who and who isn’t.

I doubt that withdrawing will gain brand points. Companies need to withdraw simply because it is the right thing to do. In situations like this, we can’t trust the “invisible hand” of the market to guide ethics – that must come from elsewhere.

There will absolutely be a segment of consumers around the world that will permanently remove Uniqlo from their preferred retail shopping list based on this decision.

Some branders may lose sales in the near and mid-terms, but consumers have notoriously short memories. As to those who “quickly” suspended operations, the real question is, what took you so long?

Timing is a critical part of “doing the right thing.” If companies had cut Russian operations off on Day One or Two it’s one thing. If they wait over a week to see which way the winds are blowing, not so much. The invasion wasn’t any more immoral yesterday than it was on the first day. Either you – and your brand – believe what you believe or you come off looking a bit opportunistic. There isn’t a lot of virtue in being the last company to jump on the boycott “brandwagon.”

Retailers can be purposeful in all aspects of their business as they serve communities. It sends a strong signal to cease operating in Russia, in solidarity with Ukraine and the free world. The challenge will be deciding when it’s appropriate to re-open their doors to Russian consumers as this will also send a strong signal.

I believe U.S. consumers and other nations that support the Ukrainian people will give kudos and brand equity to the companies who take this or similar action. It would appear to be a no-brainer for other companies to follow suit. Ethical reasons demand such a stance and the potential economic pressure placed on Russian consumers may help to end the conflict sooner rather than later.

Uniqlo’s over-exposure to the domestic Chinese market was in jeopardy just recently over the Xinjiang cotton boycotts, with the requisite manufactured store protests and admonition from Beijing. The company capitulated. Now of course they’re in a Catch-22 because the CCP’s line is to not criticize Putin. They’ll be forever tainted in the West, and Fast Retailing should probably start looking to wind up Uniqlo operations outside China and Russia.

Not everything need — or even should — be measured in marketing terms (grumble, grumble). That having been said, yes, I think there will be (at least some) backlash against companies that are perceived as putting profits first; but I don’t see brownie points for “doing the right thing.”

Let’s see how long this goes on. If it goes on for a week or two, not a huge deal. If it goes on for months, the businesses that have made this decision have just written their ticket out of Russia (and that is certainly within their power to do).

I get the idea here is to make the citizens impacted above so mad and angry that they somehow convince the Russian Government to stop what it is doing, but I’m not really sure that is going to be effective.

So will those citizens impacted above direct their anger toward the Russian Government or will they direct it toward the Western corporation that made this decision?

Feels like the employees, vendors, and customers are being unfairly caught in the middle of a double edged sword.

I feel brands should not get influenced by short-term intentions driven by nations or competitors. Before straightaway closing operations in any nation, brands should take a step back and analyze whether this critical move aligns with their brand values and community. It’s time we consider the fact that Russian citizens are not at fault and they should not suffer the consequences of government’s propaganda. Letting civilians suffer might appear brutal and won’t connect with the community as large, thereby hampering the brand position in the future.