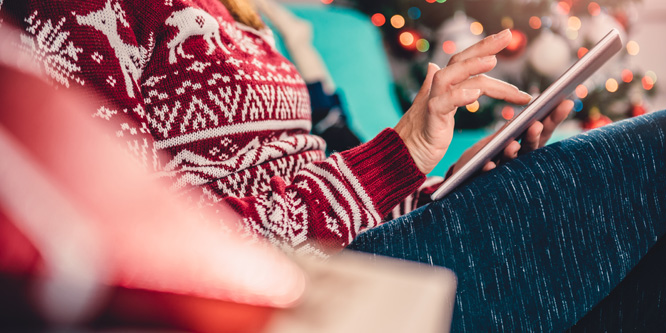 “With Christmas now rapidly approaching, consumers increasingly jumped on their phones rather than standing in line,” said Taylor Schreiner, principal analyst & head of Adobe Digital Insights, in a statement. Adobe Analytics tracks sales in real-time for 80 of the top 100 U.S. retailers.

Salesforce concurred that holiday shoppers are continuing to move “closer to a ‘mobile only’ reality,” finding that 74 percent of traffic and 60 percent of digital orders were placed via a mobile device on Thanksgiving. Salesforce uses Commerce Cloud data and insights covering more than half a billion global shoppers.

NPD’s 2019 Holiday Purchase Intentions Survey that came out last week predicted that 25 percent of online shoppers planned to use a smartphone for holiday shopping, growing from 19 percent two years ago. Those using smartphones for shopping were found to be more likely than those who use other devices to order BOPIS.

Twenty-two percent of NPD’s respondents used an app to pay for holiday purchases in the store last year. Thirty-nine percent of those respondents planned to use apps more often this holiday season. “Mobile shopping continues to gain traction as phone screens expand and retailer apps become more adept at offering the quick transaction experience consumers are looking for, wherever they are,” said Stephen Baker, VP, industry advisor for NPD.

The overall holiday predictions that have arrived post-Black Friday have been mixed. First Data Insights found a 4.2 percent rise in brick-and-mortar sales on Black Friday, but both ShopperTrak and RetailNext reported in-store traffic declines.

DISCUSSION QUESTIONS: How is mobile’s use as a research and purchasing tool changing traditional holiday shopping behaviors? What adjustments might retailers need to make in response to changes in online and in-store engagement and traffic flow?

Please practice The RetailWire Golden Rule when submitting your comments.
Braintrust
"Too many retailers are still looking at their desktop computer screens when making decisions about how their site should look and operate. "

"From a shopper’s perspective – you can buy that perfect gift WHEN you remember it. No writing lists and hunting for items one by one."

"It’s fine to talk about how online and in-store activities are supporting each other — that’s great. But must we (over)use “mobile,” per se?"

Mobile is a retailing juggernaut and this year is proof positive. As the multiple data sources in the article confirm, online purchase via mobile phone continues to grow quickly. Retailers already understand that delivering a great, seamless online/physical store experience is critical, but what some retailers may not fully appreciate is how vital a role mobile plays in the process. It’s not good enough to have a solid web presence, sites also need to be optimized for mobile – online is mobile.

While mobile usage is increasing, retailer-specific apps are not gaining enough traction. Having users download and install a retailer’s app has significant implications on loyalty, stickiness and conversion. Expedia for instance gives double points when travel is booked though their app, as opposed to their website. Other retailers would do well to emulate this and incentivize their app usage.

“Mobile First” needs to be the mantra of all retailers and the focus needs to be on the user experience. Too many retailers are still looking at their desktop computer screens when making decisions about how their site should look and operate. This causes a terrible experience in many instances and lowers conversion rates. This is one time when looking at your phone in a meeting is actually the correct thing to do!

Mobile changes the game on traditional shopping behaviors in so many ways that it’s difficult to pinpoint the most important. For me personally, the timeliness of mobile has the most impact. While conversing with friends and family, it’s as easy as two clicks to fulfill their wish. Two clicks and the buyer can immediately check off one of the many to-dos which hit their list at the end of the calendar year.

People don’t want to waste time and mobile shopping-assisted in-store purchases, like BOPIS, are increasing sales and decreasing traffic. There is less wandering and more purchasing which seems to be consistent with the statistics above.

This increase comes even without true omnichannel real-time inventory information with most retailers still using safety stock at store level to compensate for the one-day lag time caused by decentralized point of sale.

When we are truly in a real-time mode both sales and margins will increase.

Interesting. I spoke with a retailer about mobile sales versus in-store sales. He pointed out that as he monitored mobile sale item purchases, customers who came into the store and purchased the same item were also open to purchasing one or two other add-on complementing items when they were shown them.

I would definitely concur with his assessment. In-store customer sales opportunities increase exponentially when they are provided exemplary service. This is analogous to the “assisted versus unassisted strategy” that has been proven to increase revenue. Thank you for sharing, Rich.

The traditional customer journey and path to purchase has transformed in our mobile-first digital world. Getting the digital experience right and optimized should be a top priority for all retailers and brands. Mobile commerce has evolved to the point where it becomes a ubiquitous part of the discovery, engagement, and conversion in the customer experience journey. If the integrated mobile experience is not a top imperative for your company going into 2020, then it’s high time to put it on the top of your list.

While approximately 90 percent of all purchases occur in and around the physical store, mobile commerce has matured to the point where customers that are having a positive experience may even convert online, or decide to go the BOPIS route, where retailers then have an opportunity to engage with customers once they go to the store to pick the products up.

In China, four out of five e-commerce dollars are generated through mobile purchases. It is worth repeating, “location, location, location.” And you can’t get a closer purchasing location than in one’s hand.

Operationally, the changes retailers could make would be to take someone who had been on the floor serving customers and use that staffing capacity to pick orders instead (and pack and stage in the backroom). Same staffing, but arguably better utilization of employees and inventory. Separately, I would imagine that bringing digital into the stores more by way of endless-aisle and clienteling capabilities would help them leverage technology while in the stores. DSW has recently done a roll-out of new in-store technology which I loved seeing — this helps leverage the trend of consumers using their own mobile devices to quickly access information, and instead allows the store associate to be a conduit for them (likely increasing sales to offset slumps due to lower traffic comps).

Count me in as skeptical, unimpressed, and confused. The picture above shows someone shopping on a tablet, not a mobile phone. Big difference! Do tablets count towards mobile? If so,how about laptops? Seems like a lot of these analyses are relying on fairly arbitrary/meaningless distinctions.

It’s fine to talk about how online and in-store activities are supporting each other — that’s great. But must we (over)use “mobile,” per se? I bet that the amount of sales volume attributable to mobile phones is far smaller than the numbers above suggest.

In short, I suspect that we’re making a lot out of a little here.

From a shopper’s perspective – you can buy that perfect gift WHEN you remember it. No writing lists and hunting for items one by one.

Mobile purchasing includes smartphones and any mobile devices. Total mobile purchasing (U.S.) in 2018 was $208 billion and will grow to $514 billion by 2022. The percent of mobile last year was 39 percent of total e-commerce and will move to 58 percent in 2022. Breaking down digital commerce by device coming off of Black Friday weekend for total e-commerce, 60 percent is desktop, 35 percent smartphones, 5 percent tablets. The desktop has the highest order value at $157 as compared to smartphones at $109. Retailers who have invested in IT infrastructure, in-store processes and labor to ensure a smoother synchronization of physical and digital commerce including BOPIS strategies will be the winners this holiday.

With the increasing size of mobile devices including tablets, it is just more convenient and it is the new “candy aisle” for impulse and convenience shopping. Retailers need to make mobile applications friendly and easy to transact with as few clicks and swipes and possible (and address the security issue of storing customer financial data) and create experiences in the store to drive purchase either in store or via mobile. Offering mobile charging stations in stores wouldn’t hurt either this holiday season.

This is the natural evolution of retailing. I’d guess no one is surprised by these findings. As convenience increases with the learnings of each season, this will only evolve further in this direction.

Mobile shopping/browsing has surpassed desktop and it will soon surpass desktop for purchases. Personally, I prefer desktop browsing and purchasing at home, but I still do a lot on my phone when I am in a different room than my laptop. The big driver of mobile shopping/buying is while you are in stores. Mobile shopping is a great tool to check prices and reviews before you make an in-store purchase.

As others have noted, we need to design for mobile first!

There is no denying the power of mobile as a disruptor in the retail industry. The proliferation and convenience of mobile devices has completely changed shopping behaviors and elevated customer expectations. Mobile is an important part of the customer journey as many consumers use it as a research tool throughout their journey to look up brand, product, pricing and inventory information. In a recent survey, a third of consumers even used their phone while they were in the store to do further research. Retailers need to ensure that their offerings via mobile are relevant, responsive, and real-time to ensure they are meeting today’s customer expectations.

Mobile is more than just a purchasing channel. Almost 50% of transactions are impacted by online research (browsing, etc) and mobile makes up the majority of this, so over 1/4 of all retail transactions are influenced by mobile. What retailer is willing to sacrifice 1/4th of their business just because they didn’t want to invest in mobile-first solutions? Mobile is in, for so many reasons.

It is refreshing to see mobile usage increase during this holiday period. It has now become the preferred method of engagement among many individuals. I am looking forward to seeing more retailers reward their customers for using their “native” app.

Some retailers must invest in their app infrastructure to ensure that their customers experience a seamless transition among all touch points. Overall, I am optimistic about the future of mobile and with retailers maximizing their resources to elevate their platform.

Braintrust
"Too many retailers are still looking at their desktop computer screens when making decisions about how their site should look and operate. "

"From a shopper’s perspective – you can buy that perfect gift WHEN you remember it. No writing lists and hunting for items one by one."

"It’s fine to talk about how online and in-store activities are supporting each other — that’s great. But must we (over)use “mobile,” per se?"