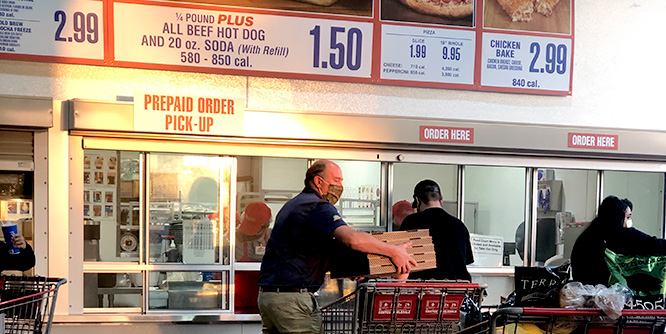 As first reported by Business Insider, Costco increased the price on its chicken bake, a cheese-crusted bread loaf stuffed with chicken, bacon and Caesar dressing, to $3.99 from $2.99. Prices on the 20 oz. soda went to 69 cents from 59 cents.

The moves gained attention because Costco rarely raises prices at its food courts.

“I was surprised, ’cause they never do increases on the items,” Georgina Gomez, a long-time foodservice worker at a Costco in Los Angeles, told the Los Angeles Times.

On Costco’s third-quarter analyst call on May 26, Bob Nelson, SVP, finance and investor relations, went out of his way to dispel rumors that the club might increase the price of its famed $1.50 hot dog and soda combo. Mr. Nelson said, “The price, when we introduced the hot dog-soda combo in the mid-’80s, was $1.50. The price today is $1.50, and we have no plans to increase the price at this time.”

In an interview with The Seattle Times in 2009, Costco’s co-founder Jim Sinegal jokingly threatened to “kill” current CEO Craig Jelinek if the combo price was changed. Mr. Sinegal said, “We’re known for that hot dog. That’s something you don’t mess with.”

At the grocery level, Costco has held prices firm on its rotisserie chickens, at $4.99, the same price as when they were introduced in 2009. Costco owns poultry and hot dog manufacturing facilities to keep prices low.

Costco has raised prices on dairy, beef, croissants, water bottles and other items this year, but appears to be absorbing much of the soaring input costs.

DISCUSSION QUESTIONS: Is holding prices on most food court items more important for Costco than on grocery prices? How might Costco’s price perception in an inflationary environment need to differ from big box and supermarket competitors?

Please practice The RetailWire Golden Rule when submitting your comments.
Braintrust
"Yes, keeping their food court items at the same price is a key component of the Costco shopping experience."

"Looking at the survey result, I am one of the few that voted that holding prices on the food court is more important than grocery prices."

"I’m curious what role the food court actually plays in the shopping experience at Costco."

22 Comments on "Should Costco raise its food court prices?"

“There are things you don’t mess with.” Costco knows this well.

It isn’t realistic to hold prices on food court items to the same prices as the 1980s and consumers expect price increases. Some of the prices for food court items at Costco are ridiculously low and there should be price elasticity in these items. Testing price increases at some stores would provide insights on the impact on demand.

Yes, keeping their food court items at the same price is a key component of the Costco shopping experience. Whole chickens at $4.99, $9.99 pizza and hot dog and soda at $1.50, etc. have always been a position that Costco was proud of, and attracted many members to come into the store for quick food instead of just warehouse shopping. Why ruin a winning combination for the Costco club member?

Costco has suffered inflation just as every other retailer suffers inflation. As such it’s unsurprising that some food court prices have risen. Overall, this may be a disappointment to some consumers but it is not a game-changer for Costco as very few people go there for just the food court. Indeed, more people are now visiting Costco as a hedge against inflation as buying in bulk means they can buy cheaper. In any case, the $1.50 soda and hotdog deal remains and that is Costco’s headline offer!

I’m curious what role the food court actually plays in the shopping experience at Costco. It’s one thing when your $4.99 chicken drives people all the way to the back of the store to get it, giving you maximum opportunity for many other things to end up in the cart. The food court is at the end of the shopping journey, and accessible whether you’re a member or not. So keeping that cheap almost doesn’t seem to matter – unless it does serve another role. I guess maybe it’s a temptation to bring other family member along and just have a meal at the end of the shopping trip? That would surely expand the basket. Maybe it plays a role in building customer trust that Costco is looking out for them? The comments seem to support some of that thinking – the end result is that consumers don’t get as upset when Costco raises prices in other areas because they feel like the company is keeping things as low priced as possible in other, highly… Read more »
5
|
0
-   Share

If they’re happy with the performance and profitability of the food court, why would they want to change it? The food court is a pretty iconic part of the Costco brand. Perhaps price gouging isn’t a Costco value?

Raising or not raising prices on a couple of food court items is not about the math. It’s about the symbolism. It’s about reinforcing a brand promise. Look at the almost silly conversation we are having about the price of a hot dog. And then look at the press Costco keeps getting. Costco will be raising prices on lots of items. They have to. There is no wiggle room in their razor thin margins. They will also be damned sure they maintain their crown as the price/value leader for all of retail.

Their $1.50 hot dog deal is synonymous with their brand so raising that price would immediately call attention to all other price hikes in the store. Shoppers don’t like it but they do understand that grocery price increases usually get passed through. But Costco has been marketing their incredible food court deals for years. Raising prices here would cause too much resentment.

They put a stake in the ground long ago and are continuing to stick to it. Good for them, good for their customers.

It’s okay to raise prices on food court items as they are not immune to the global inflationary environment and consumers are seeing higher prices in other cafe/restaurant/QSR environments. Just because it is okay, though, doesn’t mean that it should follow the same rules as regularly stocked items in the grocery store (and other assortments) – food court item pricing actions need to follow a different set of rules and logic (i.e. less frequent price changes to name one) than other items. It also is true that a move from $2.99 to $3.99 is quite significant (>33 percent) and higher than inflation elsewhere. In all cases, it is critical to leverage the right analytics to understand where to raise prices and where to hold prices and to optimize accordingly to offer the right prices to consumers on most important items while covering or increasing margin elsewhere. Costco does have numerous strategic advantages when pricing vs. big box and supermarket competitors due to their inherent volume discounts and large private label penetration. Their membership approach also… Read more »
2
|
0
-   Share

That $1.50 hotdog combo is a promise that Costco will be there for its customers, and it’s a promise of low prices. It’s as solid as any logo or tagline. It’s okay to raise the price of a giant can of beans, but not the $1.50 hotdog. It’s a perception builder.

The dog and soda have a meaning which has nothing to do with a tasty hot dog and refreshing drink. The truth is they could give away the dog and soda and one would not see it on the bottom line. Out of curiosity — how many people stop for the food court items when they are spending $100, $200, $300 plus on their regular shopping trips?

Margins should be measured at the basket level, (or in this case at the trip level). I’m sure Costco can maintain prices at attractive levels or the same levels at the food court as a brand statement, just as Walmart can keep bananas at never-be-beaten prices at the first aisle in the store.

Members know Costco is losing money, but they see it as a gift for paying their membership dues.

It is incredibly hard and nearly impossible to raise “sticky” prices that are well-established for consumers. There can be potential backlash and a solution is to have regular price reviews and adjustments so that consumers do not have anchors that can never be moved. Many retailers are learning this the hard way given that we have been in an inflationary and supply-constrained environment for the last few years.

So let me get this straight: which is more important, the prices on the company’s core products or some rather minor department (that’s likely a loss leader)? I think I’ll go with the first one.

Just reported on CNBC … “Costco CEO’s one-word answer to whether he would raise the price of hot dogs: ‘No.'”

Costco isn’t just known for certain food court items — their modern brand image is built on those items to a level that goes beyond iconic. Ask any Costco member what the price is for a rotisserie chicken, and you’ll always hear $4.99. Ask a Costco member the price of any standard grocery or produce item, and you’ll probably hear “I don’t remember” or a different number from each person. It’s engraved into the brand experience and that’s why the price stays the same. Costco can change other prices, but those iconic items are what keep their stores top of mind for many families. It’s a unique position to be in with their customers, and not many retailers can say the same.

Given that the prices at the food court are so well known, so much so that this even made the news, these items should all be considered loss leaders. However, the money has to come from somewhere. At least Costco’s name isn’t…oh say, the Dollar-ish Store.

As noted, Costco has done a yeoman’s job of maintaining prices in these inflationary times. Its customers value the warehouse prices more than food court prices. It is worthy to mention that the popular rotisserie chicken’s price has not changed since its introduction in 2009. This is basically a PR rather than a marketing story.

Costco should stick to their successful long term committed pricing strategy, including maximum margin markups as well as preserving several iconic price points, like the rotisserie chicken and hot dog and drink. This naturally results in price changes on many items and food court items can certainly be included.

Braintrust
"Yes, keeping their food court items at the same price is a key component of the Costco shopping experience."

"Looking at the survey result, I am one of the few that voted that holding prices on the food court is more important than grocery prices."

"I’m curious what role the food court actually plays in the shopping experience at Costco."