Why is Lowe’s moving its marketing ops under its merchandising veep? 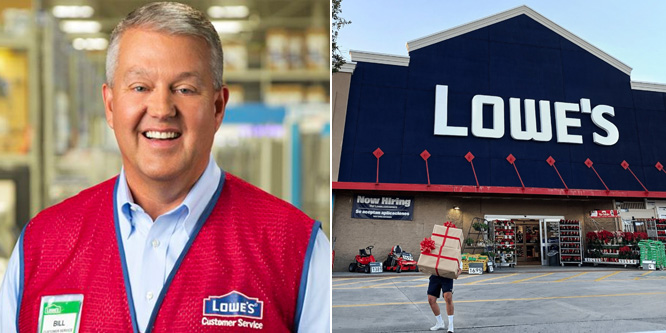 Marisa Thalberg, chief brand and marketing officer at Lowe’s, has left the home improvement retailer as part of a corporate reorganization.

Lowe’s said on Tuesday that it was doing away with the CMO role and that its marketing team would now report to Bill Boltz, executive vice president of merchandising. The retailer said that Jen Wilson, senior VP, brand and customer marketing, has been promoted to senior VP, enterprise brand and marketing and will report to Mr. Boltz.

A company spokesperson told Ad Age that the reorganization was necessary “to improve alignment across the business …, we need deep integration between marketing, merchandising and stores.”

Ms. Thalberg’s departure, CNBC reports, follows two straight quarters during which Lowe’s posted same-store sales declines against strong year-over-year comps. Lowe’s benefitted in 2021 from its customers receiving government stimulus checks and focusing more of their attention on their homes in the face of the pandemic. Consumers in 2022 have focused their spending on necessities and cut back on discretionary spending as a result of rising prices and economic uncertainty.

The retailer initially brought Ms. Thalberg in from Taco Bell where she served as global chief brand officer to modernize its marketing and branding. Under Ms. Thalberg, Lowe’s moved into several high-profile campaigns, including running commercials on ESPN during the NFL Draft broadcast. She was also key to new marketing initiatives at Lowe’s, such as Halloween trick-or-treating, and Valentine’s Day date night and Petco shops inside the chain’s stores.

The Ad Age piece points out that it’s unusual for retailers to place marketing under merchandising. Richard Sanderson, a consultant at Spencer Stuart, said the practice was more common in grocery more than a decade ago when “marketing was really driving weekly promotions and print circulars.”

Ms. Thulberg’s exit from Lowe’s is likely to be followed by others at retail as more companies look for answers to boost sales during a period when customer demand has slowed, inventory has piled up and companies engage in a steady stream of markdowns to move merchandise as the Christmas season draws near.

DISCUSSION QUESTIONS: Does it make sense for retailers to move their marketing operations under merchandising as they focus more on sales promotion activity? Do you expect retail branding to take a back seat at Lowe’s as a result of its reorganization?

Please practice The RetailWire Golden Rule when submitting your comments.
Braintrust
"Building a strong brand isn’t the same as merchandising. This feels like a short sighted move."

22 Comments on "Why is Lowe’s moving its marketing ops under its merchandising veep?"

Moving marketing under merchandising is a dangerous step by Lowe’s. The most likely outcome will be a promotion-driven business model and a slow decline in brand value.

I have long wished for better alignment between marketing and merchandising, and I admire Lowe’s willingness to take this bold, but risky step. However I always envisioned it the other way – merchandising reporting to marketing. I suspect several of my BrainTrust friends (I’m looking at you, Liza Amlani!) may take umbrage at this suggestion, but merchandising is marketing. Think back to the classic “4 P’s” of marketing: Product, Price, Promotion and Place. That’s pretty much a job description for merchandising. Hence why I always envisioned a future where merchandising reports to marketing. Nevertheless, I applaud Lowe’s for this move and will be very interested to see how things evolve there. Maybe they will change my mind!

Paula DEFINITELY takes umbrage at it. We sell products, not brands.

Dave I agree. Like you I see merchandising reporting to marketing a much more logical alignment of the two functions.

Agreed. An experienced and deft marketing leader drives both a strong company brand to build long-term customer relationships while keeping the weekly sales goals and promotional engine humming along.

Building a strong brand isn’t the same as merchandising. This feels like a short sighted move. Partly motivated due to a (hopefully) temporary inventory glut that needs to be cleared out. But just because you need to clear the shelves due to unexpected shifts in supply and demand doesn’t mean marketing should be focused solely on promotions. Lowe’s risks the slow degrading of its overall corporate brand image long term, and losing sight of the end to end customer experience across channels, if they focus too much on promotions and merchandising in their marketing organization.

Honestly this is the way it always was. Either under merchandising or a quasi-peer. Retailers don’t sell branding. They sell products. Then marketing and merchandising work together to determine which products they can buy specifically for promotion.

The ascendancy of marketing was a 21st century thing and, in my opinion, created as many problems as it solved, including them running their own IT departments.

Let’s put it this way — I’d rather marketing report to merchandising than the other way around.

Kohl’s did it. Need I say more?

While I do not advocate silos within any organization, the reporting line from marketing to merchandising does not seem to fit. The skill sets and functions are different, though they should be coordinated. Maybe this move by Lowe’s will be watched by other retailers to see how (and if) it works.

This move by Lowe’s is a bit of a head-scratcher. Let’s remember, Lowe’s reported annual income of $96 billion in 2022. One would argue a company this size can’t afford NOT to have a CMO reporting directly to the CEO, and second, moving a C-1 individual under merchandise will inherently reduce the impact of marketing initiatives. It’s unfortunate because I thought Lowe’s had terrific momentum from a marketing standpoint and was soundly executing uniquely experiential plays.

I reference merchandising as promotion.

I have been a marketing manager and a promotion manager. Each demands an entirely different mindset. Marketing is longer-term. Promotion is short-term. When marketing is the tail on the promotion dog, the company loses focus on the brand. While promotion is important, the brand is what carries a company into the future.

From my experience, that’s a mistake. Merchandising is short-term thinking: what did I sell today? Marketing is long-term thinking: how can we further the brand? To have merchants, who are incentivized by sales and profit and not long range brand goals (other than outside brands) not thinking in terms of the future. And maybe that’s what Lowe’s needs; sales now, but in the long run this will not play out well for them.

In my personal experience (at Kohl’s, years ago), the heads of marketing and merchandising reported to the president of the company — not to each other. (And the CEO had reporting responsibility for stores, finance, HR, and so forth.) Every company is different, but it’s important for merchandising and marketing to be aligned in their goals no matter what the org chart looks like.

I would argue (as a former merchant) that retailers are in the business of selling products and services, and the marketing team is there to support those goals along with overall brand-building. It sounds simplistic, but I used to say, “Own what you advertise — advertise what you own” to make sure the assortments and sales promotion efforts reinforced each other.

If these two can can play well together, and I’m sure they will, watch out. This could be a very dynamic move.

Marketing is part of merchandising anyway. Merchandising sells products and marketing needs to support it – hence the importance of alignment. This move though is caused by a leader exit, but Lowe’s has taken the right steps to fill in the gap. Only ad agencies and marketing consulting firms drive purely marketing focused sales businesses. This won’t affect branding or marketing initiatives at Lowe’s. I would venture that it would be stronger based on the reorganization under a profit center.

A brand’s value and the ability to fulfill on the promise should drive all decisions. I’m all for removing by silos but this move is backwards – marketing should drive merchandising.

I agree with a more product-first approach, not to discount marketing, but it has to start with the right product. From there, you can clearly define the features and attributes that are marketable. Will be interesting to see how this develops and if others follow.

A move like this may get Lowe’s through sitting inventory for a season and will look great on the bottom line. But the customer relationship towards the company brand could become more transactional, and defined mostly by who has the lowest price or is more convenient on any given week.

Braintrust
"Building a strong brand isn’t the same as merchandising. This feels like a short sighted move."