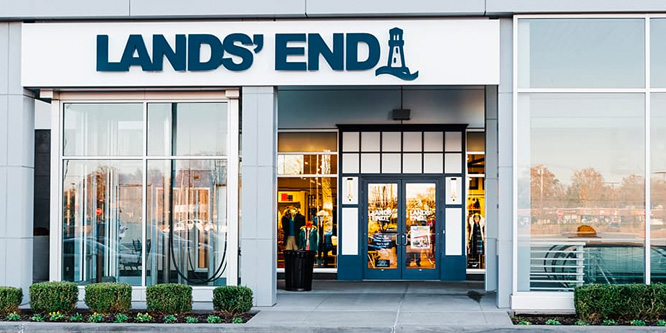 Lands’ End earlier this week said it had concluded its search for a new CEO with the hiring of American Eagle Outfitters president, international, Andrew McLean, who is slated to replace Jerome Griffith who will retire and become executive chair.

Mr. McLean will join Lands’ End as a member of its board and CEO-designate on Nov. 1. He won’t take over as CEO from Mr. Griffith until the end of the company’s fiscal year, January 27, 2023.

Josephine Linden, chair of the Lands’ End board, praised Mr. Griffith for his role in leading the company for five years.

“Jerome has played a pivotal role in generating significant e-commerce growth, developing and expanding Lands’ End’s uni-channel distribution network to include top partners such as Kohl’s, Amazon, QVC and Target, stewarding the Company through numerous successful infrastructure upgrades, and increasing the Company’s recognition and engagement with consumers through unique collaborations,” she said.

“I am confident that our digitally driven business model and highly loyal customer base has positioned Lands’ End well for long-term growth and success. I look forward to working closely with Andrew to ensure a smooth transition,” said Mr. Griffith.

Mr. McLean’s CEO-in-waiting status marks the second time in recent weeks that a major consumer-facing retail company has announced an arrangement to ease a new leader into their role.

Starbucks, earlier this month, announced the hiring of Reckitt Benckiser Group CEO Laxman Narasimhan to replace Howard Schultz, its interim CEO, who is back in his third stint leading the coffee giant. Mr. Narasimhan will join Starbucks in October and work with Mr. Schultz before taking over as CEO next April.

The approach taken by Lands’ End and Starbucks is not new to the retailing world. Marvin Ellison was hired in October 2014 to replace interim CEO Mike Ullman at J.C. Penney, who had served as interim CEO of the department store chain following the disastrous period in which Ron Johnson led the company. Mr. Ellison, who had been executive vice president for stores at Home Depot before joining Penney, did not officially become its CEO until August 2015.

Mr. McLean seems intent to build on the work of his predecessor.

“Jerome and his team have built a strong foundation, and I am excited to work closely with management and the Board to help Lands’ End leverage its many opportunities and drive strong, sustainable financial performance.”

DISCUSSION QUESTIONS: What do you see as the pros and cons of CEO succession plans that ease new leaders into their roles? Do you expect more retailers changing CEOs to follow similar paths as Lands’ End and Starbucks?

Please practice The RetailWire Golden Rule when submitting your comments.
Braintrust
"When the change is planned for and predictable, this definitely makes sense. Though, from my experience, the shift still happens very quickly."

"Conventional wisdom says that the first 90 days of any job should be spent listening."

"For sure there are more pros than cons to easing new leaders into their roles. The effectiveness of that strategy is up to the current CEO and the newbie."

16 Comments on "Will on-the-job training become a new norm in CEO succession planning?"

I believe easing new leaders into their roles gives them the best opportunity to be successful. Taking over massive, complex organizations is a daunting assignment for even the most seasoned executive. Providing a long on-ramp for a new CEO enables the new leader to gain a deep understanding of the culture, its people, its challenges and opportunities. And it’s also an opportunity for the company to evaluate the new leader while they are actually in the trench working in the business. Unless a company needs to make an immediate change, this approach just makes good sense.

When the change is planned for and predictable, this definitely makes sense. Though, from my experience, the shift still happens very quickly even when you plan extended time for a transition – people need to know who to go to, and the leader headed out loses relevancy and impact very quickly. But having them hang on in a consultant/available for advice role can be extremely helpful. The most carefully planned transition can still overlook those “oh, yeah, I forgot that was hanging out there” things that inevitably come to the fore at the worst time.

On the job training, even with CEOs, is a good thing. Lots of time to learn the business and the culture. Smart plan.

Many, many organizations have such succession plans. It is to a company’s advantage to groom one or more people over time to take the reins of a business. Experience and familiarity with the company add to the list of ingredients for successful leadership.

The pros may outweigh the cons in such a transfer of power (knowledge exchange, less disruptive to organization, cultural adoption, etc.).

With that said, there are indeed cons:

Starbucks was certainly a glowing success example. I wish the same for Lands’ End as they navigate these waters.

It’s odd to me that it doesn’t happen or that more CEOs aren’t home grown. My first few months at L Brands were spent in stores for “combat education.” A version of that at a minimum seems crucial for any exec.

There are more pros than cons with regard to CEO succession planning. More companies ought to follow this path because it provides the incoming CEO a runway to meet with customers, partners, employees and the C-suite that will be reporting to the CEO. Getting a view of the strengths and weaknesses before taking the helm is probably one of the most advantageous aspects. It offers tremendous insight that will shape how the new CEO will drive change in the most critical parts of the enterprise.

Sure this is a good idea. But why are they going outside the company? Why have they not developed the talent to take over the job?

Makes perfect sense to me. I worked for one company that brought in a new CEO. The guy (who shall remain nameless), stayed for half a day, went out to lunch and never came back.

It’s good to spend some time with everyone getting to know each other, cultures and attitudes. And the real state of the company.

Not to split hairs, but I much prefer OTJ “learning” vs training. And immersion is the perfect way to be a student of how a business’s moving parts mesh — or don’t mesh in some cases. The new CEO’s ideas and plans will certainly have been vetted by the board. But the implementation and execution can always benefit from some deep inside understanding of the business. I can’t help but think that Ron Johnson’s big ideas for JCP would have been executed differently if there had been a deeper understanding of the role that coupons and discounting played in the business.

My firm did a lot of work on JCP’s loyalty program. The most impactful day was the one spent with JCP’s internal research team, discussing what makes the JCP customer tick. I have said often, If Ron Johnson had just spent a few HOURS with the insights team, he would’ve had a real appreciation for his customer’s budget mentality, the need to feel like she was a good steward of her family’s money, and the role that coupons and feeling like she got a great deal had in her overall decision-making.

There is unarguable logic to the principle of “on the job training” or for a slow transition where the incoming CEO has to be indoctrinated into how the system works. This is where Nikki’s insightful comment hits the mark. If the goal is to “carry on” and “stay the course” that’s exactly what should be done. In fact, promote from within just to be sure little will change. If only the world would cooperate! I’ve always been fond of Roshi’s insight that “in the beginners mind are many possibilities but in the expert’s there are few.” The truth remains that most of what any organization needs to grow, succeed and own its territory — comes from outside that territory. “Leadership” is about seeing new possibilities or it’s simply not leadership. Every organization has higher possibilities that it doesn’t even recognize yet. The gift of seeing “what might be” can come from anywhere in the organization regardless of role, salary, gender, age, etc. But too often they are trained to stay in their proverbial box. Sometimes… Read more »
3
|
0
-   Share

Conventional wisdom says that the first 90 days of any job should be spent listening. This on-the-job training approach gives new leadership the chance to get to know the business before putting out a vision plan. Sounds like a win-win.

I don’t think it’s possible to put a new leader (at the CEO level) into a position without some type of plan. In a few cases (emergencies) it is needed. Otherwise, the “easing in” and transition period are important.

For sure there are more pros than cons to easing new leaders into their roles. The effectiveness of that strategy is up to the current CEO and the newbie. The current CEO must be committed to letting go of the reins and the newbie must strive to observe, listen and understand how the company is functioning today. But here’s the tricky part. Does the new CEO have to wait until the current CEO leaves before expressing and initiating plans? Someone referred to a “lame duck.” That could be the impression if the new CEO starts functioning as the CEO. But whatever they choose to do, it should be conveyed to the staff. The chain of command has to be clear or chaos ensues.

Even if the candidate has been a CEO in another company, no two companies are so alike in every key aspect, culture, etc., that transition from one to another is simply a matter of walking in and taking over the CEO role. What and how long the OTJ “training” should be will depend on the individual and the company they are going to be leading.

Braintrust
"When the change is planned for and predictable, this definitely makes sense. Though, from my experience, the shift still happens very quickly."

"Conventional wisdom says that the first 90 days of any job should be spent listening."

"For sure there are more pros than cons to easing new leaders into their roles. The effectiveness of that strategy is up to the current CEO and the newbie."