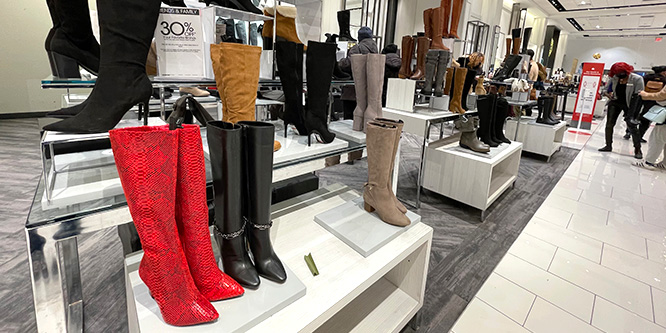 Macy’s competitors have been forced to pack-and-hold large amounts of excess inventory, but the department store giant claims that it was able to avoid that scenario in many cases by paying close attention to its co-branded credit card data.

The retailer heads into the holiday selling season with more than half of its merchandise being new, according to The Wall Street Journal. Not a total success, but an improvement compared to Kohl’s, according to the article, which placed large orders early in the year just as consumers began to reduce their spending on discretionary items.

Macy’s was able to identify some key consumer trends early in 2022 that enabled it to cancel orders and adjust its spending on merchandise in demand by its customers.

Executives from various departments began meeting monthly in January and discovered data from its co-branded credit card indicating that consumers had increased spending on food and gas as a result of rising inflation. They also saw that consumers had begun spending more on travel and entertainment outside their homes. The group also determined that demand for business and formal wear was picking up as people returned to their offices and attended social events, such as weddings.

Macy’s, according to the Journal, was able to adjust its ordering more easily than many of its competitors because it sells a lower percentage of private label merchandise, which requires retailers to take ownership of ordered merchandise earlier in the production cycle than with outside brands.

The department store retailer has been successful, at least in comparison to Kohl’s, according to Citi retail analyst Paul Lejeuz, who found that Macy’s gap between sales and inventory was much closer than its rival.

Macy’s and Kohl’s have joined a list of retailers that have been forced to address inventory challenges as demand has waned. Target, Walmart and others have canceled orders this year as they attempt to rightsize their inventory.

Chains are expected to step up their discounting this holiday season, with Amazon.com, Target and Walmart all kicking off pre-Christmas sales in October and putting pressure on other retailers to keep up or fall behind.

DISCUSSION QUESTIONS: Are some retail forecasting systems missing data important to projecting future consumer activity? How do you explain forecasting misses in 2022 when more retailers are relying on machine learning and artificial intelligence to make decisions?

Please practice The RetailWire Golden Rule when submitting your comments.
Braintrust
"This trend is really picking up steam in retail, and I’m excited to see Macy’s calling attention to this capability."

"It’s a combination of information, art and science that must be applied with the right parameters at the right point in time to decisions."

"Most retail forecasting systems are not missing data – the data is just not being leveraged. This is a trust issue."

I agree Macy’s has been better at managing inventory that many. However the numbers are not as good as presented. This is because Macy’s has closed stores so overall inventory levels have reduced. Moreover, Macy’s had pretty high inventory in 2021, when a retailer like Kohl’s did not, so the year-over-year comparisons are more favorable.

Macy’s has managed inventory better, but it’s not quite the success it is painted to be.

And margins on private-label goods should be better than outside-brand, all else being equal, so you trade off inventory intensity against profitability. There are no easy answers in logistics and beware anyone saying there are!

Using data to make decisions — how novel! No one can predict the future and while historical data can provide valuable insights — like some of the ones Macy’s rightly identified — it’s still a calculated bet. Macy’s got it right, and the other retailers placed different bets but got it wrong. No doubt they too used data too inform their decisions. Forecasting the future is a probability game, just like the weather. AI is not a panacea, especially when the factors that impact retail sales are so vast and complex.

Turns out there are several layers of decision making in managing open-to-buy. And Macy’s proved to be adept by establishing the right boundaries at the macro level. Those boundaries then gave the division and department levels of the business the appropriate guidelines for the current environment. Smart, insightful use of data!

How DO you explain it? It’s the age old question. An entire industry based on discretionary spending that is a fragile ecosystem and can change quickly coupled with long lead times. It’s possible forecast misses were made due to human intervention – leadership making strategic decisions to avoid stockouts. It’s a fragile balance. Canceling goods is a good short term strategy but what about the vendors who had produced goods but the retailer canceled? If they were financially hurt, try and reorder from them – they many need to find new vendors.

This is a very interesting application of big data to find actionable insights. Understanding the complexities that drive consumer demand requires multiple disparate data sources. The promise of AI and Machine Learning is that systems will be able to consume massive amounts of this data and find discrete correlations that describe patterns in behavior and, in turn, improve forecasting. This trend is really picking up steam in retail, and I’m excited to see Macy’s calling attention to this capability.

Why is it that more stores examine merchandise trends and velocities to learn what directions to mandate to buyers? Every company should have their top players sitting down and looking at consumer directions and determine if they are right to follow. No one will ever hit the bullseye dead center, but they will march past the others in the market. Good move Macy’s.

In my department store days, the mandate was that upper management be constantly in contact with the salesfloors, asking staff and buyers what was happening. Every day. Simple, and it worked incredibly well.

“The retailer heads into the holiday selling season with more than half of its merchandise being new. Is that really good news?”

Too many buyers purchase what they want to sell rather than what they might expect to buy. This tendency has been going on forever. Does one wonder if the data showed sales less than plan if they were required to buy to plan in any case?

Retailers, and often their co-brand credit card partners, are often missing the key data set that unlocks insights such as Macy’s here: the customer. This is but one case study of the value of a co-branded credit card and similar relationships with credit and charge (i.e., American Express) cards as well as the networks (i.e., Visa).

All that said, while Macy’s “has been successful, at least in comparison to Kohl’s,” it has a way to go in terms of being more centered on its customers and aligning its business accordingly.

Depending on the statistic you look at, roughly 80 percent of analytic algorithms are NOT operationalized across an enterprise. Sounds like Macy’s is changing this, where they integrated multiple data sources across the enterprise, developed smart ML models, ran them, found new patterns never before seen and incorporated these insights into their strategic decisions earlier this year. Driving business outcomes like this can be achieved through analytic rigor. There are many moving parts to the equation, but it starts with a company’s ability to leverage massive amounts of data sets on an analytics platform that can perform complex analysis in speedy time frames.

Most retail forecasting systems are not missing data – the data is just not being leveraged. This is a trust issue. Merchandising and planning decisions are more often made by humans and this is where retailers go wrong. They buy too much and over-assort. This is not new. They need to trust the tech and buys that can be manually manipulated need to be cut out of the equation.

Canceling orders, pack and holding at factory, and shifting forecasts are reactive strategies. Macy’s, like most brands/retailers, need to start with their line plan, increase their seasonless assortment, and leverage consumer insights to predict the right product at the right time and in the right channel. The cycle of excess inventory will continue until upfront changes are made to the way brands/retailers go to market. Macy’s is no exception.

It’s a combination of information, art and science that must be applied with the right parameters at the right point in time to decisions. The additional insights from Macy’s cards helped them in this case, however their stores are still stuffed with racks of highly discounted (and unsaleable IMHO) merchandise.

While I don’t doubt the possibility that some forecasting models are better than others, it’s very difficult to separate them from one that just got lucky (at least on this kind of anecdotal, one-time basis).

As for the role AI plays in this, the explanation is simple: much like flying cars in the ’50s, the possibilities have been greatly oversold.

Macy’s has clearly scored big! The ongoing issues with inventory levels have now become a part of every retailer’s business. Amid such circumstances, it’s even more impressive how Macy’s leveraged the use of customer data to evaluate the market demand. Decision-making is done based on insights from datasets. Most retailers nowadays have a significant amount of data, but the key challenge is extracting and processing the available data into meaningful information. However if the data sources are unreliable, the results would also be incorrect. Even Machine Learning and AI need appropriate data for deriving the right outcomes. Therefore, for concrete results, retailers need to analyze their data sources with utmost precision.

Braintrust
"This trend is really picking up steam in retail, and I’m excited to see Macy’s calling attention to this capability."

"It’s a combination of information, art and science that must be applied with the right parameters at the right point in time to decisions."

"Most retail forecasting systems are not missing data – the data is just not being leveraged. This is a trust issue."