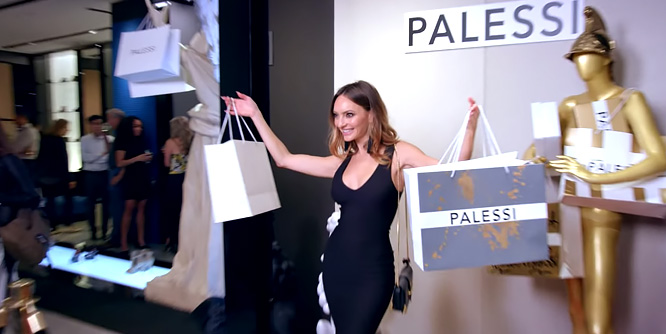 The store, named “Palessi” after a made-up Italian designer, Bruno Palessi, opened in a former Armani store in Santa Monica, CA. The company designed a luxury setting to support the ruse, displaying shoes on glass shelves and gold mannequins, launching a sleek website and Instagram account, and bringing in camera crews and velvet ropes for the grand opening.

At two invite-only opening nights, the attendees bought $3,000 worth of merchandise — one paid $640 for a $36 pair. Payless returned their money, let them keep the shoes and paid them a small stipend to be featured in a Payless commercial.

The attendees were recorded raving about the merchandise. One said, “They are elegant [and] sophisticated,” according to a video posted on YouTube. Another said, “I could tell it’s made with high-quality material.”

They expressed shock when told the shoes were from Payless. One laughed, “You’ve got to be kidding me.” Payless launched an “Epic Holiday Deals” campaign featuring the scam and attendees’ reactions digitally and on TV on Thursday.

The effort was designed to bring back some attention to the chain that emerged from bankruptcy last year and remind consumers about Payless’ affordable yet fashionable message.

The experiment also drew attention to how price and settings can influence perceptions of quality. Philip Graves, a consumer behavior consultant, told The Washington Post, “If advertising has high production qualities, people will think it’s better.”

By all accounts, the attending fashionistas laughed off being fooled with the reactions shared widely across influencer circles. Lisa Contino, VP of marketing at Payless, told Adweek, “The way we look at it, it’s never not cool to get a bargain”

DISCUSSION QUESTIONS: What lessons should be drawn from the attention received by Payless’ Palessi stunt? Are there ways to build on the effort and drive sales at the store level?

Please practice The RetailWire Golden Rule when submitting your comments.
Braintrust
"Not only has the buzz project been incredible, but the stunt brilliantly demonstrated the value proposition of Payless’ price-driven assortment."

"Color me suspicious who they invited and their motives before calling it “brilliant.” Perception is not reality. Reality is."

"The Payless experiment goes on everyday in thousands of stores and shelves. It’s called packaging."

This fascinating experiment in consumer behavior by Payless nicely illustrates the power of branding and social media. However, beyond being a clever PR stunt, one has to wonder what the long-term benefit of the experiment will be for Payless. While the message of how everyday footwear can be positioned and sold as high-end, luxury goods is clear, I’m skeptical that it will have an significant impact on Payless or its position in the market. This was a brilliant PR stunt, but I’m not sure it was more than that.

Brilliant PR AND marketing! Not only has the buzz project been incredible, but the stunt brilliantly demonstrated the value proposition of Payless’ price-driven assortment. Color me impressed on both fronts. Making good on the stunt by buying the shoes for the “duped” shoppers was a well-conceived (but likely also necessary) climax to the experience. Well done, Payless!

Dave Bruno … Bruno Palessi … I am on to you, Dave!

I loved reading about this event! Generating hype and excitement is great marketing, but post-event … I’m glad Payless refunded everyone who paid exorbitant prices for $36 shoes!

I would say you have to be very, very careful any time you want to pull a stunt like this. It could go horribly wrong. Embarrassed people can react in unpredictable ways. Payless was lucky that everyone was pretty good-natured about it and played along after the stunt was revealed.

More interesting to me, is how much the store environment changed people’s perceptions of what they were getting. It wasn’t that Payless’s shoes are really that much better than they used to be (I’m not convinced that *I* would be fooled by a $20 shoe with a $200 price tag, but I would never seriously entertain buying a $200 shoe in the first place). It was that a $200 price could be supported when you took the shoe out of the $20 ENVIRONMENT.

But that only works when you can create that environment end-to-end — from the social media presence to the website, to the store.

The Payless experiment is fascinating. It underlines that the context in which a product is sold really helps shape perceptions and price expectations. That said, as these were high profile invite-only events, there is an element of the “The Emperor’s New Clothes” about the stunt – where people feel under collective pressure to praise and make positive comments because they believe something to be a luxury product.

Absolutely brilliant way to get attention to the brand and the product quality. It also shows the power of branding. This experiment provides Payless with valuable consumer insights. First, their styling and product are appealing to shoppers and second, they can probably turn “Bruno Palessi” into a moderate-priced, high-styled house brand.

Great effort in creating buzz. Now it is time to build a long-term strategy from it.

Dr. Mina Bissell, a brilliant biologist, discovered that a cell’s function and biology depend on its surroundings. While marketing was likely the furthest thing from her mind, she reveals a universal truth: It’s the environment, the surroundings and our circumstances that determine how we interpret the world and how we function in it. We are, after all, made totally up of cells and, for good or ill behave according to our surroundings.

Sure this was a clever ploy by Payless. But really it’s a sad revelation about how easily duped we are.

The stunt also brings into question whether people (influencers or other) really know quality when they see it and touch it. There is no way that Payless can deliver a $200 ($640) shoe for $20 dollars. That means that those who would pay it were either trying to be nice, as stated before, or don’t know the true value of things.

Marketing is always about both illusion and reality, and illusion is waaaaay more fun then reality. I applaud what Payless did here if only to illustrate just how far illusion can take us. Now I will look harder than ever for authenticity and genuine merit.

Payless shows us how your “influencer” street cred can go from 100 to 0 overnight! I am curious if there were some strong negative reactions from people who realized they were duped, alas I know we will never see that tape.

Definitely a wonderful case study of how the right combo of branding, anticipation, exclusivity, and environment can prime the mind for what to expect. I love that they opened it in a former Armani store, people in the area would be familiar with this fact and instantly give credibility to another high-end retailer moving in.

A side story — the viral success of this campaign also highlights the fact that humans love to see those in elevated positions/experts getting tricked (or even exposed as frauds). It triggers a little dopamine rush and “power for the common people” bonding.

This is a genius idea. Now, how will Payless follow up?

It all comes down to this: It’s not about reality it’s all about perception. Psychological and emotional retailing. Beyond that, to the person that conceived the idea … get ready for job offers.

Influencer marketing is fundamentally flawed and unsustainable. Brand champions and loyalty are the future.

Precisely how I took your words — keeping it real.

We have told our clients the customer’s perception is the reality they have to deal with. Normally this is applied in cases were the perception is not good and needs to be changed. In this instance Payless was able to create a perception by presentation of a high-end shoe store. The lesson is clear. Perception matters.

But let’s face it, it exposes the foolishness of the American consumer.

This could also be accomplished in a much less expensive manner by using video focus groups of consumers choosing between two shoes that are very similar (an expensive one and a Payless one).

This was a brilliant stunt, let’s hope Payless backs it up with marketing that does not alienate its core customers. I agree with Nikki on quality; I would not be fooled by a $20 shoe masquerading as one that costs $600. There are differences that these astute guests should have noticed.

Macy’s changed the shoe departments to self-service in some of its stores this year. I stand by my initial comment that $200 shoes just don’t have the same appeal when stacked in a pile 12 boxes high. Retail is all about perception. The Payless experiment shows the importance of store design and visual merchandising, things that are too often ignored by some retailers these days.

Outstanding! This demonstrates the power of positioning and perceived value. If others don’t learn from this incredible stunt I’d be very surprised.

The lessons include things such as:

Hats off to Payless for an incredible hoodwinking effort. It’s a shoe-in for the best PR effort of the year!