Was the high-traffic Thanksgiving weekend a promise of things to come? 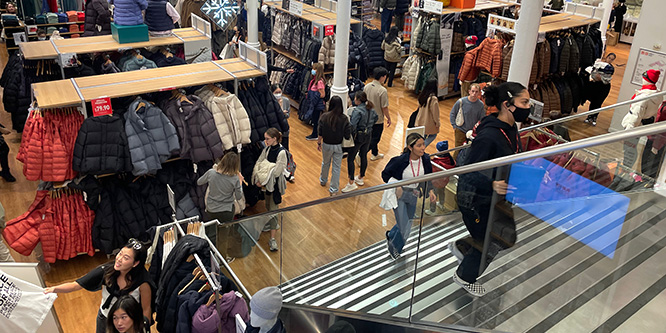 A record number of consumers in search of deals on holiday gifts went shopping in stores and online over the Thanksgiving Day weekend, according to the results of a new survey by the National Retail Federation and Prosper Insights & Analytics.

Seventy-six percent of consumers said they shopped over the past weekend, up from 70 percent in 2021. The actual numbers of those making purchases exceeded NRF’s initial forecast by more than 30 million people.

The number of people shopping in stores on Black Friday took a big jump. Nearly 73 million chose to do their shopping in-person, up from 66.5 million a year ago.

Small Business Saturday also brought shoppers to stores with 77 percent saying they shopped to support local merchants. A total of  63.4 million shopped in stores, up from 51 million.

“As inflationary pressures persist, consumers have responded by stretching their dollars in any way possible,” said Matthew Shay, president and CEO of NRF. “Retailers have responded accordingly, offering shoppers a season of buying convenience, matching sales and promotions across online and in-store channels to accommodate their customers at each interaction.”

“It is important to note that while some may claim that retail sales gains are the result of higher prices, they must acknowledge the historic growth in consumers who are shopping in-store and online during the long Thanksgiving holiday weekend and into Cyber Monday,” he said. “It is consumer demand that is driving growth.”

DISCUSSION QUESTIONS: What are your takeaways from the Thanksgiving weekend results? Will the 2022 holiday season, in the end, be distinctly different than in past years or will it largely conform to traditional patterns?

Please practice The RetailWire Golden Rule when submitting your comments.
Braintrust
"That’s excellent, but I think we have to wait until the end of January to see how the season pans out, and to see if retailers actually make any money."

"The retail companies that we work with also found a very positive long weekend both in U.S. and Europe with good increases over not just last year but 2019 as well."

"Yes. No doubt about it. Consumers wanted to shop and stores were well stocked. If they had more people working they probably could’ve made even more."

23 Comments on "Was the high-traffic Thanksgiving weekend a promise of things to come?"

The Thanksgiving weekend shopping results were promising. However it is not necessarily a leading indicator for the rest of the holiday shopping season. With inflation squeezing discretionary spending, it is difficult for shoppers to increase their holiday shopping budget.

Over the last few years we’d seen holiday creep, where retailers offered discounts much earlier than Black Friday and consumers took advantage. This year consumers didn’t have the financial bandwidth to buy earlier, bringing significance back to Black Friday. Even when the economy smooths out, I expect this extreme price-sensitivity and more planned holiday spending to stay. Consumers usually maintain shopping behaviors learned during tough economic times.

All year long the press has been touting inflation and recession and doom and gloom and all year long most retailers numbers have looked great, some fantastic even. I’m starting to wonder if, like the election, we’ve got a press tuned to the negative while ignoring the positive. But we shall see. I think if we come out of the first quarter in good shape, 2023 is going to be a lot better than we thought.

Agreed — consumer sentiment numbers have been getting worse and worse, and yet the retail numbers continue to meet or exceed expectations. Consumers are trying to be smart with their spending and where they are doing it — but they are still spending.

I keep talking about this with a stockbroker friend of mine. We keep reading about the impending recession (I even get a newsletter every day with the subject line, “Inflation is here and the recession is coming” offering helpful advice — grrrrr…), but there just isn’t a lot of evidence that it’s happening. Retailer earnings are going to take a hit, but that’s because they’ve had to push out excess inventory.

It’s not just “the press” anymore controlling the narrative. Social media and politicians are also huge factors, and many have axes to grind.

And perhaps psychic relief that the elections are over? Certainly space on the airwaves and YouTube for retailers to actually advertise, now that the political buys are done.

Thanksgiving, Black Friday weekend, and Cyber Monday results were strong. This will provide some comfort for retailers. However there is a question over whether this was demand pulled forward — people buying things they would traditionally get later in December because it was on offer. We won’t know that until patterns of trade normalize in the next couple of weeks. However all the retailers I speak to are cautiously optimistic about sales with a big emphasis on the word “cautiously”! Views on profit are more negative.

I’m pleasantly surprised by the reported results. I was pretty pessimistic going into the holiday. I did some informal parking lot surveys on Friday morning. It looked to me like the crowds were way down in my area. I’m cautiously optimistic about the season. It will be very interesting to see how the season as a whole comes in and how sales are distributed from week to week. I expect there will be some flattening of traffic as retailers have extended their holiday promotions into early October.

I think the Thanksgiving sales are a trend for the holiday season and beyond. Consumers are spending and clearly think that, despite the inflation fears, the economy will survive. The survey number that might mean the most is the return to in-store shopping. Of course this is what drives impulse shopping, upselling, and cross-selling — all things that push up the top line for retailers.

The jobs are there and finding people to fill them is more of a challenge. This is a weird time but, if you were an investor, the safe bet is still the U.S. vs. Europe, Africa, or Asia.

It is encouraging that more people shopped. To me that implies that, if inflation had not eroded 8 percent to 11 percent of their purchasing power, they would also have spent more. That is a good sign.

While traffic was up, profit margins were down and looming challenges to retailers became much clearer. The largest bump this holiday season was in Buy Now Pay Later, heralding a bleak Q1 2023 for retailers as shoppers struggle to pay for their holiday buys. And the relatively equal distribution of shoppers between online and offline channels underscores the need for retailers to maintain both physical and digital experiences to their customers to remain relevant. This will place added pressure on digital-only sellers to find physical outlets, and legacy retailers to spend money on improvements to their digital presence.

The weekend was a tremendous spark in the retail world. Customers did come out hard and will return again. However that return must be created through enthusiasm inside stores and on the net. That is the big job retailers must complete. Things after the weekend have to change, product presentations must look new. Offers well presented throughout the store and the internet. Keep it up.

Yes. No doubt about it. Consumers wanted to shop and stores were well stocked. If they had more people working they probably could’ve made even more. No matter how much people want to talk us into the recession or say “yeah but if inflation is at 11 percent.” The reality is shoppers are out in droves and retailers should be thrilled at the abundance since one in four jobs depends on it.

I think it’s a little early to be either buoyant or worried about the season’s outcome. So much more to be revealed, as in maintained margins and season ending inventory. OK, so there’s demand when the discounts are deep. How deep and how long do the discounts need to last? What happens when gift buying ends and the discounts normalize? And how will retailers read all these tea leaves in projecting demand for next year? There’s nothing traditional about this season. Yikes.

That’s excellent, but I think we have to wait until the end of January to see how the season pans out, and to see if retailers actually make any money.

Black Friday and Cyber Monday are no longer “events” so much as days- or weeks-long promotional marathons. It’s a cumulative story rather than a one- or two-day achievement. We won’t know the last chapter until well into January.

The one statistic that concerns me is “Thanksgiving weekend shoppers spent an average of $325.44, up from $301.27 in 2021.” That is an 8 percent increase. It doesn’t seem people are buying more depending on the inflation measures we look at.

The traffic numbers (in-store and online) are encouraging, although I haven’t seen comparisons to 2019 and I hope another panelist can enlighten me. If the traffic equates to spending, it’s a good sign for the rest of the holiday season. If this is “revenge shopping” after the past two years, bring it on!

Good sales will come at a price — between the promotional environment and the inventory glut at some retailers — but this helps prove what some of us have been saying for a while: Inflation does not spell doom for retail sales, any more than it did during the 1970s and early 1980s.

The retail companies that we work with also found a very positive long weekend both in U.S. and Europe with good increases over not just last year but 2019 as well. Whether this will continue over the whole holiday period is another matter. It is unlikely that consumers have the increase in household budget to do so and it could be that discretionary spend will now move to holiday food shopping if they have done their gift shopping early. We must remember that much of the merchandise being sold at high discount is old stock from previous years and hence retailers are clearing inventory. This is not a bad thing if it is selling well as there was concern over if it would sell. When times are tough consumers often splash out at Christmas to make themselves feel better. Let’s hope it continues, but caution: we may have to pay for it in the new year as credit limits are stretched and people really have to tighten their belts.

It’s quite clearly evident that customers wait for Black Friday and Cyber Monday sales to shop for holiday gifts. Almost every retailer had been dealing with the burden of excess inventory. Providing high discounts and deals has helped retailers bid goodbyes to inventory woes.

Additionally, retailers cannot sideline the prerequisites of omnipresence. Offering products at similar pricing on eCommerce and in-stores is no never a choice. To ensure customers’ trust, pricing and offerings must be consistent across all channels.

Braintrust
"That’s excellent, but I think we have to wait until the end of January to see how the season pans out, and to see if retailers actually make any money."

"The retail companies that we work with also found a very positive long weekend both in U.S. and Europe with good increases over not just last year but 2019 as well."

"Yes. No doubt about it. Consumers wanted to shop and stores were well stocked. If they had more people working they probably could’ve made even more."