What will happen to Kohl’s after Michelle Gass goes to Levi Strauss? 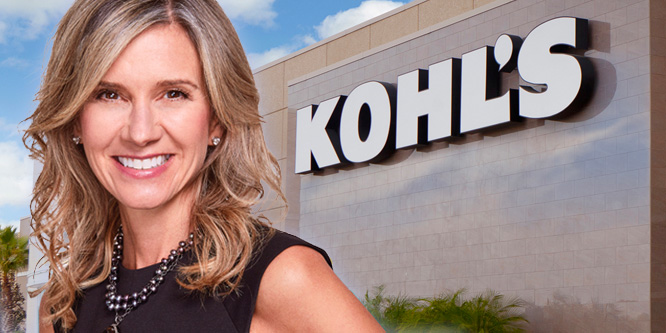 Michelle Gass is stepping down as the chief executive of Kohl’s as of December 2 and moving to Levi Strauss & Co in January.

She will become president at Levi’s, a newly-created position, as part of a plan that will have her become the denim giant’s next CEO within 18 months, succeeding long-time leader Chip Bergh.

Ms. Gass has spent the better part of two years not only trying to steer Kohl’s through the pandemic but also battling activist investors who have sought to oust her from her job and take control of the retailer’s board. Their goals have been to force the company to sell itself outright, spin off its real estate assets and/or operate its digital business as separate from its brick and mortar operations.

Kohl’s did seek a sale of the company under Ms. Gass, but talks with Franchise Group, owner of The Vitamin Shoppe, were called off after a three-week review that began in June.

Critics of Kohl’s during Ms. Gass’ tenure have argued that she hasn’t done enough to differentiate the chain from its many competitors. She has frequently pointed to Kohl’s relationships with Amazon.com and Sephora as driving customer traffic and add-on sales for the chain. Critics have pushed back that Amazon and Sephora gained more value from the relationship than Kohl’s.

The retailer announced in March that it is planning on opening 100 small-format stores, at about 35,000 square feet versus the company average of 80,000. The stores tout hyper-localized assortments to drive higher returns per square foot than the chain’s conventional stores.

Ms. Gass will be replaced on an interim basis by Tom Kingsbury, former CEO of Burlington Stores and executive vice president at Kohl’s. Mr. Kingsbury was nominated to Kohl’s board of directors by Macellum Advisors, one of the activist investors that has sought to take control of the retailer and boost its investment return in the short term.

“Despite a challenging economic environment, Kohl’s is well positioned for long-term success with its unique off-mall store footprint, omnichannel presence and loyal customer base,” said Mr. Kingsbury in a statement. “The board and I are committed to the continued refresh and innovation strategy Kohl’s has begun, the cornerstone of which is the terrific partnership we have with Sephora. I firmly believe in the long-term potential of this company, our associates and our ability to deliver value for shareholders.”

DISCUSSION QUESTIONS: What should happen at Kohl’s following Michelle Gass’ departure? How likely is Kohl’s next CEO to be more receptive than Ms. Gass was to calls by activist investors to monetize the retailer’s assets?

Please practice The RetailWire Golden Rule when submitting your comments.
Braintrust
"For the consumer’s sake, let’s hope whoever takes over makes the sales floor shoppable again."

"It goes deeper in agitation with staff and customers. They are in for a rough ride."

"Good for her for escaping the pressure cooker and landing on her feet at Levi."

25 Comments on "What will happen to Kohl’s after Michelle Gass goes to Levi Strauss?"

How could this be surprising after everything Ms. Gass and Kohl’s has been through over the last two years? The board activists got what they wanted, now I wish them good luck. The fact is Ms. Gass is a capable CEO and Kohl’s loss is Levi’s gain.

Michelle Gass was, quite rightly in my view, resistant to playing short-term financial games with Kohl’s. Now that she has departed there will be pressure for a permanent CEO who is receptive to the demands of activists. Given the poor state of the sales line, I suspect those calls will be heard. Unless this is balanced with someone with extensive retail experience, it will not bode well for the long-term health of the company.

I feel like Kohl’s has become a thrashing revolving door. The smaller format stores were an interesting idea, and obviously Levi-Strauss thinks Ms. Gass knows what she’s doing.

Activist investors do a LOT more harm than good (remember JC Penney). I’ve dealt with them in past lives, and they are worse than useless. Everyone’s an expert — until they’re not.

Can you name a mass chain that went successfully the smaller-yet-focused route? It was a disaster for Barneys and I cannot think of an example where it worked. Help me here?

Sounds like a repeat of SHOPKO after SuperValu dumped it.

Kohl’s needs to be very strategic in bringing in the next CEO and a merchant would be ideal to take the retailer to the next level. The right assortment and merchandising strategy is critical for the store’s survival. The strategy must be centered around the consumer rather than cash-flow which is all investors look at.

Spot on! Focusing on the consumer’s “why” will be key to stabilizing a competitive advantage and drive growth in an increasingly commoditized space.

Honestly, the uncertainty fueled by activists and an unsettled retail market will be furthered by Ms. Gass’ departure. She was effectively making positive strides while keeping unruly investors at bay. The future for Kohl’s will now be tenuous at best.

As for Levi-Strauss, they’ve landed themselves a bright and capable CEO who will propel that company forward.

Well, it’s not like she was making anything any better in the first place but, aside from that, I’d say they’re going to circle the wagons and start talking to private equity/VC. Go private, close stores, change vendors, announce new smaller stores, bring in a slash-and-burn CEO, rev up a PR campaign about the “NEW” Kohl’s and become a much smaller company — then take it from there.

At this point I agree that going private could be their only way to survive. They still have some solid positives, like their Sephora partnership and their private label beauty products.

Assortment is everything for Kohl’s at this point. I see no benefit from slicing off the online operations, but the terms “hyperlocal assortments” planned for the smaller format stores caught my eye. “Hyperlocal” in theory is good, but differentiated hyperlocal assortments are critical. I wish them well and will be watching closely, as perhaps lessons learned in the smaller stores can benefit the larger stores next.

Michelle Gass attempted to break out of the mold with a constant drumbeat of dissatisfaction as a backdrop. It was an untenable situation that left little room for long-term thinking. Good for her for escaping the pressure cooker and landing on her feet at Levi.

Mr. Kingsbury will pull every lever to lower costs and drive revenue with the hope that the stock price begins to tick up again. Assuming he gets the financials into a favorable place, Kohl’s will entertain buy offers from several investor organizations.

Kohl’s and the middle of the retail industry have experienced unprecedented disruptions and are under significant pressure to transform and evolve their business model. While the departure of Michelle Gass will lead to a reshuffling of Kohl’s executive deck, their mission of transforming and turning around their business model remains the same.

Considering the state of our economy, the declining sales heading into the holiday, and the concerning sales forecasts heading into 2023, Kohl’s needs a strong and impactful leader to help the company ride through these unprecedented times. As Kohl’s regroups, the company should employ a short-term tactical approach of driving customer-centric incremental value while, in parallel, building longer-term transformational strategic plans.

As we enter 2023, are the prospects of Kohl’s getting acquired a possibility? It will also be interesting to see how Michelle Gass performs in her new role at Levi’s.

For the consumer’s sake, let’s hope whoever takes over makes the sales floor shoppable again. Every store I have visited recently has been a mess.

Kohl’s has been struggling to find their niche for a few years. This is a great move for Ms. Gass. Levi’s has a well-defined brand and is loved by consumers. Kohl’s needs to find a leader who can help them find their identity in a market that seems to have moved on from the mid-tier department store.

I remember last year, I believe, we discussed the possibility of Kohl’s being purchased by Amazon to enter the brick-and-mortar format to save them from oblivion. Is this still being considered? I think they need to fix what they have now before moving on to new formats and I don’t know how much time they have before it is too late.

The ongoing drama means that the activist investor group is firmly in control and will prioritize selling the company. The permanent CEO must be a strong turnaround specialist (aka financial engineering) for the activists to secure their desired exit. The current economic market conditions will make the sought-after sale problematic at previous higher valuations.

Kohl’s future over the next four to six quarters will rest on cost-cutting vs. long-term investing for growth and on capturing cash flows today by paying rents tomorrow. Once the real estate sale-leaseback strategy gets underway, Kohl’s investment grade rating and margins will suffer as expenses rise, likely lowering the value of a future deal.

One wonders how these changes will impact employee morale and Kohl’s expansion strategy with Sephora, which Ms. Gass had described as “game-changing.”

There are two very different agendas and scripts at work here. One agenda will be the monetization of assets. That’s almost a given. The second agenda is creating an evolved merchandising model that can effectively compete in today’s market, especially with Target. Will agenda #1 pay for agenda #2? Or line the pockets of investors? And if #1 doesn’t fund #2, how will any reinvention of Kohl’s happen? Through the bottomless pockets of Amazon?

This is all about lining the pockets of the financial engineers. Have any of these strategies ever been good for the long-term prospects of the companies they get involved in?

It goes deeper in agitation with staff and customers. They are in for a rough ride.

Here is the entire message…” Mr. Kingsbury was nominated to Kohl’s board of directors by Macellum Advisors, one of the activist investors that has sought to take control of the retailer and boost its investment return in the short term.”

It isn’t quite time to write the obituary yet. But surely in the next five years there will be an obituary. Maybe that is precisely the objective of the activist investors. They have determined that there is no way to go except down for Kohl’s, so they want to get the cash while they can.

Based on whether or not the answer to the questions is “yes,” I think they might have been asked more simply: “Will Kohl’s next CEO be its last?”

Marketplaces are lagging behind and DTC brands are quickly catching the pace. So, I believe the right strategic move for Kohl’s would be monetizing their assets. Doing so will also help Kohl’s gain some liquidity. Additionally, Kohl’s should also consider initiating its own in-house funds and investing in brands that can enhance its current product assortment and upgrade its tech framework.

Braintrust
"For the consumer’s sake, let’s hope whoever takes over makes the sales floor shoppable again."

"It goes deeper in agitation with staff and customers. They are in for a rough ride."

"Good for her for escaping the pressure cooker and landing on her feet at Levi."