What should retailers do about social distancing renegades? 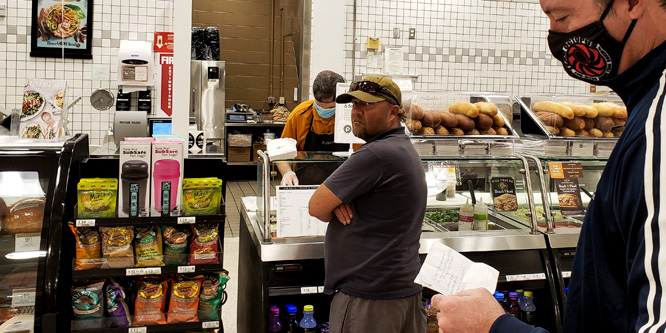 Last week, a security guard at a Family Dollar in Michigan was fatally shot after telling a customer to wear a face mask.

The more contentious issue is the requirement to wear masks in some states, cities and among a few chains, including Costco. The opposition comes from several sources. The New York Times reports, “The decision not to wear a mask has, for some, become a rebellion against what they regard as an incursion on their personal liberties. For many others, the choice is a casual one more about convenience than politics. The choice can also be a reflection of vanity, or of not understanding when or where to wear one.”

Store workers, who sometimes receive little training to resolve infractions, can overreact. Scott Nash, CEO of MOM’s Organic Market in the Mid-Atlantic region told the Associated Press he advises his staff to “use their common sense … Don’t be too lax and don’t be controlling or publicly shaming.”

DISCUSSION QUESTIONS: How should stores manage the minor and major confrontations stemming from social distancing mandates? What advice would you give to store associates who are asked to deal with infractions?

Please practice The RetailWire Golden Rule when submitting your comments.
Braintrust
"This is really a matter of public health, not a matter of individual liberty, when one person's failure to wear a mask endangers the health of others."

"Stores need to CLEARLY post rules in-store and in digital. Employees need training on how much to engage, when, to let something go, and when to call security [if available] o"

"It is not right to ask a store employee who was hired to stock shelves or ring sales to suddenly become a store enforcer. You need people who have training..."

44 Comments on "What should retailers do about social distancing renegades?"

Start by posting severely clear rules and expectations at the front door. And have mall security on speed dial.

Jeff, I agree with you. My concern is I believe many of the people we see violating the safety rules are doing it on purpose to create more chaos.

There probably will be that level of malicious mischief. Those who want to engage in that kind of conduct can spend all the mask-free time they want at the local jail. Or they can mop the floors in the local ICU.

It starts with proper training and reminders each work day with each member of the team working that day. If an employee has issues, they need to get management help ASAP to avoid any of the situations that have come up in the past few weeks.

I would treat these people the same way I would shoplifters. The difference is that they may be stealing people’s lives rather than product. People seem to obey the rules at the beach — no shirt, no shoes, no service — so what’s so different about this? This appears to be a red/blue issue when in fact it is a serious health issue that discrediting science won’t solve as the short term result is death. People are freaking out because they have been cooped up for 60 days as evidenced by the scene at the local Mashpee, MA ice cream shop this weekend. Lets all just chill — summer is just around the corner.

I could not say this any better!

The issues of enforcing social distancing and safety precautions in the COVID-19 era are among the most difficult challenges facing store teams. Clearly confronting those who disregard or disobey the rules is risky, but allowing people to violate the rules is also risky – and potentially for far more people. Unfortunately, I don’t see any easy enforcement answers — store teams are damned if they do (enforce) and damned if they don’t.

Store owners/managers who are lax on the rules are putting their staff in jeopardy – a customer who falls sick may have a hard time convincing a jury that the store was to blame, but an employee will have a much more convincing case. Long term, insurance companies are going to have to come down hard on the regions/operators who are putting health at risk by failing to use common sense.

There are going to be the renegades who go to a store with the goal of disruption – this is unfortunate and I’m not qualified to give advice on how to best avoid this disruption.

The best defense is a good offense. For more minor infractions, the ones that stem from consumers not knowing what’s expected, stores are best served by communicating their expectations before consumers get to the store. Social media, websites, PR, signage in front of the store, a location to pick up a flyer with store policies. From the minimal opportunity I’ve had to witness interactions, many store conflicts happen as folks are entering, because they weren’t aware of the policy. Stores should start there.

“Social distancing renegades” are criminals. Period. No one has the right to endanger the health and livelihood of other people. Unfortunately, the Store Operations Council’s next iteration of the Reopening Retail Safely document will have to address violence visited on frontline workers who are merely doing their job.

The incident in the Michigan Government house is a solid example of violating other people’s health and lives.

Rules need to be clearly explained and posted so that everyone knows what is expected. The difference between requests and mandatory demands also needs to be clear as this can be a source of confusion.

Minor confrontations are reasonably easy to deal with and can be managed by shop-floor staff and management. Most people are reasonable and will listen and act on requests made of them.

Major confrontations should involve security or the police. And, frankly, they should end with customers being removed from stores and being given a ban. However the examples above emphasize the need for caution and, preferably, for stores to have some form of professional security team that can intervene.

Part of the problem is that some communities mandate the wearing of masks, others simply recommend it, and still others provide no guidance at all. And the issue has been politicized — like so much in our society — because of the lack of clear guidance from the Federal government. (Not to mention lack of clear example-setting from the top.) This is really a matter of public health, not a matter of individual liberty, when one person’s failure to wear a mask endangers the health of others. “We’re all in this together” went out the window, it seems, after about six weeks. When refusal to wear a mask upon entering a store (even if masks are provided) escalates from confrontation to bad behavior to shooting people, it’s hard to know how an individual retailer is supposed to deal with it. Unfortunately, security guards will need to be more visible at store entrances so that other associates aren’t confronting a problem they’re not trained to handle. And — even more sadly — local law enforcement will… Read more »
8
|
0
-   Share

This is one of many, many concerns about reopening. It is not right to ask a store employee who was hired to stock shelves or ring sales to suddenly become a store enforcer. You need people who have training, and who have the enforcement skills and also the judgment to know when and how to use those skills. I’ve seen retailers post signs that detail government orders, sort of as a way to say “It’s not me – I’m just following the rules and you need to as well.” I’ve seen more prominent security both in stores as well as in strip mall parking lots. I will also say, I think some of the tension comes from people who had it in their heads that reopening meant getting back to “normal” and are dealing with the unpleasant shock of realizing that this is not going to be the case. I think some sympathy can go a long way – “It’s weird. None of us are used to it. It’s okay that you’re not sure what… Read more »
7
|
0
-   Share

The major concern is over wearing masks. Just as store patrons are required to wear shirts and shoes, a mask requirement means they should be turned away at the door if they are unwilling to comply. Second, this should be handled at the door by qualified personnel. Most stores will not allow employees to apprehend shoplifters; neither should they be required to enforce rules that might put them in danger.

Retailers must post the rules outside the business, reinforce the rules in any marketing and then have a person greeting customers at the door to double-check for compliance. It is helpful if local or state governments set the rules, but this will not always be the case.

It’s a double-edged sword with no good answer. You do not want your employees to be a police force but refusing social distancing is putting the population at whole at risk. I would recommend adding signage explaining what you require on the door and enforcing the policy from the management level.

The list of recent occurrences is highlighting the fact that there are built-up tensions regarding the handling of businesses reopening. Fortunately, retail stores already have processes in place for how to handle unruly customers, and the list of non-COVID related infractions for any given week in past years would be exponentially longer. Unfortunately, the current environment is highlighting that there is a growing divide about what measures are perceived appropriate for retail stores to mandate, and the spotlight will shine brightly on these types of incidents as they arise. The best advice retailers should follow: be gentle, be a good listener, but be firm. Patience is required as retailers cannot overreact too quickly to a perceived infraction and store managers should handle the situation in a gentle fashion, being careful not to stoke a fire or further provoke someone intentionally looking for an argument. But ultimately, we have to remember there are significant underlying health concerns which are driving these social distancing policies. Therefore, retailers must be firm in their resolve to remove customers who… Read more »
1
|
0
-   Share

Posting rules clearly at the entrance in unambiguous terms would help tremendously.

The confusion stems from some states “encouraging” as opposed to “mandating.” Coupled with that, if the stores don’t post rules for their facility it is a recipe for trouble.